PORTLAND -- When this decade began, they were within minutes of reaching the NBA Finals before an epic collapse in Game 7 of the Western Conference finals against the Lakers started what became a precipitous downfall.

By last season, they were at an all-time low, their record the worst in franchise history.

They used to be an almost impossible ticket, selling out more than 1,000 consecutive games during the height of their popularity, but now they can't even sell out a single game. 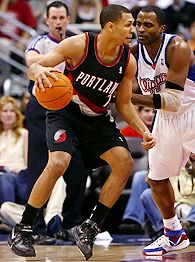 The Portland Trail Blazers have cycled from popular to pariahs, and now they are somewhere back on the upswing -- though there's still a long, long way to go, and big questions still to be answered. ESPN.com endeavored to take a broad look at what has gone wrong, and why the disconnect between the team and those around it -- both the newspaper that covers the Blazers and the fans who cheer for them -- has grown so huge.

One emblem of the disconnect is the situation at the Trail Blazers' home arena, the Rose Garden.

To truly appreciate how screwed up things have gotten at the Rose Garden over the past few years, consider the factor of the black seats vs. the red seats.

The club seats, luxury suites and the first four rows of courtside seats are black. And if you purchase a ticket for a black seat, the Blazers and their owner, Paul Allen, receive nothing.

The red seats begin in the fifth row of the lower deck, and those are a different story. Buy one of them, and the money goes to the team.

So on those nights when the building is not full, which is basically every night, the Trail Blazers are actually competing against the Global Spectrum Corporation for customers.

And once those folks arrive at the Rose Garden, whether their ticket was red or black, all the money they shell out for parking, peanuts, pizza or pretzels also goes entirely into the pockets of Global Spectrum. Allen and the Blazers don't get a single red cent.

Even Allen's courtside seat along the baseline falls under Global Spectrum's jurisdiction.

It's a crazy arrangement, one that makes even less sense when you consider how quickly Allen could fix it if he wanted to. The world's sixth-richest man, with an estimated net worth of $22 billion, Allen could simply open his checkbook and buy back the building he placed into bankruptcy two years ago. If he did so, the Microsoft co-founder with two mega-yachts -- including one with its own submarine -- would still have more than $21.8 billion left to play with. 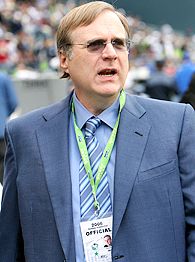 "For that to happen, you have to have a willing seller and a price that recognizes what an asset is worth, and if you don't have that, it's not going to happen," Allen told ESPN.com on Friday during an exclusive interview in a small office nestled next to the Trail Blazers' locker room at the Rose Garden.

Despite his vast wealth (and Allen's net worth was roughly $18 billion higher in 1999, according to Forbes), Allen took some bad advice and decided to finance $155 million of the $264 million construction at a whopping 9 percent interest rate, with no ability for an early repayment.

Nearly a decade later, when all the receipts from tickets, concessions, signage and parking were not even covering the debt service on the loan, Allen asked for a renegotiation and threatened to give back the keys if a new deal couldn't be struck.

It may have been seen as a bluff by the bondholders, but it wasn't -- and Allen followed through by putting the arena into bankruptcy. The Rose Garden and all of its preferred revenue streams were taken over by those bondholders -- a conglomerate including Prudential, TIAA-CREF, Farmers Insurance, and the John D. and Catherine T. MacArthur Foundation, who then hired Global Spectrum to run the facility.

Allen put the Blazers up for sale early this year but pulled the team off the market several months later. A total of 14 investor groups paid the $100,000 fee to apply for a purchase, and the top initial bids came in between $300 and $325 million.

Some believe Allen never truly intended to sell but wanted to hear from the bondholders exactly how much they wanted for the building, which turned out to be a 50-50 split of the potential sale price of the team and arena. After earlier offering 100 cents on the dollar for the remaining debt, Allen tried to get Global to take a bit less than $150 million early in the summer but was turned down.

One team official called it a game of "billionaire chicken," and the failure to reach an agreement to reunite the team and the building put Allen in the same predicament he was in before exploring the sale. The relationship between the sides is so contentious that a dispute over ownership of the actual floor that the Blazers play on was in dispute, and control of the former press seats on the scorer's table is in arbitration.

"Obviously there are multiple parties involved, and we haven't been able to reach any satisfactory arrangement up to this point, so we're exploring all our options. I'd be real interested to get any insight into their psychology," Allen said. "They've had a very steadfast, non-compromising position on these things. So given that, there are only a certain number of alternatives to explore, which we're exploring."

Asked exactly what those alternatives were, Allen would not answer.

"I'm not going to talk about that now," he said.

Could the Blazers move?

Relocating the franchise is certainly one of those options, and it has been speculated that Allen might try to move the team to his home base of Seattle if the recently sold SuperSonics eventually move to Oklahoma City, as many expect.

After a few false starts, NBA commissioner David Stern persuaded Allen and the bondholders to come to an agreement under which the team and the arena would be sold as a unit, but Allen abruptly halted all sale talks after Global attached a specific value to the arena.

ESPN.com asked Allen to explain why he decided not to sell.

He replied: "Well, obviously we undertook a rebuilding process a couple years ago, and I thought we had a really great draft with LaMarcus Aldridge and Brandon Roy, and that was one of the reasons I decided not to go through with the sale. Draft day, all the trades we made, it was just a real positive development for the franchise, and the fact that Seattle sold for quite a bit of money, too, and given the structure of what we were looking at, and the sales process -- and it was never a commitment to definitively sell the team, it was a process -- and for those two reasons, and for other reasons, I decided I was not going to sell."

Allen's next move is unclear, and he may feel he's best served by waiting. A vacancy 175 miles to the north might give Allen the leverage he needs to strike a more favorable deal with his bondholders and regain control of the Rose Garden, since Global Spectrum would conceivably be unable to operate the arena at a profit without its main tenant.

So Allen is sitting and waiting, and the Trail Blazers' long-term prospects remain just as uncertain as they were on trade-deadline day last February when Allen's representatives from Vulcan Inc., the company that manages Allen's investments, made the surprise announcement that Allen was planning to sell.

Some in the team's front office had asked the Vulcan representatives to hold off a day on the announcement so as to not steal the spotlight on any trades that might be announced -- a request that mystified the corporate-minded folks from up north and was rejected.

It was not the first time the folks from Vulcan had come down on the Blazers in a heavy-handed way. After Allen lost $105 million in the 2002-03 season, one-third of the staff was fired, with some employees saying they were asked to sign nondisclosure forms in order to receive their severance checks; then they were escorted from the building by security guards.

"Some of the best people were let go, and some of the worst people stayed. It was awful. It was done in such a way that people were humiliated," recalled former television producer George Wasch, who was not among those fired but rather left the team through retirement. "It had been an incredibly wonderful place to work, so unbelievably fantastic, but it turned 180 degrees."

Trail Blazers president Steve Patterson, who took over from the deposed Bob Whitsitt shortly before the firings, recalled his first meeting with Mayor Vera Katz.

"She said: 'Well, Mr. Patterson, aside from laying off 88 fine Portlanders, what else have you done since you arrived?' I didn't even get hello out of my mouth," Patterson said.