LAS VEGAS -- Kobe Bryant hit the biggest shot and made the biggest defensive stop after committing the gravest gaffe of the game -- all in the final 21.3 seconds.

Playing in a Team USA jersey for the first time, Bryant hit the game-winning shot over Tayshaun Prince with 6.6 seconds left to give the blue team a 105-104 victory over the white team Sunday in an intrasquad scrimmage. 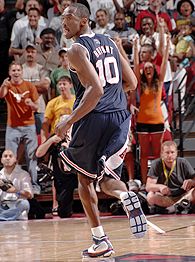 Bryant freed himself of Prince with a pump fake before hitting a jumper from 19 feet away to put his team ahead by one. After a timeout, Bryant defended LeBron James on the game's final possession and forced him to miss wide right on a short jumper from the lane that would have won it.

Afterward, Bryant took plenty of playful ribbing from teammate and Team USA veteran Jason Kidd after Bryant tried to call a timeout with 21.3 seconds left -- a no-no under international rules, under which only a coach can call a timeout.

The episode happened after Bryant brought the ball upcourt, came to a halt near the scorer's table and signaled with his hands for a timeout. The referee blew his whistle, then bailed himself out by calling a foul on Kidd, who was defending Bryant on the play.

Coach Mike Krzyzewski conceded after the game that the timeout rule has not yet been explained to the players in person, although they have been given paperwork with a list of the differences between FIBA rules and NBA rules.

"Situations like that can actually be helpful to us because sometimes the best way to learn the rule is by actually doing it," Krzyzewski said. "It definitely added to the intrigue."

Bryant made light of the episode afterward, joking that he actually made a "T" sign with his hands because he wanted the referee to call a technical foul on Kidd for elbowing him in the stomach "like it was a game from the '80s."

Bryant finished with 26 points on 10-for-22 shooting, including 4-for-9 from 3-point range, and blue squad teammate Carmelo Anthony led all scorers with 28. One of the more impressive performances came from rookie Kevin Durant, who shot 9-for-14 for 22 points for the blue squad.

For the white squad, Mike Miller scored 22 and made four 3-pointers in the second quarter, when both teams played nothing but zone defense. Dwight Howard shot 9-for-9 and scored 21, and James had 18.

On the negative side, the teams combined to shoot only 19-for-68 on 3-pointers (28 percent) and 20-for-34 (59 percent) on free throws -- the latter area coming as perhaps the biggest concern to Coach K, who lamented during the team's three-day minicamp that foul shooting was one of the primary deficiencies to hamper Team USA at the World Championship in Japan last summer. 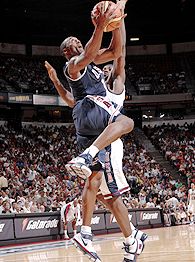 All in all, though, Krzyzewski summed up the three-day camp as an "off the charts" success.

"We have more shooters, and we have more talent -- veteran talent," Coach K said.

The players will scatter for three weeks before reassembling in Las Vegas on Aug. 14 to prepare for the Tournament of the Americas, at which two Olympic berths will be at stake. Team director Jerry Colangelo said Nick Collison will be added to the national squad for the Aug. 14 camp, and he also expects Greg Oden to rejoin the team after tonsillitis kept him away from minicamp.

The Americans must pare their roster to 12 before the Tournament of the Americas, and the players who appear most likely to be dropped from the active roster include J.J. Redick, Collison and Shane Battier. Going into Sunday's game, it appeared Durant would be on that cut list, as well, but his performance Sunday clearly was giving Krzyzewski and Colangelo something to think about.

Colangelo also said a squad of young NBA players, including Brandon Roy, will be brought to Las Vegas for the next stage of camp to compete against the senior team in scrimmages. The final roster for the Tournament of the Americas does not have to be submitted until 24 hours before the competition begins -- a big difference from what will happen next summer (assuming the Americans qualify for the Olympics), when the final 12-man Olympic roster must be submitted by June 28, about six weeks before the Games start.

Sunday's game attracted an announced crowd of 15,132 to the Thomas & Mack Center on the campus of UNLV, and Bryant was clearly the crowd favorite -- even hearing a "Ko-be, Ko-be" chant as he dribbled the ball on his team's final possession before hitting the winner over Prince. But up until that point, the play that got the crowd most charged up was when Bryant drove in on a break and tried for an up-and-under reverse dunk, only to have James block the shot and send Bryant flying into a row of photographers.

"His big, grown-up body knocked me off-balance, so I have to get used to playing at a lighter weight," said Bryant, who has dropped 19 pounds since the end of the NBA season.

The biggest groans of the night were directed at Michael Redd, who shot two air balls in the first half that missed the rim by several feet. Redd, also making his Team USA debut, shot 4-for-10 on 3s and finished with 17 points.

Other noteworthy items from the box score: Bryant had five steals and five assists; Tyson Chandler grabbed a game-high 13 rebounds; Deron Williams had nine assists and five turnovers; Chauncey Billups had seven assists and four steals in just 19 minutes; and Kidd had eight assists and six rebounds to go with his two points, which he got by converting his only field goal attempt of the night.