Jerry's Kids -- aka Team USA -- are due back in Vegas early this week, and there will be more of them than ever before.

Beginning Wednesday and continuing for several days on the campus of UNLV, the U.S. senior national team will resume training in preparation for the Tournament of the Americas qualifying tournament, at which two Olympic berths are at stake. 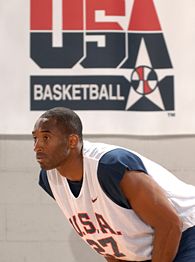 Only a dozen top pros will wear the red, white and blue when the Olympic qualifying tournament begins, but more than twice that many players will be wearing Team USA jerseys while practicing for the tourney for seven consecutive days. More than a dozen fresh faces, including Jason Kidd and Kobe Bryant, are with the team, but a majority of the newcomers have been brought in to comprise a practice squad that will scrimmage against the senior team in the days leading up to the U.S. opener against Venezuela a week from Wednesday.

Team director Jerry Colangelo devised assembling a scrimmage team to get a new generation of American NBA pros into the national team pipeline years in advance of the 2010 World Championship in Turkey and the 2012 Olympics in London, which is why eight players -- Devin Harris, David Lee, Al Jefferson, Aaron Brooks, Channing Frye, Jeff Green, Jason Kapono and Andre Iguodala -- will get a taste of what it's like to be a part of USA Basketball. Scrimmage team members Monta Ellis and LaMarcus Aldridge pulled out on Monday with injury concerns.

"Basically, this select group are players we felt would give our senior national squad the best possible opportunity to prepare for the FIBA Americas Championship," Colangelo said.

On Monday afternoon, Team USA announced that Shane Battier and Kirk Hinrich have withdrawn from training camp and consideration for a spot on the Tournament of Americas roster. It was also announced that Nick Collison was added to the senior national team program.

Chris Bosh also withdrew from camp on Wednesday afternoon due to a foot injury.

Of the 15 players expected at camp, three will be cut by the time the tournament roster is submitted on Aug. 21 -- which gives us a perfect jumping off point for getting into our list of the top 10 questions for Team USA midway through the summer of 2007:

1. So, who are the three cuts going to be?
It's too soon to say with any certainty, of course, but it is safe to assume that Redick will be among them. Durant is going to have to be mighty impressive to stay out of the final three cuts, but his 22-point performance in the team's public scrimmage last month has given him at least a fighting chance.

Assuming Durant is a cut, the last cut likely will come from among the quartet of Prince, Redd, Miller and Collison.

2. When do we get to see these guys play?

The Americans finish first-round play two weekends from now (Aug. 25-26) against Canada and Brazil before moving on to the second round for crossover play against the four surviving teams from the other pool, which includes Argentina, Uruguay, Panama, Mexico and Puerto Rico.

3. The Americans will win it, won't they?
Well, it doesn't really matter if they win it, because all they have to do is emerge victorious from their semifinal match on Sept. 1 to clinch one of the two Olympic berths. But yeah, they'll win it.

4. And who will be second?
The favorite right now is Brazil, which will have NBA players Leandro Barbosa and Nene Hilario. But unsettled contract situations have put the participation of Anderson Varejao and Rafael Araujo in doubt.

The defending Olympic champion, Argentina, will be without all its NBA players except Luis Scola and Carlos Delfino. Puerto Rico -- which defeated the U.S. at the 2004 Olympics -- will be led by NBA players Carlos Arroyo and Jose Juan Barea.

Canada has secured a commitment from Samuel Dalembert, who received his Canadian passport last week, but none from Steve Nash, who is busy playing rec league soccer in New York these days.

6. Will there be any drama in this tournament?
A lot depends on Kobe Bryant, who still owes the public a clarification about where he stands regarding his future. Bryant formally requested a trade from the Lakers earlier this summer, and he has said nothing publicly since then to indicate he has backed off it. During Team USA's minicamp last month, Bryant wouldn't go near the subject.

7. Any other drama?
Well, the race to sew up the last couple roster spots for the Tourney of the Americas should provide for an interesting end to camp. Last year, there were a lot of hard feelings when Bruce Bowen and Gilbert Arenas were the final two cuts.

8. How many Team USA players who compete in the Tournament of the Americas will make the Olympic roster for Beijing?
Again, it's too soon to tell for sure, but if they all stay healthy, Bryant, Kidd, James, Anthony, Howard and Stoudemire should be on the team that goes to China.

You can add Dwyane Wade and Elton Brand to that list if they've recovered from injuries, which leaves everyone else competing for four spots, at least one of which will go to a shooter -- Joe Johnson, Miller or Redd -- and another of which will go to a backup point guard from a group that includes Billups, Williams, Hinrich and Chris Paul.

Another big man also will be needed, with Bosh the leading candidate, but Carlos Boozer is a contender, too -- and that'll make 11.

9. And the 12th roster spot for Beijing won't really matter, will it?
Well, that was the feeling in 2004 when the USA Basketball selection committee stuck Emeka Okafor in the 12th spot just prior to Athens when it could have gone with Redd or another shooter to counter the steady diet of zone defenses the Americans were about to face. Okafor, by the way, did not score in the Olympic tournament. His teammates tried to get him on the board by repeatedly running plays for him in the fourth quarter of a blowout win over Angola, but Okafor couldn't convert.

10. So who's the early favorite to get spot No. 12?
I give the nod to Chandler, because I've spoken a lot with Colangelo about his concerns over where the team may be weak, and I know he wants an extra line of defense and a shot-blocking presence near the basket. But if Brand and/or Bosh falls out of the picture, I can see Chandler getting the 11th spot and the 12th spot going to an additional shooter, either Johnson, Miller or Redd.