People love to inquire of my post-basketball intentions.

Perhaps more than I, my interrogators know how quickly my life can change. It is rare that a professional athlete plays past the age of 40; more likely, those of us lucky enough to be given the opportunity to whore ourselves out to the highest bidder will produce careers much shorter.

I constantly maintain that I really have no idea (a) what I will do when my days of being a sports strumpet are over and, more important, (b) when said eventuality will occur.

I would wager that few athletes truly choose when they will end their respective careers. When the dust and Ben-Gay clears, we are no different than the weekend warrior who, forgetting that his muscles are no longer trained for stretching a double into a triple, blows an Achilles trying to slide into third. We are competitive and stubborn, two qualities helpful in our quest to become at least better than average, but are also characteristics which usually do not lead to a peaceful retirement at the top of one's game.

I read recently that Mark Pope, a longtime professional basketball player, most recently for Denver, was released at the end of training camp with the Nuggets. In an interview, Pope mentioned that he plans to enter medical school in the fall and was thankful for the opportunities basketball had afforded him. He seemed neither embittered nor broken by the fact that his playing days might soon be coming to an end.

It would seem easy to mock Pope's career. He has not been a star since his playing days at Kentucky ended. His own coach once said, "He's not a great player, but he's a guy that helps your team exist." High praise.

But, let us not forget that, regardless of his exact standing within his peer group, it could easily be said that Pope is among the best 1,000 basketball players in the world.

The math is not difficult. There are approximately 450 players in the NBA per year. Pope has proven that he is certainly a qualified NBA player. Even if we allow that there are somehow another 500 players in the world as good, scattered as they might be in remote outposts of European basketball or Tibetan mountainsides, we would still be safe in our conclusion.

Think about that for a second. There are, give or take, six billion humans on the Earth. How many people will ever exist among the top .0000167 percent of the world's population ... at anything? In fact, it is a sobering thought. How does one walk away from a field at which he is that able?

I admire Pope's decision immensely. He must be an enlightened human being (and I say that without a lick of sarcasm). 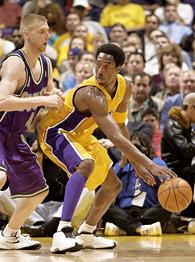 Obviously, by writing about him, I am using his as a corollary to my own life. If I were a good writer, I would have somehow disguised my intentions and used symbolism or sleight of hand to conceal that I was actually selfishly discussing my own life yet again. But I'm not. We all live with my ineptitude, and then we move on.
I daresay that Pope has had, as of now, a more successful career than I. Will I, at some point, realize that I have used the game of basketball for all I could hope and choose to move on? I have my doubts.

As of two years ago, I assumed that the end of my basketball career would come either at the hands of a catastrophic knee injury or because of some girl I might meet along the way. I have realized that there are few injuries from which one cannot be rehabilitated (see also: kidney and spleen rearrangement -- if that wasn't enough to catch my attention, I don't know what would be). I have also come to discover that I am not quite the stable being I would like to be. Convincing someone that I am willing to be coerced into changing my life for her might not be in the cards just yet.

In a way, each year I play makes it more unlikely that the next year will be the last. (As long as that year does not involve a trip to Russia or the emergency room. Those years tend to hasten the retirement process.) We professional basketball players are like aging strippers. We tell ourselves that we will do it until we have set aside a few extra dollars for the unknown future but, before we realize what has happened, we are addicted to the cheers and the fast-paced life.