I'm not sure how it happened, but it seems I am a basketball player again.

I recently joined a team whose name I don't entirely know in a league that could best be described as unstable. And I almost had to beg to get this opportunity. It is as if a fiction writer is actually behind the scenes, pulling the strings on the crippled marionette that is my life.

At some point in the last month, I decided that I needed to start playing again. I realized that if I actually wanted to have a chance to get back to the ever-elusive NBA, I probably ought to be in so-called game shape. Although my workouts in Kansas City have been great, they don't really simulate the up-and-down of an actual basketball contest particularly well. It turns out the game is not played on a treadmill.

The problem with my decision is that the prospect of playing in one of the minor leagues was, at the very minimum, distasteful, and at worst, suicide-inducing. I have played for the Yakima Sun Kings of the CBA and the Kansas City Knights of the ABA. Strangely, those two teams allowed me to have some of the most fun of my basketball career -- mainly because of the teammates I had there. Without some very good dudes to help make the situation tolerable, I probably would have quit playing the game.

My ultimate rock-bottom basketball moment occurred in a room in a Holiday Inn surrounded by the thriving metropolis of Sioux Falls, S.D. It was late November, the ground was completely frozen and I spent the night wondering what exactly I was doing with my life. I had not yet played in the NBA, so I could not really see the point of earning a pittance to travel around in buses across the upper Midwest. (I was called up later that year by the Atlanta Hawks, so apparently there was hope on that night. I just couldn't find it at the time.)

The problem with this year's plan to regain a foothold in the basketball world was that most minor-league teams are in really, really bad cities. Over the years, I have decided that there are about four places in the U.S. that I could live. Minor-league teams exist in two of those. Fortunately, Los Angeles is one of the locations that does currently support minor-league basketball. Strangely, for a guy originally from a town of 700, I actually really like L.A. I can't necessarily explain it, and it is doubtful that anyone wants me to try, so I won't. Suffice it to say, though, that it beats the hell out of Bismarck, N.D.

In addition to being a place I actually like a little, Los Angeles is the city of residence of the second-most amount of people I know. So, a relocation there, for whatever amount of time, seemed to make sense because of my built-in fan base, as it were. Additionally, I am working on a television project (about which I cannot seem to actually write; instead, I feel the need to refer to it constantly in order to make myself appear cool). I made several trips to L.A. this fall to work on said project and would need to be in the city more this winter anyway, so it made further sense to reside there for a while. 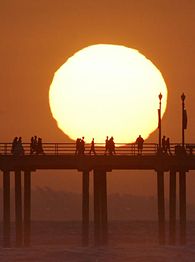 Two other factors influenced my decision. Not to be lost in the shuffle of my burgeoning personal multimedia empire is the book on which I am working. It would seem that I could write that book from anywhere -- and that is certainly true ... as long as anywhere does not include Kansas City. I am not trained to be a writer, so I know very little about the craft, but in my limited experience it would appear that it is difficult to write out of one's home, especially when that home is shared by two brothers anxious to distract the writer at everyone's (in)convenience. (This is not to say that I dislike living with the younger Shirleys. That would be entirely false. It's just that it becomes too easy to do nothing if I am surrounded by like-minded people all of the time.) At any rate, I felt that some separation would do us all some good.

I began the last paragraph with a topic sentence that suggested I had two more reasons to support my argument, but the second now eludes me. Deal with it.

Ah, yes. (It took a pull on the beer bottle to get my mind realigned.) My other reason for a move away from Kansas City was that I have been there too long. I am not used to living in the same city for any length of time. Since college ended, seven months in Greece has proved to be my lengthiest stay in any one particular place. I have always returned to Kansas in the interims, but it has usually been for three- or four-month stays while I decided my next move. Of course, I always complain about this lack of stability -- because that's what I do. But, as the last two months unfolded, I realized that I needed to move, if for no other reason than because that is what I'm used to.

In all actuality, I was ready for a trip to Los Angeles, whether or not I could find a team to play for. I could justify it in my mind and, once given the go-ahead from my too-kind aunt and uncle, Tom and Lynne Shook (who live in L.A. and told me I could use a room for a while), I was ready to make the move. But, since I was headed to Southern California anyway, I thought I might as well try to find a team to pay me for my trouble. And so I set about it.

Paul Shirley has played for 11 pro basketball teams, including three NBA teams -- the Chicago Bulls, the Atlanta Hawks and the Phoenix Suns. His journal appears regularly at ESPN.com. To e-mail Paul, click here.