With the election of Joe Dumars last year and the nomination of Adrian Dantley and Chris Mullin this year, we've seen a brighter spotlight on some of the supporting stars of the 1980s and '90s.

So, I started to wonder, which other players in this category deserve Hall of Fame recognition?

I'm not talking about all-time greats like David Robinson, Patrick Ewing, Karl Malone, John Stockton and others, who should expect immediate induction when they are eligible.

I'm thinking instead of complementary players, who tend to be overlooked but who were nonetheless essential to their teams.

Since Dantley and Mullin have received recognition already by being finalists this year, I won't include them here, even though they are still on the outside looking in. I made the case for Dantley a year ago, and Mullin is also a strong candidate.

In ranked order, here are the next five supporting stars from the 1980s and '90s I would like to see in Springfield: 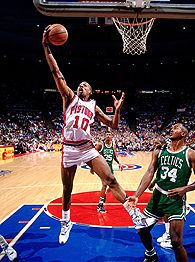 Dennis Rodman
Sorry, Charles, but Rodman is by far the best rebounding non-center in basketball history. He led the league in rebounding seven times (more than great rebounding forwards Bob Pettit, Elgin Baylor, Jerry Lucas and Charles Barkley combined). But not only was he winning rebounding titles, he was blowing the competition to smithereens.

Even Wilt Chamberlain wasn't hammering the competition by such fat margins. With a wiry 6-7, 228-pound frame, Rodman was out-boarding behemoths.

Rodman often dove into the stands to get offensive rebounds, just to give his team one more shot. He owns the playoff record for 11 offensive boards in a single game, which he collected twice as a Chicago Bull in the 1996 Finals against Seattle.

Michael Jordan, who averaged 27 points but hit just 41 percent of his shots in the series, won the Finals MVP; Rodman, who averaged 15 rebounds per game, was just as deserving of the honor.

Rodman won seven NBA All-Defensive first team awards and was voted Defensive Player of the Year in 1990 and 1991.

Rest assured, he is also the only player who said he wanted to play a complete game in the nude. He was spirited, never dull. How about his lining up on the free-throw lane with his arms folded?

How his antics will mesh with the Hall's "total contribution" criterion for selection is hard to tell. But it says here that a player who has piled up these distinctions ought not to be shut out for wearing a wedding dress or changing his hair color each day of the week.

Rodman has been retired for the necessary five years to be eligible. But the trustees of the Hall of Fame can determine that if a candidate has "damaged the integrity of the game of basketball" he may be "deemed unworthy of enshrinement and removed from consideration." 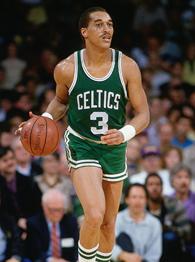 Dennis Johnson
I argued for DJ's inclusion in the Hall last year. Since his No. 3 already has been raised to the rafters alongside other greats in Boston's makeshift heaven, all that remains is for the highest honor to be bestowed on him posthumously.

It's hard to figure what's kept him out. Here's one thought:

Dennis Johnson deserves entry into the Hall of Fame, but not because he's gone now. He deserves it because he was that good.

Bill Laimbeer
Laimbeer was once described as having the "vertical leap of an anchor." True enough.

But never mind. His tippy-toes 3-pointers are fixed in the mind's eye of anyone who recalls the rough-you-up Pistons, who made consecutive Finals trips from 1988 through 1990, winning the last two.

Laimbeer is the paradigm case of someone who was effective beyond his numbers. He did a lot of things that went unnoticed, like the 13 points and 13 rebounds he averaged against Portland in the 1990 Finals as Detroit won its second straight title.

Playing below the rim, Laimbeer was essential to the Pistons' defensive unit that flummoxed Chicago, mainly by applying "The Jordan Rules," from 1988 to '90. The Pistons' dominance culminated with a 93-74 strangling of Chicago in Game 7 of the conference finals in 1990, when they held the Bulls to 31 percent shooting.

A message to Hall of Fame voters: Dust off your record books and check out Laimbeer's consistency and durability.

Try counting the centers who hit 84 percent at the free-throw line and 49.8 percent from the field for their careers.

Mean Bill also had 1,000 rebounds three years in a row in the mid-'80s, before the Pistons started pumping.

Durable? The guy missed just nine games out of 1,075 in the first 13 years of his career. That is no misprint.

And the Hall won't take him?

I think Detroit came out ahead in the deal. 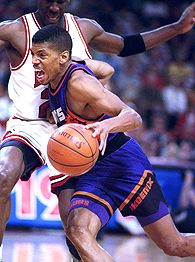 Kevin Johnson
KJ was a slithery blur attacking the basket. Whenever great, small guards are discussed, Johnson is overlooked. That shouldn't be.

When Johnson was healthy enough to play 65 games or more (which he did in nine of his 13 seasons), he put up 19 to 22 points and nine to 12 assists per game.

His high-water mark was arguably the 1993 playoffs. Though he missed 33 games due to hamstring problems that season, KJ led the Suns to the Finals. With the Suns down 2-0 to the Bulls, Johnson set a Finals record by playing 62 minutes in Game 3 (all but one minute of a triple-overtime win) as he scored 25 points, nine assists and seven rebounds.

With Phoenix facing elimination in Chicago, Johnson posted 25 points and eight assists in a 108-98 victory. Phoenix then lost Game 6 at home, as Johnson scored 19 points with 10 assists.

Maurice Cheeks
Mo Cheeks was a textbook point guard -- unselfish to his diminutive core, he always thought pass first. He had a career assists-to-turnover ratio of 3-to-1 and is still the 76ers' all-time assists leader (6,212) and steals leader (1,942).

A part of the 1983 Philadelphia squad that included "Celtic Killer" Andrew Toney, Julius Erving and MVP Moses Malone, Cheeks was always in control, distributing the ball. Philly ripped through the '83 playoffs with a 12-1 record, sweeping the defending champion Lakers in the Finals, where Cheeks contributed 15 points and six assists per game.

He shot 52 percent for his career and was selected to the NBA Defensive first team for four consecutive years (1983 to '86). A 15-year vet, Cheeks -- as with other non-sensational but durable Hall of Famers like Harry Gallatin and Jack Twyman -- played well enough and long enough to deserve Hall of Fame inclusion.

Honorable mentions
Besides this quintet, there are others who are Hall worthy. Mark Aguirre deserves a look, as do Paul Silas and Richie Guerin. You have to dig deeper to find them and others. But the digging is required if we are to have more than a Hall of Variety, in which coaches of all stripes, women, international players and broadcasters are passed through ahead of the greats of the NBA and ABA.

Ken Shouler is the editor of and a writer for "Total Basketball: The Ultimate Basketball Encyclopedia." To e-mail him, click here.