Editor's note: This article originally appeared on Feb. 12, shortly after Reggie Miller revealed he would be retiring after the season.

The Reggie Miller everyone knows goes on the David Letterman Show after perhaps the most phenomenal playoff sequence in NBA history -- when he scored eight points in 8.9 seconds to steal a playoff game from the New York Knicks -- and showed everyone the choke sign.

The Reggie Miller that Richard Craig knows was the only driver who would heed his anguished cries on an Indianapolis interstate to help his stricken mother and save her life. 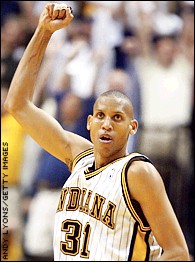 The Reggie Miller everyone knows mugs with Spike Lee and so frustrated John Starks he attempted to strangle Miller. He even drove Michael Jordan to perhaps his weakest moment as a pro when he raked his fingernails across Miller's face in an apparent attempt to disfigure him.

The Reggie Miller they know at the Indianapolis schools he visits calls the principal and asks if he can come in to sign autographs for the kids and counsel them. At the local hospitals, they know Miller for his frequent unannounced visits, especially for the fire and burn victims for whom he also has helped raise tens of thousands of dollars.

The Reggie Miller we know once spit into the crowd, has bowed to all four sides of a visiting arena after a game winning shots, got up loudly cursing Shaquille O'Neal after a collision and dared O'Neal to hit him harder.

The Reggie Miller that Cheryl Miller knows couldn't walk correctly as a kid, wearing braces on his legs for five years for pronated hips while he patiently watched his athletic siblings, basketball star Cheryl and baseball star Darrell, play in the backyard.

The Reggie Miller we know is all bluster and confidence, unafraid to take the final shot, willing to talk bigger than anyone's game.

The Reggie Miller rookie second round pick Fred Hoiberg knew was the guy who promised to come to Hoiberg's summer camp in Iowa, found himself with a conflict, so he chartered a plane to be with the bench guy who never played because, well, he promised.

The Reggie Miller his coaches knew was the kid born to a military man who was all "yes, sir" and "no, sir" and who never questioned the coach no matter the circumstances. That Reggie Miller heard Larry Brown berate him, as Brown did all his big stars, like David Robinson, Allen Iverson and Danny Manning, and respond that "if Larry says it's so, it's so."

Word of Miller's retirement from the NBA, which pretty much had been assumed since the summer when teammates were saying Reggie told them this was his last go 'round, came out this week from Cheryl. Reggie will leave after his 18th season, probably without that elusive championship ring in this cursed mess of a Pacers season riddled with suspensions and injuries.

He'll leave the NBA as the league's most prolific three-point shooter, with an Olympic gold medal and World Championship gold, with five All Star appearances and a substantially higher scoring average in the playoffs than in the regular season, one of the best pressure players ever in the NBA. Or, as Pacers' president Donnie Walsh likes to say, "The most unappreciated star ever."

Look, Reggie Miller, like most athletes, people actually, is no saint.

Don't pray to him. But we can be thankful for having had him in the NBA.

Reggie made it interesting and fun.

He always understood it was sports and entertainment.

He figured out quickly that all good plays need a villain.

"I love being the villain," he once told me. "You've got to remember the NBA is the entertainment business, like Billy Joel or Michael Jackson. When we take the floor, we have to perform, entertain people. And I love being booed. It really gets me going. The bad guys are supposed to wear black. That's OK. I'll be the bad guy."

Miller really needed to be the bad guy.

He's 6-7 but about 180 pounds. He could pose for the NBA bully at the beach ad with Karl Malone, whose retirement also became public this week. Miller is just so skinny, those 180 pounds seemingly pasted to his body. But he always played. Five of his first six seasons, he didn't miss a game. In his next nine seasons, he missed a total of 15 games. No disrespect to Malone, who played through everything but bones sticking through his skin, but Miller could fit inside Malone's left leg.

Try running off, or bouncing off those screens like he did. Try the constant motion, and then being the target of the late hits. After all, who else was getting the ball for the game winning shot? Sure, Miller missed plenty, as all the great ones have, but he's hit some of the most famous.

There was the one over Michael Jordan in the 1998 conference finals, the irony being that Jordan claimed Miller pushed off. Perhaps Jordan learned that one from Miller for his shot in Game 6 against the Jazz. That funky 40-footer to send the playoff game with the Nets into overtime in 2002 and then win the game on a driving dunk. Back-to-back 40-point games in the 2000 playoffs to help the Pacers to his only Finals, a 25-point fourth quarter to beat the Knicks -- always, it seemed, the Knicks -- in the 1994 conference finals, averaging 31 points in the clinching games of each series to get to the 2000 Finals and then 29.5 points in the last four games of the series. 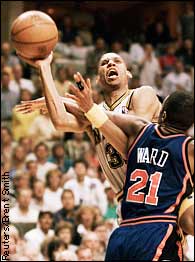 He was sort of his era's young Cassius Clay, running his mouth, talking and talking and -- as many believed about the former Clay when he won the title from Sonny Liston -- Miller had to talk, to yell, to proclaim to channel the fear.

Reggie Miller wasn't supposed to be a star. They booed in Indianapolis on draft day when they took him over Steve Alford. He was "Hollywood" Reggie, from UCLA and with the 'tude, the bad boy, the kid who'd spit in the stands, enraged everyone.

When he went back to Los Angeles for the opening of the 2000 Finals, he admitted he didn't have many friends there, that most were in Indianapolis, where he is most comfortable and lives.

He had a chance to return to Los Angeles and join the championship run of the Lakers, but he opted to rebuild with the Pacers. They broke up their Finals team, let Reggie's best-ever NBA friend, Mark Jackson, go, but Reggie said it was his duty to help the Pacers make it back. He tutored all the high school kids they brought in: Jermaine O'Neal, Al Harrington and Jonathan Bender. He is renowned for his work ethic, shooting hours early, working out long after most have left. If Reggie could do it approaching 40, well then they had to.

But the end was coming. The Pacers brought in Stephen Jackson as Miller's successor, and there were whispers the team hoped Miller would volunteer to come off the bench this season. It became a moot point with all the suspensions, and Miller had to play even more. When he returned from injury just after the suspensions, he averaged 19.8 points in his first 10 games, with two 30-point games to help keep the Pacers' season afloat. By the end of the season, he should pass Patrick Ewing for 13th on the all-time NBA scoring list (and perhaps even Jerry West, for 12th place) and also rank in the league's all-time top 10 in free throw shooting, three pointers made, games and minutes played. On the way to the Basketball Hall of Fame.

Which is the Reggie Miller we hardly realized we've been watching all these years.

Sam Smith, who covers the NBA for the Chicago Tribune, is a regular contributor to ESPN.com.