He watched several participants with Spurs ties, including All-Star forward Tim Duncan and coach Gregg Popovich for USA; Manu Ginobili and Luis Scola for gold-medal winning Argentina; center Robertas Javtokas of Lithuania; and center Sean Marks of New Zealand. They are ties that will make Spurs basketball strong for many seasons to come. 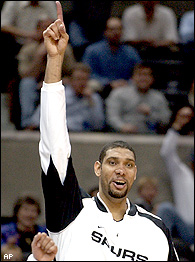 "(Watching) was very difficult,'' said Buford, who was home in Texas. "You're always with the U.S. But there is an excitement for the success that Manu has obtained and to see Scola playing well. We had a vision and a plan, and it supports what we're hoping to see happen.''

Considering how important they are to their franchise, Buford definitely had a keen eye on Duncan and Ginobili. An argument could be made that those two Spurs were the two best players in the Olympics. But in order to be at their best, both had to play major minutes just a little more than a month before the beginning of training camp.

Ginobili averaged 19.3 points, shot 40.5 percent from 3-point range and had 1.37 steals per game. But the slender and slashing 6-foot-6, 205-pounder also played a team-high 29.8 minutes over eight games and endured one hard foul during the gold medal contest against Italy that made Buford cringe. Even so, Buford is confident that Ginobili will be ready to go once camp begins.

As for Duncan, the minutes could have been a lot worse. The two-time NBA MVP was limited to 25.8 per game due to foul trouble. Had he not been in foul trouble, Duncan probably could have averaged about 10 more minutes and could have a gold medal hanging around his neck. But he also could have experienced a lot more wear and tear coming into Spurs training camp.

"It's a concern,'' said Buford, about playing time Ginobili and Duncan had in the Olympics. "Unfortunately, Tim played in foul trouble throughout the Olympics, which probably limited a lot of his minutes. I talked to Manu (Monday). He's healthy as we sit here right now. So hopefully, that will translate (when camp begins). It's important that he gets his rest. (From international competitions the past two summers), he's been less healthy than he is now. So hopefully, he'll get his rest and be ready to go.''

When asked if Ginobili and Duncan will have it light at the beginning of camp, Buford said: "That will be Pop's decision. It's never been his M.O. to wear guys out. One of his strengths is understanding how to work that roster. I don't envision that being a difficult issue. A lot of it is based on feedback you get from them. So until camp starts, I'm not sure what that answer is.''

While Popovich obviously didn't play, he was part of one of the hardest and most scrutinized coaching jobs in sports history. Often after games, it was Pop who answered for USA's shortcomings. While Popovich's assistant coaching position was an extreme challenge and mentally draining, Buford expects him to be rejuvenated by the time camp starts.

"I visited with him a little bit in the gym (Monday),'' Buford said. "This is the most stable man you've ever seen. He's doing great. He's ready and excited to see what he can do with our team. He's going to get (rest). He knows what he needs.''

The Spurs had one of the NBA's better offseasons. Ginobili was re-signed to a six-year, $52 million contract. San Antonio got the most bang for its buck in landing Seattle guard Brent Barry with a four-year, $22 million deal. Forwards Bruce Bowen and Robert Horry and Marks were re-signed, a veteran bruiser in forward-center Tony Massenburg was signed, and they drafted another solid international prospect in Slovenian guard Beno Udrih.

And with this group, the Spurs will be in contention to get back to the NBA Finals.

"I like the stability we have with our roster for the first time in a while,'' Buford said. "It's more stable than it has been in the past. When you're as much as a system-oriented team as we are, that makes our starts slower than our finishes. Maybe we will be able to pick up where we left off and be in a lot better position.''

This Spurs would be even better if Scola and Javtokas, who both speak fluent English, were on the roster now.

Scola, 24, was drafted with the 56th overall pick, third to last, in the 2002 NBA Draft. At a reported 6-9, the undersized Spain Tau Ceramica star is often taken for granted. But that changes during games as was the case in the Olympics. Scola averaged 17.6 points on a stunning 65.5 percent field-goal shooting and a team-best 5.1 rebounds in 25.2 minutes. Scola is under contract this season in Spain, but Buford is hopeful that he could be a Spur during the 2005-06 season.

"He wouldn't be our starting forward (now), but we have a pretty good starting forward (Duncan),'' Buford said. "He's definitely a contributor. People that have evaluated him have spent too much time worrying about his limitations and not appreciating what he does bring to a team. He's a little bit undersized. He's not the world's greatest athlete. But he knows how to play and he gets things done.''

Seeing the 6-10 Javtokas sprint down the floor and flying for dunks was quite remarkable considering a motorcycle accident he was involved in on May 1, 2002.

Javtokas' motorcycle hit a van in Lithuania, and after he lost control and ran into a car in the opposite lane, he flew off the road into bushes. Javtokas, 24, recovered from the life-threatening crash to get back on the court after several surgeries in which plates and rods were put in his legs. After nearly a year and a half off court, he made Lithuania's national team and finished the Olympics with serious time in the medal round.

While Javtokas could be a backup center with the Spurs now, he is under contract with Lithuania Lietuvos Rytas through next season. Buford believes that
Javtokas is a little shy of reaching the athleticism he had before the crash, and he would probably be an NBA player now if it never occurred.

"It's remarkable that Robertas is able to play at all, and he was a contributor on the Olympic team,'' Buford said. "He wasn't even invited to (Lithuania's) trials a year ago and to now be a fairly decent fixture in their rotation is a medical miracle in itself."

The gritty sharpshooter got strong attention after hitting clutch 3-pointers and a four-point play in an upset win against USA in Olympic preliminary action. The Spurs actually tried and fell short of getting him from Israel Maccabi Elite Tel Aviv before last season, and Buford definitely believes Jasikevicius is capable of being an NBA player.

At some point, Buford wouldn't mind adding him in the future to an international Spurs roster that includes Duncan (originally from Virgin Islands), guard Tony Parker (France), center Rasho Nesterovic (Slovenia), Ginobili, Scola, Udrih Javtokas and Marks. And it's that international formula that will keep the Spurs as an NBA championship contending team for many, many years.

Marc J. Spears, who covers the NBA for The Denver Post, is a contributor to ESPN.com.