Vin Baker has spent the past two days in Miami meeting with Heat officials and is expected to visit Monday with the New York Knicks, ESPN.com has learned.

Baker, released by the Boston Celtics earlier this month, is being pursued by a clutch of Eastern Conference clubs that also includes Toronto, Philadelphia and Detroit. Sources told ESPN.com that Heat president Pat Riley is optimistic about beating out the competition for Baker.

Baker's agent, Aaron Goodwin, refused to discuss specific teams but said the veteran power forward hopes to have a new club "by Tuesday at the latest."

With $36 million left on his contract, Baker was released by the Celtics after he missed his 10th consecutive game. He missed those matchups while suspended, after failing to adhere to the guidelines of his alcohol rehabilitation program.

The NBA Players Association has since filed a grievance on Baker's behalf and will attempt to convince an independent arbitrator that the Celtics could not terminate the contract on the premise that Baker is unfit to play. To support its argument, the union points to the number of teams trying to sign Baker since he cleared waivers.

"We've made a decision that he can sign with another team without interfering with the grievance," Goodwin said. "Vin is absolutely fit to play."

The grievance is expected to be heard within the next month.

Lawrence Frank has done some great things with the Nets. Especially when you consider that some real coaching heavyweights -- Dick Motta, Cotton Fitzsimmons and our own Dr. Jack Ramsay -- never experienced a 13-game winning streak ... and each of those guys won more than 800 games in this league.

But the little guy in Jersey hasn't fixed everything.

New Jersey has the worst record in the league against the 14 teams in the NBA with a winning record as of Friday morning. During the regular season, such statistics don't mean everything, but the numbers below aren't especially encouraging:

P.S. If it makes the Nets feel any better, since Dec. 4, the Lakers are 3-11 against teams with winning records.

Look for Van Horn to flourish in his Bucks stop
Can't say I subscribe fully to the One Too Many Trades theory circulating about the Knicks since they moved Keith Van Horn. 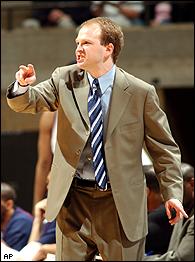 But I do like Isiah Thomas' most recent deal a lot better for Milwaukee than New York.

Tim Thomas ranks as perhaps the least productive max-contract player in league history, and it's hard to imagine the Gotham pressure-cooker bringing out his best. You'll note that Zeke said several times he wouldn't have made this swap if he wasn't also getting Nazr Mohammed from Atlanta in the three-team exchange.

Keith Van Horn, meanwhile, is now on his fourth team in the past two years, but he's finally in a small market. The pressure on him will thus be substantially lessened with the Bucks, who are thrilled to get Van Horn because there's no guarantee -- even when Milwaukee finally does create some cap room down the road -- that they would be able to lure a premium free agent.

What initially seemed like trepidation on Van Horn's part to join the Bucks was actually hesitation from his wife. It wasn't an anti-Milwaukee sentiment -- it was merely the shock stemming from yet another trade, with news of this deal coming to the Van Horns while they were celebrating their daughter's fourth birthday at Disney World.

Briefly ...
Good to know the important people are reading: The league and union's joint decision to lengthen the All-Star break by at least one day, instead of allowing veterans to report late to training camp, is something we proposed ages ago. The All-Star break should actually be lengthened by at least two days, to give the contestants the time off they deserve, but it's a good start. If you allow us to be greedy, we'd like to see players have Monday through Wednesday off after the All-Star Game -- factoring in some cushion for travel time -- and then more pressure from the league and the union on the real All-Stars to participate in the Saturday events like the NHL's All-Stars do. ... Cedric Ceballos fans will be pleased to know that our man Ced is still playing for the Harlem Globetrotters in addition to his broadcast work in Phoenix. Ceballos recently played against former boss Mark Cuban, who was making a cameo in Dallas for the New York Nationals. ... Tracy McGrady thinks the original pass to himself off the backboard for a dunk in the All-Star Game (in Philadelphia in 2002) was better than the same move he pulled off in the L.A. edition of the midseason showcase. "The first one was definitely better," T-Mac says, citing more traffic. ... So where did John Amaechi end up after being exiled from Utah, Houston and New York in succession? At 33, the outspoken center is playing for the Manchester Magic of the English Basketball League. That's Amaechi's hometown team in England's semipro league, not even its best league. ... Feather-in-cap kudos go to Cleveland general manager Jim Paxson, who quietly signed Carlos Boozer to a three-year contract when the power forward from Duke slipped into the second round of 2002 draft. As a result, Cleveland doesn't have to sweat losing Boozer like Golden State did with Gilbert Arenas, and like San Antonio and Detroit are sweating now with Manu Ginobili and Mehmet Okur, respectively. Because Ginobili and Okur originally signed two-year deals, their teams are limited in the amount they can raise those players' salaries unless they are under the salary cap. Which is why the Spurs and Pistons have been maneuvering so frantically to be well under. ... Sacramento's Vlade Divac, on his recent flurry of games with double-digit dimes: "I can't jump, but I can assist."

Marc Stein is the senior NBA writer for ESPN.com. To e-mail him, click here