1. A six-game stretch in which he hoisted 17 three-pointers and missed them all.

2. His old team racking up the W's as frequently as his new team.

Barry, furthermore, can only explain one of those developments ... and it's not the first one.

"I'm not surprised that they're winning ballgames -- only the rate at which they're winning," Barry said of the Seattle SuperSonics, who bring their stunning (to most of us) 15-3 record into the SBC Center on Wednesday night for a showdown with the 16-3 Spurs. 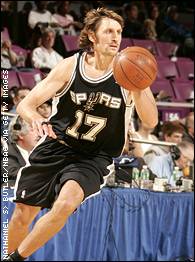 "I think there's a major difference this year. They have guys that will clean up on the glass, and that's one thing that's really been missing the last couple years. Whenever you have a good shooting team, you need to have as many bullets in your gun as you can."

Perhaps it's time to start calling them the Seattle Bullets. The Supes continue to shoot the ball at a ridiculous clip -- 45.1 percent, good for ninth in the league and glorious for a perimeter-based offense -- but it's not that success rate or even their league-leading percentage from three-point range (.396) that has triggered such a quality start.

The key? Seattle ranks fourth in the league in rebound margin -- 2.8 per game. Last season, before the arrival of Danny Fortson and with Nick Collison missing all 82 games through injury, Seattle ranked 26th at minus-3.4 rebounds per game. Fortson, Collison and Reggie Evans are an undersized but effective triumvirate. So far.

"If you have six or seven more possessions a game, and three of those possessions you're making three-point shots, that's nine extra points every night," Barry said. "People don't realize how significant that is."

Because of the Sonics' success, carrying their good start into December after starts of 6-2 and 8-2 the past two seasons flamed out, people are starting to figure it out.

Barry, meanwhile, is hoping that Sonics' arrival can spark him into the start of a recovery from a rough opening month in San Antonio. Widely billed as one of the most influential free-agent acquisitions in the league, the 10-year vet followed a perfect night against Dallas on Nov. 24 (12 points on 4-for-4 shooting) with an 0-for-17 showing on threes in the next six games.

The best explanation Barry can offer is that he's trying too hard to justify his four-year, $20 million contract. This sort of slump is an unusual problem for a guy who finished second in the league in three-point shooting in 2003-04 at 45.2 percent, so, while adjusting to a new defense-first system and playing without the ball in his hands are factors, settling on the main culprit isn't simple.

"Oh, it's been brutal," said Barry, who's shooting 40 percent overall, including just 30 percent on threes, and averaging 7.5 points in 22.7 minutes.

"It's been fun to win, but I just haven't found my rhythm yet. I'm hoping in the next couple of games and next couple of weeks that I'll be able to work myself out of it. I'm just trying to be patient with myself. I'm really disappointed in the way I've started off, but not to the point where I'm going to give up on things. It just makes it easier sleeping at night -- my wife's making me sleep on the couch until I start shooting the ball better."