It might just be another New Year's resolution I can't keep. Even so, it feels right.

Easing up a tad on Kobe Bryant, that is.

He scored 27 points in the Lakers' 111-104 victory over the Houston Rockets on Friday night, a game in which Bryant and the Rockets' Tracy McGrady, who scored 26, both pledged $1,000 per point to the tsunami relief efforts in south Asia.


If Kobe Bryant is going to try this hard to win back some public in 2005, the public and its press-row watchdogs can try to be not quite so eager to crack on him.

Odom means all of us. He, too, has noticed what strikes us here at Stein Line HQ as one of the stranger quirks in recent memory.

Facing life in prison, but playing as well as he ever did, Kobe was hailed a hero by many. Seemingly at his most spectacular on the game days he jetted to and from Colorado, making the phrase court-to-court standard NBA parlance, he wowed us. I've said it before and I'll say it again: I've never seen a Laker showered with more adulation than the Staples Center love Kobe bathed in last season, when the place housed four cornerstones -- future Hall of Famers all -- and maybe the greatest coach of all time.

Now Kobe is a villain. Kobe is no longer facing charges of felony sexual assault, but because Phil Jackson is in field-and-stream exile, and because Shaquille O'Neal is in Miami, now comes Nike's reluctance to promote his new shoe, the flood of stories about Bryant's sagging jersey sales and opinions like that of our own Jason Whitlock, who recently suggested to Bryant on Page 2 that "it seems as if the whole world has turned against you."

It's a funny old world, sports.

Even faster than expected, not even halfway into his first season as a solo act, Bryant has discovered that losing games is the force that can really make an icon lose fans. A force helped along by the theory that he drove away the other icons who could help him win the most.

There is thus little mystery why Kobe has been so increasingly accessible lately. We all know that the recent Karl Malone-Vanessa Bryant controversy, and a Christmas Day encounter with old pal Shaquille O'Neal, were huge factors in driving Bryant, after months of silence, to finally sit down for a series of televised interviews. As one L.A. wag also notes, Bryant's media blitz also commenced around the same time it became clear to him that the new Lakers would have to consider themselves fortunate to finish sixth in the Western Conference.

Of course, if Bryant wasn't going to be unnerved by those court-to-court jaunts and the worldwide scrutiny he faced in 2003-04, you're not going to see him snapping in public now, no matter how far the Lakers have fallen. He looks pretty peaceful for a guy who has more injuries (thumb, shoulder, foot) than teammates who can help him in the fourth quarter. He's also playing pretty well, shooting percentage aside, for someone who has never been hounded by opposing defenses as much as he is today.

"Other people may look at it and say, 'He must feel a lot of pressure,' " Bryant told ESPN.com on Wednesday. "But from the inside, I don't feel that. As a team, we're starting at the bottom trying to work our way back up to the top. We all knew it was going to be hard. But I feel very relaxed. I feel very confident in our core. I don't feel that type of pressure."

The inevitable reaction, as repeatedly uttered in the wake of his pre-Christmas press junket, is that No. 8 is merely telling us what he thinks we want to hear. Stein Line favorite Mark Heisler of the Los Angeles Times, for example, recently dubbed him Kobe Bean I Fell From Grace Bryant, because of all the fall-from-grace questions Bryant gets these days. Even Kobe himself will admit that his image needs polish.

But the calendar has flipped. Perhaps it's time to be a bit more forgiving. And it's also time to acknowledge that Bryant is, at last, letting some realism seep into his famed I Can Do Anything mentality.

From here, the most telling comment Bryant offered in last month's visits with the PTI guys and the NBA Shootaround crew was his admission that the Lakers are "a ways away" from getting back to the elite. That had to be a very painful admission for an uber-competitor like Kobe.

Cornered on Wednesday in Dallas, Bryant expounded on the lowered expectations he has been forced to embrace.

"We want to win and win right now," he said. "But you know what? It's a challenge, and we all love challenges. Hopefully we're lucky enough to get back up to that top. And then you can appreciate it that much more. I was fortunate when I came into the league to come into a winning situation. We won three titles. I'm motivated to fight to the ends of the Earth to help us win another one."

He admits to hearing "people in the stands talk about how terrible we look" and "reporters saying we're not going to make the playoffs" and draws motivation from those sources, too. He's also eager to shoot down myths as quickly as you can present them to him.

Asked if he'll ever be able to lure a top free agent to Lakerland -- someone, say, at the Yao Ming level -- Bryant announces that "I get calls all the time from players who want to come down and play for the Lakers."

He also hits back at the detractors who question his ability to make teammates better, laughing deeply and saying: "How many times do I have to do that? We won three championships and people act like Shaq won those championships by himself, (like) he was the only player out there making teammates better. It's really silly. We tag-teamed it. (Ex-Lakers assistant coach Tex Winter) turned me into a playmaker and a facilitator. To hear people still talking about whether I can make teammates better, I just use it as motivation."

Kobe will always be guilty of not announcing to the masses that he wanted Shaq and Phil to stay, because his refusal to do so leaves the inescapable impression that Bryant told the Lakers he wouldn't re-sign unless both were gone. Yet it will also always be true that Lakers owner Jerry Buss was no less a factor in the dismantling of the NBA's glamour franchise, and maybe even the bigger factor.

Buss did not want to pay Jackson the eight-figure salary he was demanding. And he certainly had no interest in signing O'Neal to a contract extension worth more than $30 million a season, starting when he's 34 years old.

"I don't care if Shaq was Kobe's best friend," said one Lakers insider. "For the money Shaq wanted, there was no way we were bringing him back."

Doesn't matter whether there's a Kobe entry on your list of resolutions. Either way, the rational among us will realize that you can't fault him for everything. 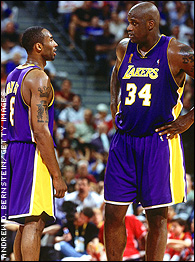 You can't blame him for not getting Odom more touches in the low post -- a move that would help Bryant's game as much as anything -- because that's Rudy Tomjanovich's failing. Nor can you blame Bryant for his heavy playing-time load; again, it's a Rudy call that he's playing so much (43.3 minutes per game) in spite of plantar fasciitis and the other ailments that may end the Lakers' season prematurely.

You likewise can't rap Bryant for taking so long to open himself up a bit when you remember just how much trouble has loomed over him since that fateful trip to Eagle in late June of 2003. Who wouldn't head for a cocoon after that?

He's slowly inching out of the cocoon and I, for one, am going to try to be more welcoming. You know. Give him the floor to keep scoring second-chance points.

"In light of all the stuff people talk about, how I can't lead a team to a championship, that there's no way he can ever win one (without Shaq), it would feel great just to shut everybody up," Bryant said. "But I understand it's a process for us. You can't skip steps. We all have to be patient and grow with the process and use everything as fuel."

"I think everybody is moving on," he said. "If you wanted to talk about this two weeks ago, I can understand, but now we're moving on. I've moved on. It's a new year."

Said Odom: "He's human. He's 26 years old, and he's so good that everybody wants to know what's going on with him in his life. To whom a lot is given, a lot is asked of. But he's been through a lot. He's a good dude, in my opinion. And he's definitely one of the strongest people mentally that I've ever been around. I think everybody here kind of looks up to him for that. He's the man."