Bill Davidson told a local television station Wednesday night that the owner of the Detroit Pistons can't allow himself to employ a coach who's "not a good person." 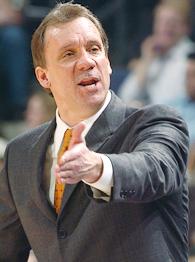 He's a braver sort than anyone knew.

Detroiters are bound to worry about Flip Saunders succeeding Larry Brown. They're sure to question how a coach who got Minnesota out of the first round of the playoffs exactly once in a decade can really replace the legend who made the Pistons champions again.

Detroiters, though, have to respect the new guy already, before Flip runs a single practice and no matter how much they might be sweating Larry's latest combustible exit.

They have to respect this: Saunders is willingly stepping into the toughest coaching situation he could find.

He's inheriting a championship contender, true, and the pay is nice: $20 million guaranteed over four years, plus incentives. Yet you can't dare to suggest that this was the easy option. Taking the Pistons' job was hardly a no-brainer.

It's the antithesis of easy, actually. The Pistons will be asking Saunders to do no worse than get this team back to the NBA Finals in his debut season  and to finally start developing Darko Milicic in the process  and to do it all in the face of daily comparisons to how magical Brown's touch was.

Knowing all that, Saunders wanted the opportunity anyway.

Recent history sets the bar ultra-high, after Brown -- for all the drama he always drags into the job -- came within one victory of back-to-back championships.

Modern history, meanwhile, raises it even higher, with Flip forced to follow one of just six coaches in the past two decades to actually win it all in the NBA.

Brown is No. 6 on a list that features Pat Riley (four titles), Chuck Daly (two), Phil Jackson (nine), Rudy Tomjanovich (two) and Gregg Popovich (three). Tomjanovich is the only member of that group who might not be remembered as a strategic mastermind, but his ability to motivate and connect with players was indeed Hall of Fame-caliber.

Can Saunders live up to all that? If you believe that coaching matchups are just as important in the big games as the player matchups, you can understand the skepticism. No one ever doubted Larry matching Xs and Os with Phil or Pop. Flip will have to prove he can coach at that level.

Yet you can also nix the assumption that Saunders is intimidated by any of this, because he didn't need this job. He had other offers. He also would have earned $5.5 million from Minnesota next season had he elected not to coach.

Saunders ignored all that and took Detroit's offer because he wanted all the challenges, along with the rare opportunity to join a better team than the one he left in Minnesota as opposed to going sideways or backward.

But let's be clear here. The Milwaukee Bucks were Saunders' easy option. His friend Larry Harris, Milwaukee's general manager, offered Flip an equally lucrative deal in the $20 million range to take over a team with comparatively modest expectations after a 30-52 nightmare. Getting the Bucks to 40 wins or even 50 wins isn't nearly as daunting as trying to improve on what Brown did in Detroit.

And Milwaukee's situation is even more attractive now than it was when Saunders ultimately declined, with the Bucks spending liberally to surround No. 1 overall pick

Saunders decided instead to take a job where success and failure are judged solely on how you fare in the NBA Finals. This ain't Minnesota, Toto, where the Wolves were playoff underdogs almost every year and first-round exits were easily rationalized.

Friends insist he's not worried, though. Saunders obviously believes in his ability to connect with a loyal-to-Larry group that, even after months of Larry's Leaving Us chatter, still played ferociously for Brown, all the way to the end of their two years together.

Flip figures, furthermore, that he's getting a group far hungrier than the 2004-05 Pistons, who as defending champs struggled with intensity issues for much of the regular season. In '05-06, Saunders is betting that the Pistons' proud vets -- always looking to fuel themselves with the slightest diss -- will want to show the world that they can win without the coach Rasheed Wallace calls Pound For Pound. 'Sheed says it is simply a reference to Brown's initials, LB, but it has also come to be known as a way of saying best coach in the world, pound for pound.

Hold the panic, Detroit. Saunders is no slouch. He has more wins before the age of 50 than Brown or Jackson. His winning percentage, after 10 NBA seasons, is almost identical to Brown's first 10 NBA seasons: .558 to Brown's .559.

Rival coaches and scouts have always lauded Saunders' offensive creativity. Brown is far more defensive-minded, but you can argue that these Pistons no longer need so much coaching at that end. If Saunders' thick playbook spruces up the offense as Pistons insiders expect, without any discernible drop-off on defense, they might end up being even more dangerous than they were.

If there's a grave concern, it's more Saunders' reputation for avoiding confrontation as opposed to anything tactical. His approach worked for years with the Wolves, largely because Saunders had a dominant superstar policing the locker room. Things unraveled spectacularly last season when the deepest Wolves team of all-time, with more headstrong personalities than Kevin Garnett could help the coach control, got Flip fired a little more than halfway through the season.

Detroit's roster, of course, is not without depth or headstrong personalities. Saunders has a good history with ex-Wolves guard Chauncey Billups, but he still has to prove he can reach 'Sheed as Brown did.

It should be noted, though, that Saunders has a much more involved boss in Detroit, after he gradually drifted apart from the Wolves' Kevin McHale. Pistons president Joe Dumars is coming off two long seasons of refereeing Brown's funks and what they can do in the locker room. Helping Saunders build a chemistry with the Detroit vets won't be any easier.

"I think finally we're where we want to be."

Ditto for Flip. You have to respect the fact he wanted to sit on the furthest bench from comfortable.