Imagine a free-agent universe where a slew of big-name vets become available in late July because their contracts are too expensive for their current teams to keep. 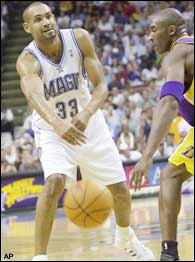 Imagine a marketplace that suddenly offers up, say, the stately Grant Hill at a starting salary of no higher than $5 million.

Imagine a former All-Star like Eddie Jones in the same price range. Or a scorer in the Jalen Rose class.

You pretty much have to imagine all that, since roughly none of it will end up happening that way.

When word initially spread about the much-ballyhooed "amnesty" clause in the new labor agreement -- a clause that quickly became known as the Allan Houston Rule -- it wasn't fans alone salivating over such possibilities.

The one-time opportunity all teams will have to waive a player without paying any luxury tax on the player's guaranteed contract had front offices buzzing for a while, too.

The widespread first impression in circulation made the Hill, Jones, Rose and Webber scenarios seem plausible. Virtually every famous name in the league possessing an unwieldy contract has been mentioned as a possible amnesty candidate ... to the delight of capped-out contenders hoping to pounce on those vets at bargain prices.

No one foresees a bonanza any longer, though. Curiosity has been replaced by the reality that most teams aren't eager to waive productive players -- while continuing to pay their salaries in full -- in exchange for mere tax relief.

We repeat: No cap space is gained by waiving an amnesty player.

Conversations with numerous personnel folks around the league over the past month suggest that not even half of the NBA's 30 teams plan to make an amnesty move.

And all indications are that there's less-than-little chance that Hill, Rose, Jones, Webber or even Portland Trail Blazers shot-blocker Theo Ratliff would be set free by their current employers.

The Dallas Mavericks' Michael Finley is the only All-Star alumnus who's likely to be released while still anywhere close to his All-Star self.

The New York Knicks' plans to waive Allan Houston have become synonymous with the rule, obviously, and the Los Angeles Lakers' Brian Grant is another reasonably big name who's sure to be released. Knee problems, though, mean that neither is still regarded as a certain difference-maker.

Finley, then, stands to be the only impact player available. Portland's Derek Anderson and Indiana's Austin Croshere are among the more prominent maybes, but neither is on par with Finley. The 32-year-old's scoring average has declined for six straight seasons, and his salary for 2005-06 is nearly $16 million, but Finley did uncork a 31-point playoff game at Phoenix in the second round.

"Remember that a lot of the guys you're talking about are still good players," said one Western Conference executive. "At some point -- probably at the end of their contracts -- they're going to be tradable. Every contract at some point becomes tradable. Teams aren't just going to get rid of good players if they're not getting any cap relief." 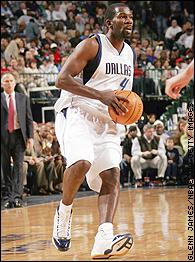 Said another Western Conference executive: "The rule really only helps teams that are close or above the luxury-tax threshold, which will probably be around $61 million [next season]. "If a team doesn't look like it will be close [to the threshold] over the life of its worst contract, they won't use [the amnesty provision]."

Thus the rule appeals mostly to the teams with the fattest payrolls and biggest luxury-tax bills, such as New York and Dallas. The potential tax savings -- more than $50 million in Finley's case -- virtually forces Mavericks owner Mark Cuban to release his former face of the franchise unless Dallas can concoct a trade first, as it still hopes.

The scariest part for the Mavericks is that -- beyond the fact he'll receive all of the $52 million left on his contract -- Finley would then be able to go to a Dallas rival such as Phoenix or San Antonio for as little as a veteran minimum contract in the $1 million range. If he's inclined to hold out for the best financial offer -- a multi-year deal starting at the full mid-level of $5 million or so -- Finley will weigh offers from at least two up-and-comers: Denver and his hometown Chicago Bulls.

The outlook is far different with most of the other high-profile cases who were once thought to be at risk, again because there is no cap relief for the teams who do the releasing.

The Heat, for example, are too close to a title to dump Jones and get nothing back for him, especially with just two years (at $30 million) remaining on his contract. If it made Jones an amnesty casualty, Miami would still be well over the cap and unable to land a quality replacement.

Rose also has just two years left on his deal -- at $32 million total -- but the Raptors have two high-salaried players still on their books (Alvin Williams and the since-released Alonzo Mourning) who are far less productive than Rose. The same goes for Boston and Raef LaFrentz (four years and $47 million left); Mark Blount struggled far more than LaFrentz last season to justify his salary ($33 million over five years).

The Magic, meanwhile, have come too far with Hill to oust him now, just when it appears -- as an All-Star reborn -- that he's sturdy enough to make a huge difference with a contender somewhere.

For all the concern about his mobility, cutting Webber holds little appeal to the Sixers. He had less than half a season alongside Allen Iverson, and Philadelphia just fired Jim O'Brien to bring Mo Cheeks back to town. Philly understandably wants to give the Iverson-Webber partnership more time to click under a new coach ... especially since the Sixers would still be required to pay the $62 million over the three seasons that remain on Webber's contract.

"The Lakers would love that," said one Webber confidante. "But it's not going to happen. Trust me."

No matter what you might have heard or wished for.