The team that won the Michael Finley Sweepstakes is the same team that just won an NBA championship.

Finley told ESPN.com on Wednesday that he has chosen to sign with the San Antonio Spurs, spurning a richer offer from the Miami Heat and the lure of an emotional return to the Phoenix Suns to reunite with close friend Steve Nash. 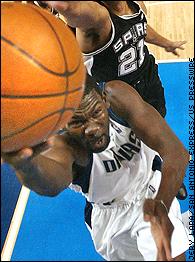 The Dallas Mavericks tried for weeks to move Finley to an Eastern Conference team to prevent him from joining the Spurs or the Suns. When it couldn't swing a trade before the Aug. 15 deadline to exercise the NBA's new amnesty clause, Dallas reluctantly waived the two-time All-Star, making Finley an unrestricted free agent and the target of an intense two-week courtship that also involved the Detroit Pistons and Minnesota Timberwolves.

Miami's Pat Riley, Phoenix's Amare Stoudemire and Minnesota's Kevin Garnett were among the big names to fly to Chicago last week to make face-to-face pitches to Finley. In the end, he went with the team that sent a one-man delegation -- Spurs coach Gregg Popovich -- to Finley's hometown.

The complete structure of the deal with San Antonio hasn't been finalized, including the length of the contract, but Finley will receive a starting salary of roughly $2.5 million this season.

"To be a part of a championship team, I'm excited," Finley said. "This is the closest I've ever been to a championship. I'm looking forward to the challenge of helping this team repeat."

Asked why he picked the Spurs, Finley said: "In a nutshell, they're already a championship team but they have room for improvement. And I feel my game can help them in the areas where they need improvement."

Landing Finley, 32, completes an impressive summer haul for the Spurs, who felt a need to be as aggressive as they've ever been in free agency after struggling to holds leads of 2-0 and 3-2 over Detroit in a taut-as-possible NBA Finals. They expect Finley to supply off-the-bench punch and a reliable 3-point stroke as the third wing of a swing trio that features All-Star guard Manu Ginobili and defensive specialist Bruce Bowen.

Popovich's foremost challenge next season will be massaging playing time and egos with a roster far deeper than the Spurs typically carry. It remains to be seen, for starters, what role remains for Brent Barry, who was San Antonio's marquee newcomer last summer.

Yet it's a challenge Popovich welcomes, after lengthy struggles to find a bench spark in the wake of Ginobili's emergence and knowing that the Spurs' perimeter shooting could use an upgrade to capitalize on the ability of Tim Duncan and Ginobili to collapse defenses. It's believed that Van Exel, like Horry, isn't interested in heavy minutes during the regular season and wants badly to fit in with the Spurs for a shot at a championship. It was also clear during the playoffs that San Antonio could use a playoff-tested alternative at point guard to the up-and-down Tony Parker, whose only backup last season was untested rookie Beno Udrih.

Missing out on Finley, meanwhile, comes as a blow to the Suns more than any other spurned suitor. With Nash as lead recruiter, and banking on Finley's fond feelings for the desert after starting his career there in 1995, Phoenix was hoping to land the 10-year veteran to start him in the guard slot vacated by Joe Johnson. Finley would have joined Raja Bell, Boris Diaw and the returning Jim Jackson in a group approach to replacing Johnson.

The Suns, though, could only offer Finley a veteran minimum salary of $1.1 million for next season. Failing to land Finley doesn't necessarily knock Phoenix from its top-two perch in the West, after the Suns made their own series of roster tweaks, but figures to make it tougher for them to close the gap on the team that knocked Phoenix out in last spring's Western Conference finals.

"Of course we are disappointed, but to Michael's credit, he didn't just take the money," Suns president Bryan Colangelo said. "He talked about a chance to win and ultimately he decided to play for the defending NBA champions."

The Heat, widely regarded as the favorites in the Finley chase, were offering a starting salary at the full mid-level exception ($5 million) and the chance to team with Shaquille O'Neal and Dwyane Wade. Yet with the Heat already having added Antoine Walker, Jason Williams and James Posey in a five-team trade last month, Finley ultimately decided to pass on seeing how he'd fit into that mix. Instead he joins a club known for meshing quickly, with Duncan serving as the only constant on three very different championship teams.

Finley's decision will also come as a blow to the Mavericks and particularly star forward Dirk Nowitzki, who with Finley and Nash formed what was known in Dallas as a close-like-brothers Big Three. The Mavericks didn't want to see Finley follow Nash to Phoenix, but they were rooting against San Antonio, too, hoping their former face of the franchise would choose Miami or Detroit after the fruitless trade attempts.

The Mavericks decided they had to waive Finley because the amnesty clause will spare Dallas future luxury-tax payments on the nearly $52 million it still owes him. Mavericks owner Mark Cuban estimates the total savings over the next three seasons to be closer to $90 million, because Finley will receive his remaining Dallas salary in annual installments of less than $5 million.