It's hard to believe this now, knowing how drastically and shamefully their seasons differed, but it's a true story.

Larry Brown and Phil Jackson were motivated by a similar force when they washed ashore on opposite coasts to coach two of the most glamorous franchises on the NBA map. 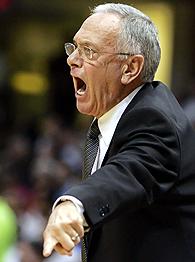 Yet the force I'm referring to here is Red Holzman.

The legendary Holzman, remember, was one of Brown's original hoop heroes. Coaching the Knicks would have never been Larry's dream job without memories of Red.

Coaching the modern-day Knicks was Brown's chance to be Holzman.

We can't know for sure, of course, but it hardly seems presumptuous to suggest that the late, great Holzman would rather not be linked to Larry. You suspect that he'd be happier to know that he was the Red -- as opposed to Red Auerbach -- who helped motivate Jackson to reunite with Kobe Bryant.

The Zen Meister knew today's Lakers would be years away from giving him a shot to break his nine-ring tie with Auerbach. But Jackson came back to them anyway, recalling that the Red who mentored him -- Holzman -- resurfaced in 1978 after a year away to coach the Knicks for four more seasons, none of them spent anywhere near title contention.

Jackson then delivered those 10 extra wins pundits like me promised. Check that: Jackson's Lakers won 11 more games than they had in 2004-05 and, with so much structure and confidence coming from the coach, went on to seize a 3-1 series lead over second-seeded Phoenix before their first-round fairy tale collapsed.

Brown, conversely, dragged the Knicks down to the unspeakable depths of 23-59 -- exactly 10 wins worse than the season before -- with what is widely regarded today as perhaps the worst coaching job in the history of professional sport.

In case you've forgotten what Brown did for his hometown team in Year 1, those giggles you hear in the background are the fifth-graders who have calculated that New York, with a $125 million payroll, spent nearly $5.5 million for every victory under Brown.

Or maybe it's America laughing at the Knicks louder than it ever laughed at the Clippers.

The Knicks were expecting the Brown who, way back in early 1990s, even made the Clips credible for a minute. Instead they got a guy who didn't exactly remind you of the Brown who took the Detroit Pistons to two straight NBA Finals. This Brown feuded publicly with point guard Stephon Marbury for months, alienated several of Marbury's teammates with frequent public criticism and set an NBA single-season record with 42 starting lineups while narrowly avoiding the first 60-loss campaign in Knicks annals. 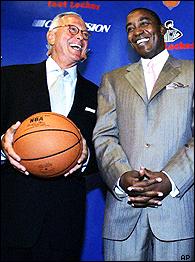 Don't be surprised when you soon hear that the Knicks and Brown have formally agreed to a buyout arrangement that, based on early estimates from industry sources, will pay Larry at least $20 million.

Why not the full $40-something million Brown is owed over the next four seasons? Because the Knicks will inevitably tell Brown that he'd have to serve as some sort of nebulous, out-of-sight consultant to collect every penny on his contract, whereas a buyout would free him to make coaching stop No. 12.

Don't forget that the Sacramento Kings and the madcap brothers who own them are looking for a defensive-minded coach with a name big enough to make a splash.

Don't forget, furthermore, that Brown doesn't yet know Joe and Gavin Maloof but does know Golden State Warriors owner Chris Cohan, his friend and summertime neighbor in the Hamptons.

In other words, Brown has options. The safe bet is that the 65-year-old, for all his health issues, will indeed coach again. The stain on Brown's résumé, however, is permanent this time. Messy as his Detroit exit was, chances are his 2004 championship and the Pistons' seven-game Finals battle with San Antonio last spring will be discussed 20 years from now more than the divorce details. Yet this is different. It seems an even safer bet to say that historians will be bringing up his short and nightmarish Knicks stint quite often, no matter where Larry goes from here.

If he leaves now?

The Knicks, of all teams, would be the first and only of Brown's eight NBA teams that he could not get to the playoffs.

If he leaves now?

For all of Brown's moving around, in college and the pros, Madison Square Garden would be the first address where the Brooklyn-born, Long Island-reared coach couldn't last even 12 months.

Isiah Thomas, after all of his own foibles, did try to make shake-up trades that gave him Eddy Curry, Jalen Rose and Steve Francis. Brown gave the impression that he loathed coaching everyone on the payroll, which created a long list of reconciliations New York would have needed to see to have any hope of being competitive next season. The whole sad drama wound up (somehow) turning Marbury into a sympathetic figure, (almost) made Jerome James look like a free-agent bargain and (pretty much) ensured that Brown would have to go.

The solace for Knicks fans who thought they were getting a bona fide savior -- the most impactful free agent they could have signed last summer -- is that Brown's deep-pockets bosses are prepared to buy their way out of the marriage.

The anti-Thomas set will also happily note that Isiah, should he replace Brown as expected, would be coaching for his Knicks life. You have to figure it would seal Isiah's own ouster if the roster he stocked with all those hard-to-move contracts doesn't play markedly better for him than it did under Brown.

Someone will undoubtedly suggest that Thomas' post-Pistons legacy, after all the mistakes he's made, can't be saved at this stage. No matter what happens. Probably so, but I submit that the glow of Brown's legacy has been permanently dulled as well.

He won't be tainted forever, since only gambling or steroids or something similarly sinister taints you forever in sports, but one graceless season in Gotham guarantees that Brown will never remind anyone of Red Holzman.

Which was Larry's goal when all this Dream Job stuff started.