What happens in the Vegas Summer League doesn't have to stay there.

Let's dribble into the teeth of the buzz from my week in Sin City before (A) someone tells me differently or (B) somebody realizes I used almost the exact same introduction for one of last year's Vegas columns. 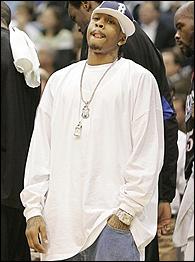 Allen Iverson answers were scarce in the desert. There were early rumblings in Vegas that the Sixers indeed were considering a multiplayer deal that, at its core, would have swapped Iverson for Kenyon Martin and Andre Miller. That's more than the Sixers got for Charles Barkley, you'll recall, but Philly ultimately declined.

No real mystery why, either. Taking on Martin, alongside Chris Webber, would give the Sixers two high-priced alumni from the scary world of microfracture knee surgery, which wouldn't exactly boost Billy King's approval rating around town.

Philly's problem, though, is that no team in circulation wants Iverson more than Denver, which can't make a much stronger offer than Martin and Miller or Marcus Camby and Miller. Boston remains highly interested, as well, with Paul Pierce said to have given the concept his blessing, but that appears to be as deep as the list goes at present. Barring unexpected amendments to the list, Philly will have to deal with at least one of those teams, even if the trade ultimately takes the form of a three- or four-team scenario.

Or else the Sixers can bring Iverson back in October after he has spent a summer more out there on the trading block than he ever had been.

Atlanta continues to stand out as the most ideal Iverson destination on this scorecard, especially after A.I. moved his family there this summer. Iverson makes basketball and business sense at Philips Arena -- maybe more than anywhere else on the NBA map. The Hawks need a ticket seller, have room for a dynamic star to pair with Joe Johnson and possess several quality youngsters to assemble into a quality trade package. Ongoing ownership uncertainty with the Hawks, however, keeps them on the periphery.

What next? The vibe circulating in the Vegas stands is that no one will be surprised if this saga consumes most of the summer, with Philly naturally hoping that waiting will persuade serious bidders to step up their offers.

I am sure Martin, even though he's finally back on speaking terms with coach George Karl, still wants out of Denver even more than the Nuggets want to move him. Dallas and Minnesota are on the short list of teams that have considered gambling on the remaining five years and $72 million left on Martin's contract, and sources close to the 28-year-old say he's openly wishing for the phone to ring with the news that he has been relocated.

Heard an interesting tale about LeBron James that would have caused a real panic in Cleveland if James hadn't agreed to a contract extension by now. 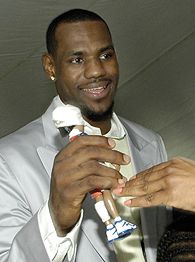 Turns out LBJ and his buddy Jay-Z, according to Stein Line operatives, were spotted lunching in midtown Manhattan earlier this month. Jay-Z, of course, is a part-owner of the New Jersey Nets and has convinced paranoid Cavs fans he eventually will lure LeBron away from the hometown team to join the Nets, perhaps just in time for their eventual move to Brooklyn.

There's nothing you can really do to stop LBJ and Jay-Z from having lunch or being friends, so you might as well learn to live with these kinds of sightings.

Jay-Z certainly set off the league's tampering censors with his recent statements in Sports Illustrated about advising James to "come to the Nets" if he doesn't like how the Cavs' future looks. That was blatantly over the line. If it happens again, look for the Nets to be tagged with a significant financial penalty.

In general, though, tampering charges aren't even considered unless a team out there files a complaint. The Cavs, to date, haven't registered a complaint.

Commissioner David Stern, furthermore, would never tell LeBron whom he can and can't befriend.

The league office, I'm told, has no problem with discreet, fatherly or innocent-looking interactions. Magic Johnson, for example, is still a Los Angeles Lakers part-owner who does instructional videos with prominent players from other teams. It's not hard to imagine Magic being asked for advice in those settings. You also can safely assume no one will be telling Michael Jordan he no longer can serve as a telephone mentor to Dwyane Wade and Carmelo Anthony, even though MJ is officially back in the game with the Charlotte Bobcats.

LeBron and Jay-Z will run into problems only if they mug for cameras, tell reporters they're plotting to work together someday or otherwise trumpet the fact that they like to hang out. Getting spied on at a restaurant doesn't qualify.

Given that LeBron only signed a three-year extension with the Cavs that can make him a free agent in the summer of 2010 -- just like Wade in Miami and Chris Bosh in Toronto -- don't Clevelanders have every right to fear the worst?

Of course they do.

But we interrupt their sleepless nights to remind folks that the three-year plan is really only a one-year difference from the maximum extension James, Wade and Bosh could have signed. If those three didn't opt for the three-year deal with a player option for the fourth season, they would have signed a five-year extension with an opt-out to experience unrestricted free agency after Year 4, as seen in Denver with Anthony.

In other words, Clevelanders can be pretty much as happy with the three-year plan as they would have been with a five-year extension.

The Cavs were going to get just four years, at most, to convince LeBron that they'll be competing consistently for championships in his prime years. They have only three now, but I'd say that's better than two.

James, remember, is the one NBA superstar who had the earning potential from endorsements to hold off on signing anything this summer. If he really wanted to play in New York, LeBron is the one guy who could have played out two seasons with the Cavs waiting for unrestricted free agency, then signed a contract with the (way) over-the-cap Knicks in summer 2008 starting at a measly 5-plus million dollars.

LeBron is giving the Cavs three years instead, four if you count the final season on his rookie contract. That's just like Wade in Miami, where the NBA Finals MVP can become a free agent as soon as Shaquille O'Neal's five-year, $100 million contract expires.

I'd take it, Cleveland.

I haven't changed my opinion, either.

Being the first modern-day athlete in any sport to beat the supposed Cleveland curse and lead the Cavs to a championship is more valuable to LeBron's legacy than anything.

He can't change the fact that Wade was the first franchise player from the Class of 2003 to lead his team to a championship. But bringing a parade to the long-suffering denizens of Lake Erie, without a sidekick of Shaq's stature, is how he can one-up Wade. That dream scenario is a bigger potential payoff for this No. 23 than anything the Nets or Madison Avenue can do for him.

One more thing: If LeBron leaves the Cavs without a championship, it does go on his record, too.

Which is another good reason for him to stay awhile.

The reaction to James, Wade and Bosh signing the shorter extensions has been pretty much the same from every team executive I've spoken to in the past week.

The message: Expect the league to push for shorter guaranteed contract lengths in the next round of labor talks.

The current labor deal runs through 2011, with a league option to extend it through 2012, but the talk already has started about league owners urging Stern to push for shorter maximums after some of the league's biggest names actually requested less than the max.

• My best people-watching tale from the Strip: Dirk Nowitzki, Jason Terry and Mark Cuban were spotted out together on more than one evening while I was covering summer league in Vegas, all three having arrived at the same escape destination after their Finals disappointment. So it seems fair to say things can't be too uncomfortable between the Mavericks' franchise player and the boss after Nowitzki's recent critical comments about Cuban's interactions with referees.

• How did the Lakers, offering the exact same contract as the Clippers, convince Vladimir Radmanovic to switch locker rooms at Staples Center? The Lakers, according to sources, promised a starting spot to Radmanovic. (The Clippers wouldn't, but they also really couldn't with a much deeper roster, which has to make them feel as good about themselves as snagging Tim Thomas to replace Radmanovic did.)

• Have to correct my recent assertion that the Timberwolves, in their pursuit of Mike James, were unable to tempt Toronto with a sign-and-trade package featuring swingman Trenton Hassell. Sources say that Hassell is actually the one midpriced Minnesota player the Raptors would have considered for James but that the Wolves were unwilling to move him. Minnesota thus was forced to use its $5.2 million midlevel exception to sign James, landing him with a four-year deal worth $23.5 million.

• First veteran move by Knicks rookie Renaldo Balkman? When I asked him how many Rolando Blackman cracks he hears daily, Balkman said: "We set up a little team thing. If the trainers call me that, they have to take me to dinner."

• Great Britain has a new American coach, Chris Finch, who was in Vegas scouting some of his players (such as Portland draftee Joel Freeland and free-agent hopeful Pops Mensah-Bonsu) while also continuing his attempts to secure Chicago's Luol Deng and Ben Gordon as national team teammates.

Deng and Gordon both have London backgrounds and have been invited to join the newly formed G.B. squad as early as this fall as the Brits attempt to climb sufficiently high on the world ladder to claim the automatic bid that awaits them for the 2012 Summer Olympics. The host nation is guaranteed a spot in the 2012 field, but the British Olympic Association and the sport's world governing body (FIBA) will allow Finch's team to use that spot only if the team proves itself to be competitive, starting with a legitimate run at qualifying for the 2009 European Championships.

• Blazers rookie Brandon Roy probably didn't get enough praise, starting right here, for his play in Vegas, especially considering he shot better than 60 percent from the field while primarily playing point guard for the first time in his career. "He's smooth, efficient, doesn't force anything," one scout said. "He beats you with his brain."

The early forecast for LaMarcus Aldridge isn't nearly as complimentary. But that won't discourage the Blazers. They know they've drafted a two- to three-year project big man who's going to be worked over physically as a rookie. "I'm going to get stronger," Aldridge insists, "and I'm going to get better."

• Amare Stoudemire rates himself at "a cool 75 to 80 percent" after playing three summer-league games for the Suns. He's scheduled to be back in Vegas this week for Team USA trials and says he already has realized his main goal for this month just by waking up the morning after games without major pain. As for less-than-glowing reviews of his explosiveness in those games, Stoudemire said: "If people do take shots, that's cool. That's what fans and media do. That doesn't bother me. I'll definitely be ready for October." In short, everything's cool.