Next season's 82-game schedules are out for all 30 teams.

The next natural step is combing through all those schedules to identify the most important and attractive games, those dates which require prompt punching into your space-age calendar of choice.

Luckily for you, we've already done it here. The following is our annual summertime list of standout dates from the new NBA schedule: 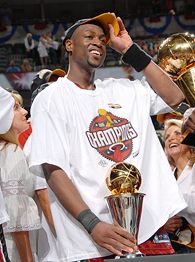 Oct. 31: Opening Night
Looks like someone in scheduling is pretty excited about a major (but long dormant) TV market's expected return to prominence. The Chicago Bulls haven't won a playoff series since Michael Jordan left them nearly a decade ago, but Ben Wallace's debut in Bulls colors has been deemed sufficiently promising to score the lead-off slot on a two-game Halloween Night ... against the defending champs, no less. Dwyane Wade, Shaquille O'Neal and the rest of the Miami Heat will be collecting their rings before tipoff, although it remains to be seen whether Pat Riley will be slipping his on as coach or merely as team president.

A bit of bonus advice: If we learned anything during the 2006 playoffs, it's that you don't sleep on the West Coast nightcap. We concede that it'll be a late start in the East, but Phoenix at Los Angeles Lakers is a rematch of last season's thrilling seven-game series, serving up an immediate installment of Kobe Bryant vs. Raja Bell and Amare Stoudemire's likely return to the Suns' starting lineup.

Nov. 1: Opening Night for almost everyone else
Atlanta at Philadelphia is a fitting opener for Allen Iverson fans. The Answer will be playing his first game since the Sixers yanked him off the trading block and vowed not to move him ... but it comes against Iverson's new hometown team. Iverson, don't forget, recently moved his offseason residence to Atlanta. If that sort of back story doesn't get you revved up, perhaps we can tempt you with ESPN's maiden doubleheader of the season: Washington at Cleveland to quickly reopen Gilbert Arenas' free-throw wounds from the playoffs, followed by the Los Angeles Clippers at Phoenix in what figures to be a chilly reception for Sun-turned-Clipper Tim Thomas.

There's plenty more to monitor right from the start of this six-month marathon: Isiah Thomas taking the New York Knicks to Memphis in his first game as Larry Brown's successor; No. 1 overall draft pick Andrea Bargnani making his NBA bow on the road when Toronto visits New Jersey; and the SuperSonics starting what some locals fear to be their final season in Seattle with a home date against their Pacific Northwest rivals from Portland.

Nov. 2: San Antonio at Dallas
The Mavs, still smarting from their NBA Finals heartbreak, are granted the latest possible start time to the new season. The problem? Waiting until Day 3 doesn't seem like such a bonus when the opener pits them straight away against the San Antonio Spurs. At least the game is in Dallas, followed by yet another playoff rematch in the second half of a TNT double shot: Denver at the Clippers in what looms as the first official game back together for Kenyon Martin and Nuggets coach George Karl.

Nov. 5: Houston at New Orleans/Oklahoma City
The Hornets' home opener is their first of six scheduled appearances at New Orleans Arena. The presence of NBA TV's cameras also make this (fingers crossed) the first national TV glimpse in months of Tracy McGrady and Yao Ming in uniform for the same game.

Nov. 8: Detroit at Sacramento
What does Big Ben's departure mean in Detroit? It means that the Pistons, for starters, have to wait a week before getting their first major national TV run. ESPN's doubleheader opens with Phoenix at San Antonio -- also known as Amare vs. Tim Duncan -- before the Pistons visit Sacramento and new Kings coach Eric Musselman. 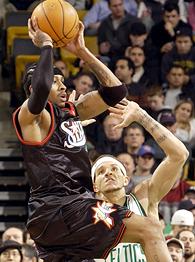 Nov. 10: Denver at Philadelphia
If the Sixers undo their new anti-trade stance and wind up dealing Iverson, Philly fans probably won't have to wait long to see him. The Sixers' opening-night opponent (Atlanta) has long been considered a natural Iverson suitor and no team in the league has chased The Answer harder than the Nuggets.

Nov. 17: Toronto at Los Angeles Lakers
Surely you remember what happened the last time we saw the Raptors and the Lakers sharing a floor in L.A. Unofficial over/under on Kobe Bryant's point total: 50. (We settled on something well south of 81 points after new Toronto president Bryan Colangelo was kind enough to re-do most of the roster around Chris Bosh.)

Nov. 23: Happy Thanksgiving
Unexpected development: The league has scrapped its usual double-helping on Turkey Day. No games ... and no protest here. One major holiday without hoops is no crime.

Nov. 24: Dallas at San Antonio
We're guessing Duncan and his Spurs will relish that Thanksgiving off more than most, since it falls between a Wednesday ESPN date with Shaq and the Heat and this ESPN encounter with Dirk Nowitzki's Mavs.

Dec. 14: Orlando at Charlotte
You figure this game made it onto TNT's schedule strictly on the premise that J.J. Redick's back will be sturdy enough to set him against the Bobcats' Adam Morrison. After the Fran Vazquez fiasco from the 2005 draft, Orlando can only hope.

Dec. 22: Philadelphia at Boston
It's Iverson's first game in the land of green since Boston unleashed a torrent of AI trade speculation by almost making him a Celtic on draft night. That should give this famous rivalry a much-needed jolt.

Dec. 25: Merry Christmas
No one will accuse the NBA of holiday excess this season. After a lights-out Thanksgiving, there's only one Christmas Day offering instead of the usual two or three ... and you only get one guess to identify it. That's right: It's Lakers at Heat -- the first Kobe vs. Shaq meeting since O'Neal won his first championship ring without Bryant -- on ABC's first broadcast of the season. For the third Christmas running.

Jan. 1: Boston at Portland
There are only two games on the first day of 2007 and the best of those two is Sebastian Telfair's first game in Portland as a Celtic.

Jan. 6: Detroit at Chicago
Wow. Didn't see this coming. The first of four Pistons-Bulls games isn't until January, isn't in Detroit and isn't on ESPN or TNT. NBA TV will have Big Ben's first encounter with the team that made him famous.

Jan. 20: Sacramento at Detroit
We probably shouldn't be surprised that this one didn't make the national TV cut, given that it dredges up an episode league officials naturally pray we'll somehow forget: Ron Artest's first game back at The Palace of Auburn Hills since the sadly unforgettable Pacers-Pistons brawl on Nov. 19, 2004. Artest was dealt to the Kings in late January, just a month before Indiana's first of two scheduled visits to Detroit last season. The Kings had already been to The Palace by the time they acquired Artest.

Jan. 21: Dallas at Miami
The every-Sunday portion of ABC's schedule tips off with a Finals rematch: Mavs at Heat. Unofficial over/under on D-Wade's free-throw attempts: 23.

Feb. 1: Cleveland at Miami
You have to wait three months for your first LeBron vs. D-Wade duel this season, but then you get three in the month of February.

Feb. 16-18: All-Star Weekend in Las Vegas
The most anticipated three days of All-Star gluttony in our time? Pretty safe bet.

Feb. 22: Miami at Dallas
Another Finals rematch, this one on TNT. Of greater importance, of course, is the fact that the league's annual trading deadline arrives at 3 p.m.

Feb. 25: Chicago at Detroit
OK. This is more like it. Big Ben's emotional return to Motown is a Sunday lunchtime date on ABC, followed by LeBron vs. D-Wade in Cavs at Heat. Not a bad afternoon. Not bad at all when you can also count on a bonus session in the evening on ESPN: Sacramento at Indiana for Artest's lone Conseco Fieldhouse appearance of the season.

March 1: Charlotte at Portland
Morrison visits Portland for the first time as a pro, after the Blazers ignored the pleas of their fans who wanted them to bypass LaMarcus Aldridge and draft the former Gonzaga star at No. 2 overall. Maybe the Bobcats' new president will make the trip, too, since MJ -- like Morrison -- slipped to No. 3 in 1984 when the Blazers decided they had to have Sam Bowie.

March 17: Utah at Cleveland
We've been writing about this one for three years, but St. Patrick's Day should finally bring us Carlos Boozer's first game in Cleveland since his unforgettably messy exit in the summer of 2004. After injuries intervened each of the last two seasons, we'll go out on a limb and guarantee Boozer's presence for the long-promised boo shower awaiting him. Just don't ask us to explain why this season's only Cavs-Jazz game in Utah is on Valentine's Day instead of this one.

April 1: April Fools' Day
The serious portion of the afternoon comes via ABC. In a re-run of last spring's two conference finals matchups, it's Miami at Detroit followed by Dallas at Phoenix.

April 4: Chicago at Detroit
Big Ben's second visit to Motown will be carried by ESPN and comes just a few days after the Bulls play host to the Pistons on TNT on March 29.

April 4: Seattle at New Orleans/Oklahoma City
Let's be real: Chris Paul vs. Luke Ridnour is a passable matchup at the point, but it's not the hook here. This will be the Sonics' first visit to the Ford Center in OKC since the team was purchased by an OKC ownership group, amid widespread suspicion that the new owners want to move the team to the Ford Center. ASAP. (The Hornets' first of two home games against Seattle, on Feb. 23, will be played in New Orleans.)

April 15: San Antonio at Dallas
Can't say for sure that the Texas rivals still will be battling for the No. 1 seed in the West this late in the season. Yet it does seem safe to suggest that this is a fine way to bid farewell to the regular-season portion of ABC's coverage and shift into playoff mode.