The Commish himself was actually one of the first folks, back in June, to crack the joke about why he liked the NBA's new synthetic ball so much better than the old leather one.

The new one features twice as many David Stern signatures.

Yet Stern also would be one of the first to concede, less than six months later, that no one's laughing now. People around the league are asking lots of questions instead, starting with this one: Will the new ball even make it to the All-Star break?

It's a valid question, too, in the wake of Stern's acknowledgment earlier this week that "we could have done a better job" involving players in the ball change ... and that "we've got to do the right thing here" ... and that "the right thing is to listen to our players." A good percentage of whom have been slamming the new ball's playability since the first day of training camp.

The following FAQ covers the latest sphere of issues:

What can we infer Stern meant when he also said "everything is on the table?"

The follow-up message emanating from the league office is that everything really means everything.

That's up to and including the possibility that the leather ball will be resurrected this season, even though more than two months have elapsed since camps opened and the new balls were rolled out Oct. 3.

Another option -- technically -- is making modifications to the new microfiber composite ball instead of going back to leather. For weeks, NBA executive vice president of basketball operations Stu Jackson has been interviewing players to record specific complaints and take them to Spalding, which has been manufacturing NBA basketballs since 1983. Spalding, meanwhile, is collecting its own samples and data from all the teams as it considers potential fixes, in what company spokesman Dan Touhey described as a "constant dialogue with the league."

In reality, though, it's difficult -- borderline impossible, actually -- to imagine a scenario where a modified ball could be ready in a matter of weeks or even months. Considering that fresh issues still are popping up with the current ball, how could a modified version be properly play-tested and seamlessly integrated with the season already underway?

Everything, then, realistically spans two possibilities. It's either maintain the status quo until the offseason or bring back what Detroit's Rasheed Wallace affectionately refers to as "that old-fashioned cowhide." 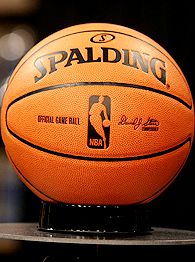 Wouldn't making any change during the season, even resurrecting the old ball players know so well, be problematic?

Yes it would ... according to one of the new ball's biggest critics, no less.

Phoenix Suns guard Steve Nash, the league's two-time reigning MVP, has railed against the synthetic orb as much as anyone. Nash isn't a complainer by nature, but the ball -- in his words -- "tears my fingers apart."

Nash doesn't endorse the idea of going back to leather in midstream, no matter how much he's grown to dread the feeling of paper cuts all over his hands caused by the new ball ... a complaint also registered by a prominent point guard in New Jersey named Jason Kidd.

"It's taken me two months to adjust to this new ball, but I've made the adjustment," Nash said by phone Wednesday as he boarded the Suns' flight to New Jersey, with teammates still buzzing in the background after Nash's 20 assists in Tuesday night's rout of Sacramento. "I'm actually OK with the new ball now."

"I don't think we could or should change during the season," Dallas Mavericks owner Mark Cuban told ESPN.com. "Guys have worked too hard to adjust to it, and changing could create all kinds of problems.

"We have to start taking a close look at what we can do to make the ball better for next season, and if we can't [then] explore going back to the old ball [next season]."

The Mavericks, Cuban added, have begun to study "the solutions Major League Baseball teams use with pitchers to prevent blisters and cuts."

That's because, at least twice recently, Mavs star Dirk Nowitzki has looked down at his left hand to discover blood trickling out of one of his fingertips. It happened once as he was opening his refrigerator at home. More worryingly, it also happened on the floor at the Verizon Center before Monday's game against the Washington Wizards.

Nowitzki shared those stories Tuesday night with the league's Jackson after Dallas' victory in New Jersey. He also urged Jackson to look at the ravaged hands of Mavericks assistant coach Brad Davis, a 15-year NBA veteran who still rebounds hundreds of shots and catches and makes hundreds of passes daily working with Mavs players in practice and pre-game preparations.

Asked if he'd welcome an in-season switch back to the leather ball, Nowitzki said Wednesday: "I definitely would. I know our whole team would."

When reminded that he hasn't handled a leather ball since last season, Nowitzki disputed the idea that he'd need time to re-adjust.

"I think we're pretty much all used to the old ball," he said.

Cleveland's LeBron James echoed that Wednesday, telling local reporters: '"We've used it a long time. It wouldn't be hard to make the adjustment.''

What prompted Stern's mea culpa in Tuesday's New York Times, when he unexpectedly volunteered that the league didn't sufficiently involve players in the first significant NBA ball change in 35 years?

It's true that Stern's comments came just four days after the NBA Players Association filed a grievance about the matter with the National Labor Relations Board.

It's also true that the grievance provided an infusion of headline-grabbing spotlight to player discontent. (So much for the league's initial hopes that resistance to the new ball, like last season's implementation of a business-casual dress code, gradually would fade.)

But even the players' union admits that the season-long, steady stream of complaints from star players, as well as rank-and-filers, probably played a bigger role in changing Stern's stance than the grievance did.

It boils down to this: The NBA has been forced to consider immediate action, grievance or no grievance, because it appears that the new ball actually is injuring players and coaches.

That doesn't make the players' initial flurry of complaints less valid. The ball continues to be slammed by many of them as too sticky when dry, too slippery when wet and too unpredictable when it hits the hardwood, backboard or rim. Miami's Dwyane Wade scoffs at the perception that the new ball actually helps shooters proficient at banking shots in off the glass, telling the Fort Lauderdale Sun-Sentinel this week: "My bank shot is no longer existent. My game-winning shots, I'm telling you, it's [in the] past."

None of those concerns, though, are unanimous. You probably haven't heard much from these guys, but there are a handful of players out there who have either publicly endorsed the new ball or simply chosen to accept it.

Nash, quoting Suns player representative Eric Piatkowski, estimates that there's a 60/40 split on his team of players against and for the new ball. Portland's Jarrett Jack openly "loves it." Philadelphia's Kyle Korver, one of the game's most feared perimeter shooters, said early in the regular season: "Now that I've used it, I actually really like it."

Golden State point guard Baron Davis, reporting none of the problems Nash and Kidd have had, told ESPN.com on Thursday: "I don't have strong feelings about the ball. Just like any kind of change, it took a while for everyone to adjust to it. But a ball is a ball. I don't need a certain kind of ball to be effective. We're NBA players. As professionals, we can adapt to anything."

When you're talking actual cuts and abrasions, there isn't much to debate. That's a problem.

Especially in a league that, don't forget, was the first to institute infectious-control rules when players are bleeding on the floor.

Why is the new ball causing cuts and abrasions?

Air-tight theories are scarce. No one knows for certain.

Spalding, asked this week to respond to player complaints about the cuts, declined comment.

But Nash thinks he has a pretty good explanation. The new ball, as he explains it, is "friction-ey."

The NBA, as a result, has a whole new brand of abrasions to go with the floor-burn variety.

The difference is that the damage caused by the new ball, unlike the immediacy of a floor burn, appears to be gradual. In extreme cases like Nash's and Kidd's, all the little abrasions are adding up until they reach the point of full-blown cuts ... which also leads one to wonder what their hands, given how they looked on Dec. 1, will look like if this ball is still around on Feb. 1.

Why this man-made ball is so much more "friction-ey" than the D-League's or NCAA's synthetic model is not quite clear. Yet when you add up the new ball's friction factor and the knowledge that pros spend more hours with a ball in their hands than anyone else playing the sport in this country -- be it college kids, high schoolers or weekend pick-up warriors -- the unlikely rash of paper cuts in the NBA starts to make sense.

There are many more things for Stern to consider.

If you're going to switch back to the leather ball, when is the most equitable time to do so? Jan. 1? After the All-Star break? At no point, until the final night of the regular season on April 18, will all 30 teams have played the same amount of games.

The paper-cut phenomenon didn't become a big talking point until recently. Are there more unforseen problems coming soon if the league sticks with the new ball?

If you switch back to the old ball, how soon can fresh leather be ready? Teams used to get a new batch of leather balls at the start of every season and, remember, had to break them in to get them game ready.

If you don't make a change sooner rather than later, doesn't that just keep the story in the news?

And if you're admitting now that the new ball was foisted upon the people who rely on the basketball most -- and without properly including them in testing/feedback/implementation -- doesn't this next decision have to involve an every-man vote that polls 400-plus players?

Stay tuned. This controversy obviously isn't dribbling away quietly from the sporting consciousness, as many expected.