He knows that uncomfortable questions will be unavoidable once his Minnesota Timberwolves mathematically are doomed to a third straight season out of the playoffs. 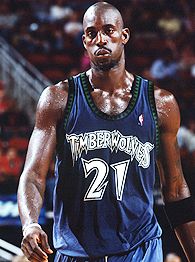 He knows that if you're giving the Wolves any thought these days, it's only to wonder whether years of disappointment and Wolves mismanagement finally have convinced the 30-year-old to push for a trade.

He also knows, even as his 12th season drains away, that he'd rather withhold those thoughts from public consumption for as long as he can.

Yet if anyone in the NBA can identify with persistence, it's KG. So when he repeatedly spotted ESPN.com in his beloved 'Sota last week, Garnett eventually relented. He consented to take a few minutes' worth of questions after Saturday's practice  after practice, lifting weights and a round of extra shooting that -- shocker -- made him the last Wolf off the floor.

Q: Your future comes up more than ever because of the opt-out clause in your contract after next season. But forget what media types like me have been saying. I'm sure you've heard some of your former peers like Charles Barkley and Reggie Miller on TV urging you to ask for a trade. What's your reaction when they say it?

A: I was telling some friends the other day, my analogy is a house. I've helped build a house or I've built a house [in Minneapolis]. It had old wood in it and I replaced it with special wood and it became a beautiful place. But now because things aren't working right, now you ask me to move out of something that I helped build. That's hard.

People who have experienced moving, they can look at [my situation] and say it's probably an easier process [to request a trade]. But I haven't done that, so it's not as easy for me. I can't speak with the perspective of people who have [switched teams]. You hear the stories. I've got personal friends that moved from teams. But instead of replacing some of the appliances or replacing some of the pipes or replacing things in the house, you just ask me to move? That's a difficult call for me.

But losing's also hard for me, too.

Q: Another season like this must be killing you then?

Q: So one of the problems 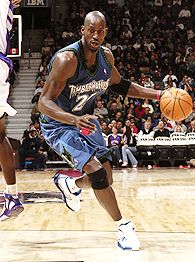 Q: I've heard that the Wolves were so convinced at one point in early December that Allen Iverson was Minnesota-bound that management was getting owner Glen Taylor's plane ready to pick AI up in Philly. Were you led to believe that an Iverson trade was that close?

A: Freddy [assistant general manager Fred Hoiberg] was keeping me in tune with what was going on and when that happened  I don't know. I don't know. I'm not gonna front. I was very excited. And then at the 11th hour, things fell through.

Q: Mark Madsen told me that the question he gets most from people on the street or in restaurants is whether you're going to stay in Minnesota or ask to be traded. But Madsen also told me that he and the rest of your teammates never ask you those kinds of questions. Doesn't that surprise you a little?

A: I let it be known to everyone [in the organization] that we're going to finish this year out and everybody's going to assess and do what they have to do for themselves. And I'm no different from that. But I don't get into detail or the distraction of talking about something that I haven't really in depth researched or talked about myself.

Q: But after spending a few days in town, I have to tell you, there's a feeling in the air that this is all coming to a head and that the end is near for the Kevin Garnett era in Minnesota. You really don't feel the same thing?

Q: If you end up staying with the Wolves and one trip to the Western Conference finals is as good as it gets in your career, won't that be hard to live with?

A: Absolutely. To fulfill myself and my appetite, obviously. But like I said, I'm not going to even get into it. Maybe I'll speak to you later on in the future about some other things. Other than that, I'm going to finish these 10 off like it's my last.

Q: It's been said that you dream of being basketball's answer to the late Kirby Puckett in Minneapolis, playing for only one team and delivering a championship to Minnesotans like Kirby did. Is that a valid comparison?

A: When you adopt a city or a city has adopted you, I play my heart out not just for myself and my family but also for this city. That's not to be discounted in anything. I feel like, if you're going to be a face somewhere  lots of guys are faces of the [cities] they play in and I'm the face here. I take a lot of pride in that. Kirby, may he rest in peace, was a dear, dear friend. And he taught me that if management's right, you can win here just like you can win anywhere else. And I've sort of adopted that.

Q: So if you or the Wolves choose not to pursue a trade this summer, do you think we'll still see some major changes with this franchise?