LAS VEGAS -- It remains unclear if he's ever going to wear it, for real or even for fun, but Yi Jianlian awoke Friday with his very own Milwaukee Bucks jersey.

Yi actually has his own mini-collection of Bucks gear now, after being presented with a clothes bundle prepared by the team's equipment man during his first face-to-face meeting with the club officials who drafted him two weeks ago. 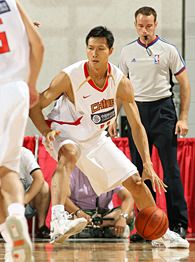 The Bucks' modest goals were met Friday night when, after finally establishing direct contact with their prized draftee, they gleefully watched him open NBA Summer League play with a debut performance that Greg Oden and Kevin Durant had to envy.

Looking much more relaxed than he did during two nervy warm-up games in Dallas, Yi emerged from his sitdown with Bucks management by rumbling for a credible 23 points in Team China's 86-77 loss to the Memphis Grizzlies, coping well in his matchup against the smaller, quicker Rudy Gay.

Gay had 21 points himself and posterized the newcomer with a second-quarter dunk, but not before Yi dunked on him first . . . albeit with a much less emphatic finish.

Squeaked home or not, Yi's drive and dunk was emphatic enough to draw a can-you-believe-this smile from the sheepish Gay, impressing not just the Bucks.

"He made the game look easy," said new Grizzlies coach Marc Iavaroni. "I think he's going to be more physical than people think. And you definitely have to scheme him [defensively]."

Iavaroni also noted that Yi played with "no jitters at all," which was significant after his first two post-draft games with the Chinese national team.

The curiosity and scrutiny his future is attracting -- with Yi's Chinese and American advisers still fuming that Milwaukee selected him and still pushing hard behind the scenes for the Bucks to trade him to a bigger market with more of an Asian population -- clearly affected the mobile 7-footer in losses to Team USA's under-19 squad and the Mavericks' summer-league team earlier in the week. In those games, he looked alternately uptight and out of game shape.

But this was better. Although he still won't even discuss Milwaukee with reporters -- Chinese officials refused to let him speak to the media after the Memphis game -- Yi found some on-court comfort despite racking up seven fouls by halftime. (It takes 10 to foul out in this league.)

The Bucks, though, don't plan to push for more direct dialogue with Yi, even with China scheduled to play four more games here through next Wednesday. Bracing for a drawn-out standoff, they're simply hoping now that Yi will soon accept an invitation from Bucks owner Herb Kohl to bring his family and representatives from the Chinese Basketball Association's Guandong Tigers to Milwaukee later this summer to judge the city and the Bucks' setup for themselves.

The invite was hand-delivered, along with all that Bucks gear, during Thursday night's meeting with Milwaukee general manager Larry Harris, coach Larry Krystkowiak and an interpreter hired by the Bucks.

By game time, Milwaukee's curious (and anxious) contingent had swelled to include Bucks forwards Charlie Villanueva and Bobby Simmons, who arrived unexpectedly at a filled-all-day Cox Pavilion on the Nevada-Las Vegas campus to see the new guy play.

"I felt there was a lot accomplished," Harris said of the face-to-face chat. "He got to know us a little bit and we got a chance to explain why we drafted him, explain the role we envision for him and talk about the opportunity in Milwaukee."

When asked how receptive Yi was to his pitch, Harris added: "He was very pleasant, very engaging. I think he's excited about playing in the NBA. But I made it very clear [to Yi] -- not in a negative way -- that we're not going to trade you."

Look for Magic forward Dwight Howard to sign his five-year extension with Orlando, worth an estimated $85 million, no later than late next week.

Wednesday is the first day free agents can formally sign contracts, so Wednesday will inevitably Rashard Lewis Day for the Magic.

Then as early as Thursday, according to one source, Howard will ink the deal he's been vowing for some time to sign, which will include an option to become a free agent after four seasons. Howard would be under contract through the 2011-12 season, same as Lewis.

Ron Artest's agent, Mark Stevens, recently told ESPN.com contributor John Denton of the Florida Today newspaper that returning to the Eastern Conference "would be something that Ron would really like."

Artest, though, has passed on another opportunity to lobby for a homecoming . . . or any other move.

Amid increasing speculation that Sacramento is considering trades that would send its controversial swingman to either Orlando or New York, Artest said when reached Friday that he is still "looking forward to playing with the '07-08 Kings."

He also said that the Bulls and Pacers -- more than the Knicks -- were his boyhood dream teams.

"Growing up in New York, I always wanted the Knicks to win a championship, but my favorite team was the Bulls," Artest said. "And my best friend Sedric's favorite team was the Pacers. So my career has been a blessing, to play for the two teams that I dreamed about as a kid. [And] the trade to Sacramento was another blessing from God because playing for Rick Adelman elevated my status."

As for what happens next with the 27-year-old, who remains eminently tradeable in spite of all his past foibles with only one guaranteed season (at $7.8 million) left on his contract, Artest said: "I'm the type of guy [that], whatever the organization wants to do, I'm fine with because of the nature of the business."

Given his oft-stated reverence for Adelman, perhaps it'll be Houston if Artest does decide to start lobbying for a new address.

In the first couple years of summer-league play in Las Vegas, which began in 2004, multiple teams were housed at the New York New York hotel.

This year, with the league up to 21 NBA teams participating -- as well as China's national team as it mushrooms in stature -- only one club is staying there.

That became a relevant detail in the early hours of Friday morning, when a man described by police as a "local guy who snapped" opened fire on gamblers from a walkway above the hotel's casino floor. Police said the shooting wounded three people before the gunman was tackled by off-duty police officers.

No one from the Hornets' traveling party was affected by the incident and summer-league representatives said the team has no plans to move to a new hotel.

Casino spokeswoman Yvette Monet told the Associated Press that operations had been fully restored as of Friday morning. "Guests are being informed that it's business as usual," Monet said.