LAS VEGAS -- If Bay Area folks want reassuring signals regarding Don Nelson's willingness to keep coaching the Golden State Warriors, this is where they should look.

This is where Nelson can be found daily, watching three or four games in one sitting. 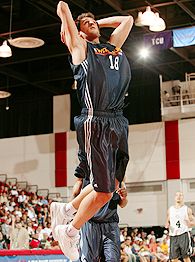 This is where Nelson was seen and heard Monday night, laughing and huddling in the stands with Baron Davis as they took in a Kevin Durant show together.

This is where a Warriors rookie who was born to play in Nelson's system, according to Nelson himself, has generated more excitement than anyone at the NBA's sunbaked Las Vegas Summer League, Durant and Greg Oden included.

By now you've probably heard someone make the inevitable connection between Marco Belinelli and how his quick-trigger game is a Nellie Ball natural. Yet it should be noted that Nellie -- who has yet to publicly confirm that he'll be back on the Warriors' bench next season -- is making that connection, too.

Told by one reporter that Belinelli (pronounced Bell-LEE-nell-ee) has to be some sort of relative, Nellie chuckled and said: "I think it's going to work out real well for the both of us."

For starters, that would require Nelson to state his intention to return for the second year of a three-year deal in his second Golden State stint. Nelson refused again Monday to discuss his future, but sources close to the situation say that the 67-year-old wants his annual base salary of $3.1 million bumped to at least $5 million annually if he's to return for the next two seasons. Nelson made $5.1 million last season because of two $1 million bonuses, one for halting Golden State's 12-season playoff drought and another for getting the Warriors to the second round via their historic first-round upset of the 67-win Dallas Mavericks.

The Belinelli Factor, by contrast, is looking as solid as it can after a couple games at the Cox Pavilion on the UNLV campus. The Italian, taken No. 18 overall by the Warriors in last month's draft, announced himself with a stunning 37 points in Saturday's debut and followed that up Monday with 23 points in Golden State's 94-87 victory over Philadelphia.

Belinelli didn't quite reach that stratosphere against the Sixers, needing 23 shots to get those points, but he continued to play with a poise and fearlessness to back up the Warriors' claim that they just might have snagged the most NBA-ready rookie available.

He's not your typical foreign-born rookie, true. Given his considerable experience back home in Italy, in a league long regarded as Europe's strongest, Belinelli arrived as a much more polished product than most 21-year-olds. But his 5-for-8 shooting from the 3-point line Monday, after a 5-for-7 spree of triples in the 37-point game, is atypical early success from deep for an overseas kid making the transition to the longer NBA shot.

As a teenager in Italy who earned regular playing time at a younger age than 2006 No. 1 overall pick Andrea Bargnani did, Belinelli was proclaimed by basketball officials and media experts in his country to be predestinato ... destined for greatness. No one is putting his NBA prospects in that category -- we haven't yet seen how this crafty 6-5 scorer will adapt physically and defensively to the NBA game -- but the famously hyperbolic Nelson has already seen enough, after two July outings, to declare that Belinelli has the ability to compete for spot minutes at point guard. Challenging Monta Ellis for the starting 2-guard berth left vacant by the deal that sent Jason Richardson to Charlotte is another possibility.

So much for the notion that unpredictable rookies are the scourge of coaches.

"This is one," Nelson said, "that doesn't make me nervous."

As for the notion that Nellie will ultimately decide he's not going to coach Belinelli ...

"I'm worried, but at the same time I'm not worried," Davis said during a break from his unexpected appearance to see Durant. "They'll figure it out. Everyone will play fair because it's a fair organization."

Davis didn't use the word fair by accident, since he's seeking his own contract extension from the Warriors this summer. Yet when asked specifically if Nelson's role in the Warriors' historic late-season surge merits an increase in guaranteed money, just one season into his original contract, Davis insisted: "He deserves it."