LAS VEGAS -- We've reached the midpoint of the NBA Summer League at UNLV, with Tuesday's six games completing Day 5 and five days' worth of games to go.

Sounds like a good time to take Stein Line stock of what's been happening on the court . . . as opposed to the considerable action in the stands at what league organizer Warren LeGarie likes to call the NBA's answer to baseball's winter meetings. 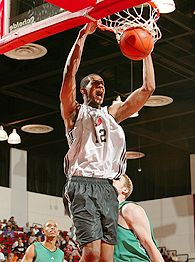 Greg Oden almost got the sympathy vote now that his struggles to cope with a sinus infection and tonsil problem will require a tonsillectomy Saturday, leaving Oden with some underwhelming totals from his first NBA experience: 19 points and 19 fouls in two games.

Fact is, even Oden would insist that we vote for Aldridge . . . if he were still here. It was Oden, after all, who unexpectedly pinned a "beast" tag on the slender ex-Texas Longhorn over the weekend. Not the sort of tag Aldridge is used to.

Yet it's clear that Oden's new frontcourt partner -- who didn't look nearly this confident a year ago, when Aldridge was Portland's top-two pick in Vegas -- has been the Blazers' best player. I was pretty worried for Portland when I saw Aldridge get knocked around last year, but he has returned with a considerable combination of self-belief and constant energy while averaging 21.0 points and 11.0 rebounds through three games. Plus he never gives the impression that he's above summer-league duty, which easily could have been the case after Aldridge rebounded from the shoulder trouble that plagued him here last July to make the All-Rookie Team.

(Honorable mention: Brandon Roy. Word is that Roy badly wanted to play for the Blazers' summer squad again, even after his near-unanimous Rookie of the Year season, but his bosses apparently urged Roy to rest as a health precaution. How antsy is he? During Oden's second game, I saw Roy hiding a ball and dribbling it below his knees while watching from the Blazers' bench.)

It's simply impossible not to pick the Italian. He's become such an instant favorite with the Vegas crowds -- averaging 25.0 points through three games and generally commanding Best Player So Far status from coaches and personnel types in attendance -- that most of his misses from outside are met with a disappointed groan from fans.

Ever since that 14-for-20 shooting spree in Belinelli's 37-point opener, the locals apparently think that Golden State's No. 18 pick is supposed to make every shot.

"But he's not just a shooter," said one Western Conference executive. "Don't be mistaken. He had [Philadelphia's Rodney] Carney isolated at the top of the key, beat him with a super crossover and finished at the rim over two people. He's going to fit right into the way Golden State plays. And he's not as bad defensively as people thought. Philly tried to iso him a few times in that game and he did a decent job." 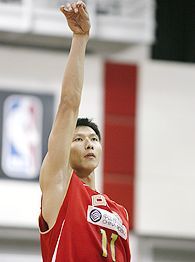 Yet I insist on a Yi mention as well, even though he has struggled unimaginably from the field (26.1 percent) while averaging 13.8 points in four games for team China. His movement, if not quite mechanical, seems a little strained at times to me, but Yi knows what to do with the ball and hasn't backed down in his new environment. When you add up Yi's size, youth and his smooth, high-release, high-arching jumper -- and when you remember that China still doesn't have a single guard who can make the game easier and thus make him look good -- you start to understand why the Bucks were willing to draft a guy they're not even sure they can get to Milwaukee.


From the moment I got my first up-close access to him at the 2005 Vegas Summer League, I've been a big Maxiell guy. That was before anyone knew he could succeed in the NBA as an undersized power forward, back when the Pistons were equally unsure.

He's shed 25 pounds since last season, after getting his first meaningful playoff minutes for the Pistons. That means he's lean and mean in '07, attacking the rim and banging bodies with his usual ferocity . . . even though Detroit didn't demand that he slim down or that he play on its summer team for a third straight year.

I can still remember standing near a boisterous group of Knicks summer-leaguers around this time last year. They were snickering at the sight of Samb, the No. 51 pick in the '06 draft, who wasn't yet carrying 200 pounds on a 7-1 frame.

One year later? It's not exactly widespread knowledge that Samb is actually from Senegal, but we can tell you that the snickering has stopped. Samb took care of that by adding the 25 pounds Maxiell dropped to start filling out a bit and by returning from a year in Spain with a surprising scoring touch to complement his considerable shot-blocking potential.

Strength and stamina remain sizable concerns, but I'm told it's increasingly conceivable that Samb will wind up on the Pistons' roster next season, working closely with famed Detroit strength coach Arnie Kander. With a D-League affiliate in Fort Wayne, Ind., Samb wouldn't have to travel far if he can't get minutes with the Pistons.

The reflex answer, if you had surveyed the stands after the Lakers' first game, would have been Javaris Crittenton, after several successful slices to the rim by the point guard from Georgia Tech in his 18-point debut.

But I'm going with the sentimental choice -- cancer survivor Coby Karl -- because it's not just a sentimental choice. Karl happens to look rather solid already, emerging as the glue guy for the Lakers' summer squad.

He's a late bloomer, but he's also blessed with hoops smarts and proven toughness after overcoming what he's faced already in life at 24. If you can also shoot with the range Karl is showing here, you're going to stand out in the summer league.

Another system player for Phil Jackson in the Luke Walton mode? Could be. Big guards who can pass and move have a future in Jackson's triangle offense, which has never relied on traditional point guards.

Said one falling-in-love West exec: "He should have been a late first-round pick. He's going to play in this league for a long time."


Lowry is ahead on points at present, but one interesting theory I'm stealing from an Eastern Conference personnel man is that these two could form Memphis' answer to the T.J. Ford and Jose Calderon combination in Toronto.

There will be nights, in other words, when you don't know which guy is better until the game unfolds.

Or perhaps new Grizzlies coach Marc Iavaroni will find a way to play them together.

It's too early for full-fledged disappointments. The only true disappointment I've seen in Vegas so far was the unspeakable sight of a young man bringing a bag from McDonald's into an In-N-Out Burger on Tuesday afternoon, something I've never witnessed in 25 years as an In-N-Out zealot. He ate his McDonalds while his dining companion enjoyed the most sumptuous burger in the history of fast food. It was the epitome of sacrilege.

If anything else has troubled me -- apart from the fast-approaching reality that we won't be getting Oden vs. Durant on Sunday night -- it's Flight White's poor showing with San Antonio.

The champs still hope to inject their rotation with athleticism and White is getting a prime shot to impress them after basically spending a year as an apprentice, learning the team's culture. There is a great deal of curiosity in San Antonio, given White's dunking reputation, about what he can do in game situations and what he has learned.

The answer, sadly, appears to be not much. 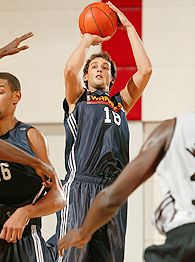 But I should note that my favorite rookie from the class of '06 -- Houston's Steve Novak -- just got here. And I haven't seen him play yet, because the Rockets' only game so far conflicted with Tuesday night's China-Knicks game.

It's a big summer for Novak, too, since he barely played for Jeff Van Gundy after wowing folks in Vegas last summer with his ability to get his shot off and drain 3 after 3.

Novak again brings good size and a quick release to the desert. Every team in today's NBA, furthermore, loves the idea of a 6-10 forward who can stretch the floor with Novak-type range. Yet Novak knows he won't get more playing time next year, under Rick Adelman, if he can't figure out how to stay on the floor defensively. It hasn't happened yet.

No mystery to this list. Sow and Holmes are the only Cal State Fullerton alumni on the 22 rosters in Vegas. Eliyahu is the Maccabi Tel-Aviv forward drafted No. 44 overall in 2006 and acquired by the Rockets, who's now hoping to become the first Israeli to actually play an NBA game.

Eliyahu just got to town, so you can expect to hear more about him later. Lots more, actually. He's the best hoops athlete Israel has ever produced and I desperately need the pick-me-up, with my two Titans off to, uh, slow starts.

After missing all of last season with Toronto thanks to a freak neck injury suffered during a 2006 summer-league practice, Sow struggled mightily in his debut with the Suns. Otis George is the non-roster forward who has Phoenix intrigued early.

Holmes, meanwhile, has yet to get a minute from the Lakers . . . and appears on their roster as Randy Holmes.

My Rookie of the Year favorites: Greg Oden and Kevin Durant

C'mon, people. You know the disclaimer we cite at summer league every year: It's dangerous to get too excited or discouraged about anything that happens in this environment, where the defense, teamwork and refereeing are all so sketchy.

Oden's summer might have ended before it started and Durant might be shooting 9-for-36 from the field, but one veteran personnel man chided me before I could even ask for his assessment of the draft darlings so far.

"Even when Durant misses, his shot is so damn gorgeous," he said. "Their time is going to come. These are 19-year-old kids playing against men for the first time."