It took a day for Ron Artest to react publicly to the news that he's been suspended by the NBA for the first seven games of next season.

Reason being: Artest had to be tracked down in Kenya.

In the latest surreal twist in a career filled with trouble and disappointment, Artest was on an African goodwill mission when he received official word of a suspension that the Sacramento Kings have been bracing for since Artest pleaded no contest in May to a misdemeanor domestic violence charge stemming from a March 5 dispute with his wife. 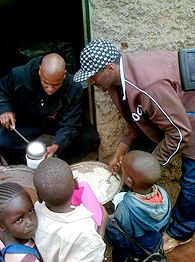 Artest left the country last week as part of an NBA Players Association convoy spearheading a "Feeding One Million" drive, which calls for union chief Billy Hunter and his traveling party to distribute 11 million pounds of rice to the needy in Kenya.

When reached Sunday by ESPN.com, Artest responded via e-mail by sending a statement of contrition ... and an unprompted flurry of pictures from his trip.

"I want to apologize to my family, the NBA, the players association, the Kings, New York City, Hank Carter and the Wheelchair Charities and all my supporters for putting myself in a position to be suspended," Artest wrote.

Hunter issued a statement Sunday saying that the union will "consider all of our options for appeal" on behalf of Artest and Golden State Warriors forward Stephen Jackson, who received his own seven-game suspension after pleading guilty last month to a felony count of criminal recklessness for firing a gun outside an Indiana strip club during training camp while still with the Pacers.

The Sacramento Bee reported in an online story Sunday night that Artest's agent, Mark Stevens, has filed an appeal on behalf of his client to protest the length of the suspension. Artest declined to respond to ESPN.com's question about appeals, merely tacking on a request to his apology:

"Please recognize the other side of Ron Artest." 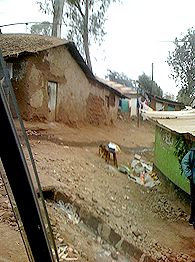 He continued: "I am doing many positive things this summer. ... Me, Maurice Evans, Theo Ratliff and Etan Thomas are holding HIV babies and walking around in the slums where kids have no running water or electricity and no shoes on their feet, feeding rice and beans to kids.

"So it's hard to take my focus off of the poverty in Kenya right now, the continent where my ancestors were brought to America as slaves. I'm so happy to be in Africa helping, so whatever the NBA did to me and Stephen Jackson, I can't think about right now. I am happy to be in the NBA and looking forward to next season.

"I also encourage people to help the Feed The Children foundation and [founder] Larry Jones, because I see for my own eyes the impact it's having on poverty across the world."

After pleading no contest in the domestic dispute, Artest was sentenced to 100 hours of community service, ordered to undergo counseling and complete a 10-day work project, fined $600 and placed on three years' probation.

In spite of all the trouble he has found and caused throughout a controversy-filled career -- Artest has been suspended 11 times by the NBA's count and has played an average of only 59 games through eight seasons because of his chronic struggles to control himself -- Artest's softer side has never been questioned.

His efforts in Africa will surely be dismissed by some as yet another PR campaign to repair his damaged image, but that hasn't stopped a proud Artest from volunteering tales from his participation in the Kenya initiative, during which he and his NBA colleagues have helped deliver five metric tons of rice by boat from Taiwan to Kenya. Joining Boston's Ratliff, Washington's Thomas and the Los Angeles Lakers' Evans on the trip is former NBA player Kermit Washington. 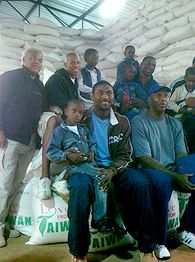 Artest says that he's buying a house in Kenya "so I can travel back in the summers and help out in the slums." He then proceeded, without being asked, to send along several pictures from the trip via e-mail.

The Kings, meanwhile, seem to be sold on Artest's latest round of promises to conduct his on- and off-court business in a more composed, mature manner. Kings president Geoff Petrie, not known for his public declarations, responded emphatically last week to increasing trade speculation about Artest by announcing that "Ron is going to be a King" in 2007-08.

Petrie knew this sort of suspension was coming when he made the statement. The Kings, though, have apparently been impressed by some of the steps Artest has taken since his sentencing.

The Sacramento Bee reported in Sunday's editions that he is back with wife Kimsha -- although their children will attend school in Indiana this fall, living in the home that the Artests still have from his Pacers days -- and that Artest has reduced his role with his Tru Warier record label.

"I think he's really focused on coming back and having a terrific all-around season," Petrie told the paper. "He's going to miss his first seven games, but after that I think he'll be ready to roll."

Artest turns 28 in November and has two seasons left on his contract at $7.4 million each. But he has an early-termination option in his contract that will allow him to become a free agent in the summer of 2008. As a likely free agent-to-be next season, Artest would appear to be highly movable in spite of his past missteps, thanks to his contractual status if nothing else. That's in spite of a roller-coaster, injury-plagued season in 2006-07, which included Artest's telling several teammates in late March that he was thinking about retirement as the Kings drifted to a 33-49 finish.

Asked in June if he's worried about being traded, Artest said: "I think the Kings will make the best decision for the Sacramento fans. And that means winning and getting a group of guys who want to play with each other and win games with each other. I had my best individual season of my career [statistically], but I didn't reach my potential yet. I'm looking forward to getting back in October with the team. I like how we ended our season as far as playing to the very end."