For a man facing what even he calls "the most serious situation and worst situation" that the NBA has ever confronted, David Stern is a fairly lucky man.

In the two weeks since the most painful press conference of his life, when he had to admit that one of his referees allegedly managed to secretly wager on games he worked and that Stern's own staff can't start trying to fix this mess until after the FBI finishes its investigation, check out what's happenened for Le Commish.

• Kevin Garnett was traded to one of his moribund signature franchises . . . with Reggie Miller thinking about coming out of retirement to join KG and the Boston Celtics. 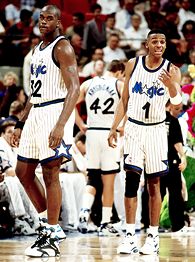 • And now Shaquille O'Neal has been reunited with Penny Hardaway, who merely ranks as the second-to-last player you ever thought The Diesel would play with again, creating yet another headline-grabbing diversion.

Stern's NBA still has some seriously dark days ahead, considering that disgraced ref Tim Donaghy hasn't even turned himself in yet to reignite the scandal and take it to its deepest depths.

The office so often accused of choreographing league developments couldn't have dreamed up a news flurry this interesting.

I can't claim this to be scientific, Hollinger-worthy research, but my own informal gauge of some traffic figures along with the number of e-mail responses to stories about Stern's 70-plus-minute press briefing on July 24 and the big stories that have happened since suggests that people prefer to talk about Garnett finally leaving his beloved 'Sota or this wave of 1990s greats threatening to come out of retirement than Donaghy. At least until we learn more about what Donaghy did.

Can Penny, plagued for much of this decade by arthritic knees, actually help the desperate Heat?

Especially at 36 and after playing a whopping four games when we last saw him during the 2005-06 season?

The safe assumption is no. The inevitable reaction is that he'll only make Miami older.

But just try to tell me that you can't wait to see what happens when Shaq and Penny and Dwyane Wade are all together.

You won't be able to resist, no matter how ominous and long-lasting that Donaghy cloud is.

After all, short of Kobe Bryant and Shaq winding up together again somehow, this is the most unlikely (and thus potentially combustible) pairing that the NBA could deliver.

You have to believe that Shaq was asked by Pat Riley to give his blessing before Miami completed this signing. You also have to conclude that Hardaway -- who auditioned last season for Seattle, Atlanta and the Los Angeles Lakers -- has been looking pretty good in his workouts if he's convinced Riles to put Shaq and Penny back together. You likewise should note that Hardaway's minimum-wage deal won't even be guaranteed for a full season unless he can make it to January, enabling the Heat to comfortably terminate this experiment whenever they need to.

Yet you also can't forget that the most recent Shaq-Penny story that comes to mind is O'Neal famously comparing his newest teammate to Alfredo of Godfather fame. Interesting indeed.

"The difference between those three is the Godfather trilogy," Shaq said after a Heat victory in New York back in March 2005, analyzing his three famed sidekicks: Penny, Kobe and D-Wade.

"One is Fredo, who was never ready for me to hand it over to him. One is Sonny, who will do whatever it takes to be the man. And one is Michael, who, if you watch the trilogy, the Godfather hands it over to Michael. So I have no problem handing it over to Dwyane."

No one's suggesting that one KG megadeal and one provocative free-agent resurrection will make anyone forget Refgate and all the uncertainty about how the NBA will rebound from it. Yet it wouldn't surprise me at all if, for as long as Hardaway can hang with the Heat, we hear as much (or more) about the reunited couple we were never expecting as we do the "rogue, isolated criminal" who has shaken Stern like nothing ever has.

Stern's luck could be a lot worse.