"But there's not a bigger Greg Oden fan in the world than Sam Bowie," Bowie said by phone Friday.

Bowie was already rooting for Oden as "a fellow big man" drafted by the Portland Trail Blazers, but the link between them became permanent this week when Oden was unexpectedly forced to undergo microfracture surgery on his right knee, meaning that the No. 1 overall pick in the June draft likely will miss his entire rookie season. 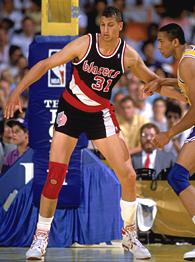 It's a fate Bowie knows painfully well. Portland infamously took Bowie with the No. 2 pick in the 1984 draft -- one spot ahead of Michael Jordan. But Bowie's leg problems, which first surfaced at Kentucky, limited the 7-footer to an average of 28 games over the next five seasons. Bowie also was forced to undergo five leg surgeries in that span, all while Air Jordan was beginning his ascent to legendary status.

"I feel terrible for Greg," Bowie said. "I've never talked to the young man, but he's always come across as very professional, very mature. Obviously, with the past history of the team and my situation, he's walked into some quicksand, shall we say. I just hope this kid gets a chance to prove all of the doubters wrong.

"When the whole thing developed with Portland [winning the lottery and getting to choose between Oden and Kevin Durant], you can imagine me reminiscing. But yesterday when I heard the news, it kind of froze me. I said to myself that Portland is right back in the situation where they were [in 1984]. I just hope that he fully recovers and turns out to be one of the best players ever."

The initial links to Bowie developed largely because of Durant's presence in the draft as a potential superstar scorer from the perimeter, immediately prompting comparisons between Portland's Oden-or-Durant decision and the choice in '84 between Bowie and Jordan. But there is a major difference in the stories.

The Blazers elected to select Bowie at No. 2 even though he had already undergone a major leg operation during his time at Kentucky, believing that he could overcome the injury and that they were covered at Jordan's position with Clyde Drexler and Jim Paxson.

But yesterday when I heard the news, it kind of froze me. I said to myself that Portland is right back in the situation where they were [in 1984].

Oden's pre-draft physical did raise some health concerns -- mainly relating to the surgery on his shooting wrist that caused him to miss the beginning of last season at Ohio State, plus the fact that his right leg is one inch longer than the left. Yet Portland general manager Kevin Pritchard insisted Thursday that Oden's knees were checked out thoroughly and looked "absolutely pristine" when he officially became a Blazer on June 28.

"The comparisons [between] Sam and Bill are very unfair," Pritchard said. "This is a one-time, traumatic, non-chronic injury."

Pritchard also told the story at Thursday's news conference that Oden emerged from surgery, along with his mother Zoe, and "probably said 'sorry' 20 times." That's another feeling Bowie knows all too well.

"For me, to this day, I feel like I want to apologize to the state of Oregon and the people of Portland, even though I didn't have any control over my physical well-being," Bowie said. "It wasn't like I had any control over it, but that's something I'll have to live with for the rest of my life. I wish I wouldn't have had those problems and we could have found out how the chips would have fallen.

"It's easy to have hindsight. No one knew [at the time of the '84 draft] that Michael was going to be the greatest to ever play the game. The Blazers had Clyde, so what they needed was a big man. They had also just traded for Kiki Vandeweghe, so looking at it they thought I was the last piece of the puzzle. If I had known that Michael was going to become the greatest player of all-time, I'd have chosen Michael over myself, too. That's hindsight."

Asked what advice he'd offer Oden if they do meet, Bowie said: "I'm not an orthopedist or anything, but the kid will heal up. The thing he's going to have to deal with is the mental aspect. First and foremost, he has to continue to believe in himself. That's the biggest adjustment, believing that you're still the same guy you were prior to the surgery. The biggest thing is keeping that self-confidence.

"Looking back, if I had to do it all over again, the first time I fractured my leg [with Portland], there was so much guilt that I really believe that I came back too soon, and maybe that's the reason why I had the recurring problems [with my legs]. I felt guilty because I was making good money, second pick in the draft, and I already missed games in college. So if there's any advice I'd tell him, besides the self-confidence part, it's to please, please, please don't give in to the pressure to come back faster than doctors' orders. And when the doctors give you a timetable, even give yourself an additional timetable."

Now 46 and a retired family man in Lexington, Bowie said he won't add to the pressure mounting on Oden by reaching out to him. But Bowie volunteered to counsel the 19-year-old if "any of his people think it would be beneficial for me to talk to him."

"I'd be elated to try to share any advice that I could," Bowie said. "But personally, I hope he's not in the frame of mind where he needs that type of therapy. I'd like to think that, where his career is concerned, this will only be a little hiccup."

As for his own rocky health history, Bowie added: "I've never been one to say, 'Why me?' Even though a lot of people would say my career was hampered or whatever, for me to say, 'Why me?' ... that wouldn't be proper." Bowie noted that even after the surgeries he had while with Portland, where he played through the '88-89 season, "I wound up playing another [six] years of pro ball [four with the Nets, two with the Lakers].

"I have a wife of 21 years and children ages 17, 11 and 8. Needless to say, the game has been very good to me. I've been retired since I left the Lakers in 1995, and to say that every day's a holiday is an understatement. As much hardship as I've had physically, and although my career didn't take off to the point [of reaching] my expectations much less the outside expectations, that's why I could never say, 'Why me?'"