VANCOUVER, British Columbia -- Steve Nash was expecting a crowd of a couple hundred Canadians last week when he opened up an environmentally friendly health club in his home province.

A couple thousand showed up instead.

Not that Nash should have been surprised by the flood of autograph seekers. The reverence he commands from his countrymen is best captured by the nickname they use for Nash at another Vancouver institution: Electronic Arts' massive games-producing campus in nearby Burnaby.

"That's short for Canadian Jesus, because he walks on water when he's up here."

Guess we were pretty lucky, then, to sneak in 10 quick questions with No. 13 between the health club's ribbon-cutting ceremony and his annual charity game over the weekend.

1. When the Suns were eliminated by the Spurs, you said that the outcome "will forever haunt us." Roughly two months later, are you feeling any differently about the series?

I'm over it until someone brings it up again. I've tried to put it out of my mind as much as possible, because it's very frustrating to go back to that series and retrace the suspensions and all the other events.

2. In each of the past three postseasons since you went back to Phoenix, your team has had to deal with various injuries and curveballs. And now comes word that Tim Donaghy, one of the referees in Game 3 of the San Antonio series, is being investigated by the FBI for betting on games. How much does that add to the Suns' disappointment?

I'm not sure how much I'm allowed to say about that right now. It's an unfortunate situation. It's a shame that something like this happened, but I believe that the game is bigger than anything. The game is strong enough to [weather] this.

3. Can you just speak generally about the Suns' recent playoff fortunes?

There have been some events that, yeah, sometimes it makes you [wonder], "How high is the mountain?" At the same time, I can point the finger at myself and my team for not overcoming some of those things. Hopefully we keep getting better as a team and I still feel like I'm still getting better individually.

4. What does Grant Hill add to the mix?

It's a really good addition for us. We are trying to [maintain] a salary structure, so to sign a veteran of that quality and experience for a veteran minimum is a great move. He's still a great player, he's a great teammate and he's going to make us older in a good way. 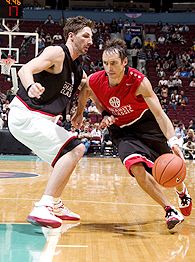 5. But you've lost Kurt Thomas from last season's team. If Hill is the only significant addition to the roster before camp opens, how much better are the Suns next season?

I think [Hill] does make us better, but we've still got a lot of work to do on the court. It's not just what it looks like on paper. We need a little more toughness, be a little more intelligent as a group. But I think, as a group, we're working toward that. I think we can keep getting smarter. We've still got a really young team that's growing.

6. How tantalizing was it to hear that Phoenix is where Kevin Garnett wants to go if he finally leaves Minnesota?

I love Kevin. I'd love to play with him [someday]. But I love my team, so I don't really think about it. We've got a great team moving forward. That's all I think about.

7. You and KG are said to have become pretty good friends in recent years. How did that happen?

Really just from playing in All-Star Games, but we haven't been able to spend that much time together. It would be overstating it to say we're super close. But he's a great person, great for the game. He's got to be one of the [all-time] top 50 guys, easy.

8. A lot of the speculation around the draft about KG's coming to Phoenix involved Amare Stoudemire. How involved were you in the organization's attempts to reassure Amare that he wasn't going to be traded?

I really think Amare's fine. I know he's been in the gym a lot getting ready for next season. He sent me a text [message] just before he went to [join] Team USA and you could tell he was pretty excited. It's going to be a lot of fun for him this summer to be healthy after what he went through [coming back from two knee surgeries].

9. Speaking of health, how are you feeling? After 11 seasons, have you given much thought to how much longer you want to play?

I've been getting a lot of "window" questions lately, but I don't think about stuff like that. It's not up to me as much as my body and how I feel, but I have no reason to believe that I won't be playing for a long time. I feel great right now.

10. You have three years left on your contract, which would take you past your 36th birthday. What happens if you don't win a championship in that time?

I'm going to try as hard as I can and hopefully that'll be good enough. If it's not good enough, what am I going to do? It's not like I'm going to go into seclusion if I never win one.