As we've recently completed a real, live Kevin Garnett trade, you will hear and read more about the trade bonus in Garnett's contract -- more commonly known as a trade kicker -- and how it factors into Minnesota's deal with Boston.

The following four-step breakdown dissects the trade-kicker specifics involved here and some of the other math variables tied to this megadeal.

But first some background: A good deal of this knowledge comes from ESPN.com capologist/Trade Machine maestro Nick Silva and our dear friend Larry Coon. Professor Coon not only has a handy knack for distilling salary-cap complexities into understandable English while running one of the best Web sites known to man -- his NBA Salary Cap FAQ -- but also is a former student and teacher at the prestigious Titan Tech ... which is more commonly known as Cal State Fullerton. 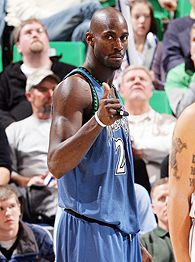 On to the breakdown:

1. Garnett only has a limited ability to waive his trade kicker. He can't just waive it to make a trade easier -- even if he wanted to -- no matter what you've heard or read. The rules state that Garnett only can waive the amount necessary to make a deal legal based on salary-cap rules.

So how would this work in real life?

Garnett's salary for next season is $22 million and the trade kicker is $6.75 million, meaning that Boston would have to accommodate $28.75 million in salary and send out at least $22.92 million in a trade if Garnett is to receive the full bonus.

The trade includes the following five Celtics for a total of $18,921,547: Al Jefferson, Theo Ratliff, Gerald Green, Sebastian Telfair and Ryan Gomes. Boston can only take back $23,751,934 in salary, meaning Garnett would have to consent to waiving nearly $5 million of his trade kicker  $4,998,066 to be exact.

Garnett's take-home trade bonus would thus be reduced to $1,751,934. But the assumption is that he would more than make that back in the long-term extension he's expected to receive from the Celtics as part of this extravaganza.

2. Garnett is one of only a handful of current players whose trade kicker causes such havoc.

The league's most recent labor agreement stipulates that a trade kicker cannot raise a player's salary above the maximum salary allowed. Yet players such as Garnett, who were signed prior to the 2005-06 season, have seen their contracts grandfathered in and are not subject to this restriction.

The problem is that a language error in the new agreement made grandfathered players like Garnett -- as well as Kobe Bryant, Dirk Nowitzki and a few others -- technically untradeable. This necessitated an amendment which stipulates that such players can be traded, with the player's full trade kicker applied to the trade and waived only in the circumstances explained in No. 1.

League officials, I'm told, preferred putting Garnett and Co. in position to collect their full trade bonus as opposed to giving them what would amount to no-trade authority. This way the teams retain more control and can always choose not to do a trade if they don't want to pay the bonus.

3. If a Garnett trade had been completed before July 1, Garnett's trade kicker would have been charged in equal amounts to Boston's payroll last season and next season at $3.375 million each. Completing the deal after July 1 requires Boston to charge the entire $6.75 million to its 2007-08 payroll.

That's one big reason why trading for Garnett after the draft became a virtual impossibility for the Phoenix Suns.

Phoenix, sources say, was Garnett's preferred destination if he had to leave the only team he has ever played for, but the Suns wanted to complete a deal without getting deeper in luxury-tax purgatory and without surrendering Amare Stoudemire.

Yet since the Suns are over the luxury-tax threshold, even after shedding Kurt Thomas' contract, they'd have to pay $13.5 million just for Garnett's trade kicker, without even accounting for his salary or the assets they'd have to give up to get KG.

While the salary-cap math in a hypothetical KG-to-Phoenix deal might have allowed Garnett to waive some of his trade bonus and thus make things a little more palatable, the most likely scenarios after July 1 would have had the Suns incurring astronomical costs to make this happen.

The Celtics, by contrast, will only stray into luxury-tax territory after adding Garnett, but sources say Celtics ownership is comfortable doing so for a player of Garnett's stature.

4. The longest extension Garnett can sign with the Celtics is a four-year deal. Garnett has two seasons left on his current contract and the total -- contract plus extension -- can't exceed six years.

Sparing you all the complicated calculations, side restrictions involved here and unknowns about where the salary cap will be in July 2009, Coon contends that the most lucrative extension Garnett could sign is a four-year package worth an estimated $116 million.