Editor's note: This column was originally published on August 9, 2007.

Reggie Miller is urged to un-retire by the Boston Celtics. Allan Houston follows up with an announcement that he's definitely un-retiring. Penny Hardaway then trumps them both by signing with the Miami Heat, setting up an unlikely reunion with (gasp) Shaquille O'Neal. 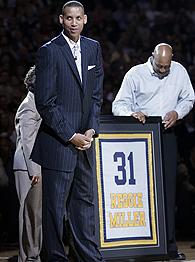 It's a string of surprises that demands an immediate explanation, since we're not exactly talking about Comeback Kids here.

Why is this all happening in one summertime burst?

The one-after-another timing of these developments might prove to be coincidence more than full-fledged trend, but it's actually not too difficult in each case to understand the appeal from the team perspective.

Two commodities that have become increasingly scarce in this league -- quality shooting and veteran know-how -- are leading executives to wonder if recent retirees like Miller have any game left. Desperate as that sounds, factoring in the bargain prices at which you can sign such famous names gives teams an easy counter to the skepticism/criticism that will always greet the acquisition of a basketball player in his late 30s -- or older -- as well as an easy out if the gamble doesn't work.

The appeal for the players really isn't hard to figure, either, even at a veteran-minimum salary. These are comeback candidates who often A) left the game without a championship or B) were forced out prematurely because of injuries or misdeeds. One last shot to go out on happier terms can be hard to resist, especially when they're so used to the intoxicating NBA lifestyle.

It doesn't hurt that even the elite teams are desperate for an extra perimeter specialist, one more proven inside presence or just a dose of playoff-tested savvy. Hardaway's return with Miami and Houston's inevitable signing before camps open in October means Miller will hardly be alone if he decides to end his own lengthy layoff by accepting the Celtics' invitation to join the new Big Three of Paul Pierce, Ray Allen and Kevin Garnett.

Who else is likely to rebound to the big time after at least one full season in NBA exile? Who from the Miller-Houston-Hardaway generation is probably gone for good? Read on.

Whereas Reggie's comeback is still a maybe, as Miller weighs whether he's really prepared to leave the comfort of TNT's "Inside The NBA" studio and drag his 42-year-old bones to Boston, Houston is younger and knows what he wants to do.

Houston has missed the past two seasons, just like Miller, but has already committed to a comeback after a season of TV work at ESPN, as reported Thursday by ESPN The Magazine's Chris Broussard.

Yet the challenge for both of these decorated marksmen would be similar. Neither can expect to walk back onto the floor and make shots just because they always have. They'll have to shed the rust quickly to adjust to the speed and athleticism all around them -- not something easy to relocate after a long layoff -- or they'll never find the rhythm to consistently make shots.

Neither, though, is struggling to attract interest.

An executive from one interested team, in Houston's case, said he's been told to operate on the assumption that "everything goes through the Knicks." In other words, Houston is expected to give New York the first crack at re-signing him after an arthritic left knee limited the sharpshooter to 70 games over two seasons before his October 2005 departure.

Yet Houston's camp, according to NBA front-office sources, has already reached out to contenders such as San Antonio and Cleveland and is open to alternative destinations.

Oakley told the Toronto Star's Doug Smith in late July that he wants to play again. Not only that, Oak is apparently serious. He claims there are a handful of teams interested, and names Dallas, Miami, Cleveland and New York as clubs that need him to address their softness issues.

Of course, Oakley also told our Canadian colleague that he's "not coming back cheap." Which might end an Oak comeback before it starts.

It's difficult to imagine any team extending Oakley more than a veteran minimum deal to return after three seasons away from the game. Yet at least one Western Conference executive doesn't doubt that Oakley could still pull off the basketball part.

"Oak has always been a good shooter," he said. "If he can still get up and down the court, I could see him filling a Kurt Thomas-type role for someone."

Kemp seemed to be progressing toward an NBA resurrection in the summer of 2006 when, in the midst of a recovery plan that saw him lose more than 50 pounds, he pleaded guilty to a misdemeanor drug charge in Houston. That prevented the slimmed-down Kemp from receiving any training-camp invites last fall.

This fall? Kemp has reportedly kept the weight off and, according to agent Tony Dutt, has been approached by a couple of unnamed teams that are thinking about bringing him to camp.

The YouTube faithful who never get tired of replaying Kemp's unforgettable array of dunks can only hope.

Massenburg was last seen on San Antonio's bench as part of a championship team in 2005, but the veteran bruiser apparently has a new sign-off in mind that would be more satisfying. Tied for the league record with Chucky Brown and Jim Jackson for playing with 12 different teams, Massenburg has been putting out some feelers to see if he can get one more job and break the record, according to NBA front-office sources.

Van Horn could get work if he wanted it faster than anyone on this list. Denver had strong interest last season and Boston is a natural suitor now given that the Celtics are looking for shooters to ease the perimeter burden on Allen ... and given that Van Horn is 10 years younger than Miller.

But Van Horn has gone underground since deciding to spend last season with his family at their Colorado hideaway. Even a few folks close to Van Horn during his most recent stint in Dallas have struggled to reach him.

It's believed that Van Horn hasn't ruled out a comeback in the future, given that he only played nine NBA seasons. Yet one source, reminding that Van Horn was turned off big-time after being forced to shuffle through four cities in the final five of those seasons, puts the odds on his return at "75-25 against."

Davis could certainly get a job if he wanted one. That was the case throughout last season and again this offseason.

Yet it appears as though he plans to stay retired, although Davis did concede to ESPN.com last December that one more shot at an elusive ring "would be the only thing that would get me to think about it."

Davis' agent Bill Duffy said Thursday: "I think Antonio is very content in parenthood. He's had several opportunities [to come back] in the last couple years with Chicago and Dallas. But I think he's a full-time father now."

Woods is the only kid in this comeback discussion, far younger than anyone else here. But he's included for a couple reasons.

1. He's more likely than most to make it back to the league because of his age, even though he recently signed with perennial Greek club power Olympiakos. Woods has apparently shed some weight since a brief stint in the D-League last season and worked out for some NBA and European teams in Las Vegas last month during summer-league play.

2. Woods would come under closer-than-ever scrutiny if he does make it back to the NBA because of the unavoidable tie-in to Atlanta Falcons quarterback Michael Vick. Woods was released by Portland after pleading guilty to animal-abuse charges stemming from accusations in 2004 that he was pitting pit bulls against each other in dog fights.

Pippen lobbied contenders to give him a comeback look during All-Star Weekend in Las Vegas in February, but couldn't tempt anyone. Word is he's now pushing for a coaching or front-office opportunity, having announced on a recent NBA goodwill mission to China that "I am not looking forward" to playing again.

Kukoc was willing to join only the Bucks or the Bulls last season, which would have enabled him to commute from his home in Northern Illinois. But agent Herb Rudoy shared Thursday that Kukoc is no longer physically able to play because of persistent hip trouble.

"I had calls all throughout the season [from various teams]," Rudoy said. "There's just no way that he's able to play basketball."

It's widely assumed that knee trouble ended Van Exel's career after one final, unsuccessful ring chase with the Spurs. Van Exel was indeed plagued by various knee problems in the later stages of his career, but the bigger issue at the end was actually an elbow injury that messed with his shot. He apparently decided against playing on because the elbow, more than his knees, wouldn't allow him to live up to his reputation for clutch shot-making. He'd certainly still be getting offers if healthy.

Sprewell's name hasn't been in the news much since late in the 2005-06 season, when ESPN.com's Chris Sheridan went to Sprewell's house in Wisconsin to ask him directly about his future plans and got thrown off the property. Our first wave of attempts to find anyone who has spoken to Spree more recently proved a lot less dramatic but similarly unsuccessful.

Boston chasing Spree is a natural now that they've traded for his pal Garnett, but at least one of Spree's former teammates doesn't offer the Celtics (or anyone else) much hope. "I don't think he's returning [NBA] calls these days," he said.