The rank-and-file basketball union will never fight David Stern to the ends of the earth on a minimum age for the draft, so the commissioner ought to make it a deal breaker. The NBA needs to protect its distilled and dilapidated product, the way the NFL has done without the teeny-bops trying to break into its sport. LeBron James is a once-in-a-generation phenomenon, but Kwame Brown and DeSagana Diop are too often clown princes dragging down the back end. 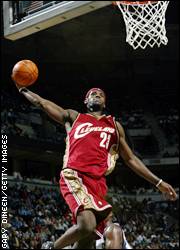 Stern shouldn't consider signing a new collective bargaining agreement with the players association until he's instituted the 20-year-old age benchmark, leaving the league for whom it belongs: Grown-ups and men. Do you think that veteran NBA players, who are constantly losing jobs to 18-year-old kids sitting at the end of benches, will let Billy Hunter turn that rule into a deal breaker? There's no shot.

All you need to do is read one of the most important basketball books ever written, Ian O'Connor's "The Jump: Sebastian Telfair and the High Stakes Business of High School Ball," and you'll understand the pressing need to get the sneaker companies and agents out of high school basketball, the need to end a most damaging trend to the game. The 20-and-under rule wouldn't completely clean up the system, but it would relieve some of the pressure on amateur basketball, an entity suffering badly from third-parties trying to cut themselves into those first-round guaranteed contracts that NBA GMs can't stop giving out to undeserving kids.

Did James need college? Of course not. He could've played in the NBA as a high school junior. Yet, remember something: Kobe Bryant and Kevin Garnett didn't walk into the NBA and turn it upside down. Do we suffer the loss of impact of the rarified superstar with a 20-and-under rule? On some level, yes, but the good that will come out of it  the end of stockpiling immature, goofy kids on benches, and the beginning of better prepared prospects joining rosters  will have a far more positive and lasting legacy on the game.

Telfair made the leap out of Brooklyn's Coney Island, a jagged journey at 5-foot-11 to an $18 million adidas sneaker contract and 2004 draft lottery selection of the Portland Trail Blazers. Had he gone to Rick Pitino and Louisville for a year or two, there was always the chance that he would've been exposed as a suspect shooter, as something less than what the Blazers believe he'll someday be: the face of a franchise. Telfair was part of a high school class in 2004 that swallowed up eight of the top 19 picks in the draft, pushing the NCAA college player of the year, Jameer Nelson, to No. 20.

Even so, Telfair has developed into the Blazers' starting point guard, logging major minutes and showing signs of brilliance at the three-quarters mark of his rookie season. At sub-six foot, he's made a far smoother transition to the NBA than most expected. Telfair's story turned out to be no cautionary tale.

Here's the thing: Do we hold up an entire system because we won't allow kids to fool scouts into drafting on their potential, instead of their productivity? As O'Connor's "The Jump" showed, there is a generation of elite players who see going to college as failure, that your standing in the basketball community is a pass/fail proposition based on getting into the draft without ever living in a dormitory room.

It shouldn't be the NBA's responsibility to protect the slight percentage of ready-made kids who are candidates for the prom-to-the-pros leap, but rather protect the greater good of a sport in crisis, the coming to a roost of an AAU and And1 generation.

Right now, the NBA is an unsightly mess. No one is drafting kids on the soundness of fundamentals, but rather on the fool's gold of athleticism and promise. No one is saying that kids must be forced to go to college to play ball, because that makes no sense to send kids there who have little or no interest in the education. What needs to happen is a legitimate minor league operation in the NBA, an upgrade on the NBDL.

When the NBDL is cutting undrafted high school prospects like Lenny Cooke so it can keep a thirtysomething journeyman to pad a coach's resume, then the league is failing in its mission. What's more, there's no use shipping high school graduates off to Europe because the NBA won't take them until they're 20. That'll inspire even more drifting, lost souls in the system. We need a legitimate feeder system in the NBA, just like baseball. The NBA can create co-ops in the D-League, where players can take classes and get work done toward college degrees. The basketball minors need to teach kids that basketball is a job, not an audition for an And1 mix tape. And that's hard for them to understand when they're coming out of a kiss-ass amateur basketball culture where they're infected with a terrible sense of entitlement.

It sounds like union chief Billy Hunter is relenting on the issue, and it would be a wise choice for him. If the players association wants a fight, this is the wrong one. This rule will spare jobs in the NBA for deserving players, and spare the game an erosion that is killing it. The next LeBron James will come along about as often as the next Michael Jordan did: Once in a generation. As the NBA waits for the rare savior, these kids storming the gates threaten to leave a league that probably isn't worth saving.

Adrian Wojnarowski is a sports columnist for The Record (N.J.) and a regular contributor to ESPN.com. He can be reached at ESPNWoj8@aol.com. His book, The Miracle Of St. Anthony: A Season with Coach Bob Hurley And Basketball's Most Improbable Dynasty, is available nationwide.