Along the way this season, the Nets hired the voice of the Knicks, Marv Albert, for next season. Then the longtime choreographer of the Knick City Dancers. They're still planning to move into the borough of Brooklyn, where owner Bruce Ratner is pretending to love basketball so people will believe he's interested in something other than that real-estate score that will come with a new arena. 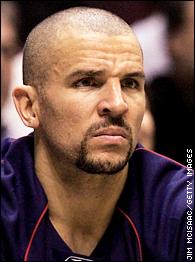 No, the Nets won't be making a run deep into the playoffs, but it sure is still entertaining watching Jason Kidd and Vince Carter auditioning for the And 1 Mix Tape Tour on the fast break.

Before the season, the Knicks were going to take New York back again. They were so sure of it. The Nets had traded Kenyon Martin for draft picks; Kidd wanted out; and Knicks president Isiah Thomas was preaching a plan to make Madison Square Garden matter again. Now, Thomas simply stands in the tunnel between the locker room and the court, arms folded, watching this mess unfold night after night.

So, the Knicks came staggering into the Meadowlands on Thursday night with an embarrassment of a season, out of the playoff chase in the worst division the NBA has seen in years, out of the minds of New Yorkers, but nowhere near out of the shadow of the retooled and resilient Nets like they thought they would be. If the Nets make the playoffs in a season when they lost Martin and Kerry Kittles for draft picks, and ultimately Richard Jefferson to a broken wrist, they ought to be thrilled.

True to form, the Knicks folded at the Meadowlands, 110-98 to the Nets, who move closer behind Philadelphia for the eighth seed in the East.

Just a year ago, the Knicks and Nets were a playoff series the market was dying to see; now, it's just a fizzle of a final regular-season meeting.

Now, March Madness has ended, the Yankees and Red Sox finished a harrowing three-game opening series in the Bronx where Derek Jeter was cracked in the helmet and Mariano Rivera was shelled  and maybe metropolitan New York turns a curious eye Thursday night to the Meadowlands, where the NBA is dying a sad, slow death in the Jersey swamps.

Unless the Nets, who trail the 76ers by one game, grab that last playoff spot, only 16th-seeded Fairleigh Dickinson and its valiant loss to Illinois will be recorded as a postseason basketball appearance in the region. It hasn't been pretty in the pros or on campus in metropolitan New York, and it only grew worse Tuesday night when the Knicks were booed off the Garden floor during Reggie Miller's farewell game. For the first time in these final weeks, it looked as though the Knicks quit on a game.

Now, the Knicks are trying to run Allan Houston out of his scholarship, praying he'll take the remaining years on his $100 million full ride and call it a career with his gimpy knee. And that could be the biggest move Thomas has to make to his roster this summer because he's probably out of takers for the talent on his team.

Poor interim coach Herb Williams never had a shot with these Knicks, a collection of lifetime underachievers and AAU spare parts. Thomas had a grace period to start cleaning up the Scott Layden mess, but it's over. He's on the clock now. Though everyone in New York wanted so badly to see Thomas bring a coherent, reasoned plan for restoration to replace the cardboard cutout of Layden, fans are growing tired of the "trust me, I know what I'm doing" platform Thomas has offered.

Isiah would love to make a splash, but with the salary cap, he won't be able to do so. He keeps reshuffling pedestrian player for pedestrian player. When it comes to hiring a coach, Thomas will do something unconventional. He'll do something creative. He'll have lunch with Phil Jackson, who ultimately will not take a job that leaves him with no chance at breaking Red Auerbach's record of nine NBA championships. Isiah will probably get a whisper to Larry Brown. He'll recruit a big campus name or two. In the end, the question will be this: Will Isiah hire a bigger, bolder presence than his own to take the Garden spotlight?

The Nets could have a far more productive summer, where they'll watch rookie Nenad Krstic keep developing into a front-line power forward, and where it could cost them more than they would've once believed to re-sign free agent forward Brian Scalabrine (who keeps threatening to work himself into one of the NBA's best utility men). The Nets have draft picks, a deft scouting eye in general manager Ed Stefanski and the big-picture, creative trade mind of Rod Thorn.

Through it all, the Nets are still a joy to watch. Mostly, it's Kidd and Carter playing a two-man game, but there are far worse shows in the NBA. They'll throw the ball up in the swamp Thursday night against the Knicks, and there's no mistaking the magnitude of the game across the Hudson River: It's easily the biggest since Fairleigh Dickinson had to beat Wagner in the Northeast Conference championship game to reach the NCAA Tournament a month ago.

Let's face it: It has been that kind of season of bad basketball in New York.