It started with too much talk out of Pat Riley about missing coaching, too much longing, too much to believe the Miami Heat president could sit any longer in the shadows with Shaq on his side. Jeff Van Gundy forever feared this day would come for his older brother, Stan, and it looks like a matter of time now until Riley takes his old job back and makes himself the Heat coach.

"So many things about it," Riley said late last season to Dave Hyde of the Sun-Sentinel, when asked about what he missed about coaching. "I think the one thing that was best about it, through the good times, bad times, easy practices, hard practices, great wins, tough losses -- the best thing was, at the very end, there was a common thread that regardless of what happened there were three words: Bring it in. 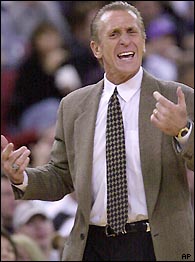 "You'd end everything that way: Bring it in. Everyone would bring in hands together and everything was OK. It's what the game was about, the spirit of game. If you're upset, angry, played poorly, whatever, there always was that ritual that made it all worthwhile."

Bring it in, yes, but before the Heat do, Riley seems determined to push Stan Van Gundy out of the huddle. After talking louder and louder about missing his old job, and after the Heat lost Games 6 and 7 of the Eastern Conference Finals, Riley promised to take an even more "active participation" on the floor next season.

Riley talked so much, and now, with the speculation in South Florida gradually transforming to inevitability, there's something far more damning for Van Gundy out of his boss: Silence, in the form of half-hearted denials, such as the one Riley delivered through a team spokesman on Thursday: "Stan is our head coach. We don't plan on making a change."

It's over, and Van Gundy knows it. Riley has so severely damaged Van Gundy's credibility within the locker room, how can he even bring him back under these circumstances now? "Right now, I'm coach of the Miami Heat," Van Gundy said this week, as though it was a temp job.

Some suspected this would all play out in such a way once Riley traded for Shaquille O'Neal a year ago. And here it is, playing out in living color. Riley is close to taking back the sidelines, taking back the bright lights and the chance to win that NBA championship with Shaq and Dwyane Wade.

Riley needs to stop framing this as some noble return to his passion, and tell the truth. His ego could never stay in the background and let Van Gundy get the shot at bringing that championship parade to the shores of Biscayne Bay.

Suddenly, coaching the Heat is a glamour job again, and Riley's ego would never let him sit that out. If Riley will want to insist this was a hard choice based purely on the best chance for a championship, or finding the best coach for the job, ancient NBA history backs him. It's just that modern history doesn't. Across the past two seasons, almost no one in the league has coached better than Stan Van Gundy. I'll give you Larry Brown, but no one else.

What the Heat had was the rarest of strong management structures, under which the chain of command set everything in motion for a finely tuned winning machine. If this was truly about winning it all, Riley would've understood that all his Heat needed in the playoffs was to stay healthy, not a new coach.

The NBA is never about fair, but about what's right. Of course, it isn't fair that Van Gundy could lose his job. More than that, it isn't the right thing for the franchise. Yet, Riley will sell it, because there's no better salesman in the history of the league.

In his self-deprecating way, Van Gundy described the Heat coaching progression from Riley to himself: "Like going from Larry Bird to a CBA player." If that was true when Riley gave him a young, rudderless team on the eve of the 2003-04 season, a core of young players that would lose their first seven games of the year, it would no longer be the case at season's end when Van Gundy had completely changed the Heat's style and system on the fly, winning 42 regular-season games, beating the Hornets in the first round of the playoffs and taking the Pacers to an improbable seven-game struggle.

Yes, Shaq changed everything for the Heat last season, but even with him at half-speed in these playoffs, Van Gundy still had the Heat on the way to the NBA Finals. What stopped him was the injury to Wade. That's it. If Wade didn't go down, it was Spurs-Heat in the Finals and you wonder then if Riley would've had the stomach for what appears to be in motion now.

In the end, Riley will have the backing of Shaq, who always made sure to talk about coming to Miami to play for Riley, the president, instead of Van Gundy, the coach. Now, there's no turning back. Van Gundy is undermined in Miami. Riley has undercut him.

If Riley had just fired him a few weeks ago, Van Gundy could've been a candidate for one of the jobs open in the league. After 11 years of loyal service, Riley could've done him a favor, spared everyone this saga and let Van Gundy get on with his coaching career.

Stan Van Gundy will be a most wanted man in the NBA, but the chances of his getting his hands on another championship contender is a long shot.

There are too few of them, and that's the reason Riley looks like he wants back in Miami. The pressure on Riley would be immense: Anything short of a championship season would be failure, and would do far more damage to his coaching legacy, than winning his fifth title would do to enhance it.

Bring it in, Riley yearns to say again. Right. This wouldn't be about coaching in the dark, sweaty corners of practice, but preening in the bright lights of game night. Coaching the Heat is a glamour job again, and surprise, surprise: The glamour coach wants back in, whatever the cost.

Adrian Wojnarowski is a sports columnist for The Record (N.J.) and a regular contributor to ESPN.com. He can be reached at ESPNWoj10@aol.com. His best-selling book "The Miracle Of St. Anthony: A Season with Coach Bob Hurley And Basketball's Most Improbable Dynasty" can be purchased in bookstores nationwide and on Amazon.com.