The time has come for the NBA to have its own Hall of Fame.

The nonelection of Dominique Wilkins, the ninth all-time leading scorer, and Joe Dumars, only the second player to win a championship as both a player and an executive, in their first year of eligibility into the Basketball Hall of Fame is laughable.

It's nice that Connecticut coach Jim Calhoun and Syracuse's Jim Boeheim, with more than 1,400 victories between them in college basketball, will enter the Hall of Fame this September in Springfield, Mass., along with former NBA coach Hubie Brown and two others. But there is no denying what Wilkins and Dumars have accomplished at the very highest level of the game. And besides Wilkins and Dumars, such NBA greats as Bernard King, Maurice Cheeks, Adrian Dantley, Dennis Johnson and Chet Walker were left out. Induction required 18 of 24 votes from the Hall of Fame's honors committee. 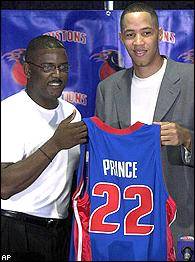 "It's pretty shocking," Scottie Pippen said Sunday morning on ESPN's NBA Matchup show. "For me, Dominique was one of the toughest opponents I faced.

"His offensive numbers speak for themselves. Not to be a part of the Hall of Fame in his first year of eligibility is shocking."

Commissioner David Stern should be embarrassed by the voting. In fact, the omission of any NBA players makes you wonder why the NBA honoring isn't its own, anyway.

In the last eight years, the Basketball Hall of Fame has selected only nine former NBA players while selecting 16 college coaches and a number of other, less prominent basketball figures, many of whom you've probably never heard of, including international players, coaches from all levels and women's players. Obviously, the standards for these people are far different than for NBA players.

For that reason, many don't take the Hall seriously. In fact, in prestige it ranks far below the Baseball Hall of Fame in Cooperstown. When was the last time you heard a long and heated sports-talk radio debate over who should be in Basketball Hall of Fame? Never?

The Basketball Hall of Fame just doesn't stoke the fans, even the ones who "love this game." Solving this problem should be a priority for Stern. If the NBA can pour millions into the WNBA and NBDL, it should get on this. Stern could only help his legacy, and he could leave behind something fans would cherish.

The NBA should take a cue from baseball, whose hall admits major league ballplayers almost exclusively (along with a few major league managers and others). The league should make it clear what the guidelines are, who is eligible and who makes the selections. That would tend to prevent the selections from being merely a popularity contest and give the fans something to debate. As it is, it's hard to debate about the deliberations of an obscure committee that is making apples and oranges choices between folks such as Calhoun and Wilkins.

It wouldn't be that hard to get this thing started. First, the NBA, which adopted its name in 1949 after the merger of the National Basketball League and the Basketball Association of America, has to pick a place to put it. We know basketball was invented in Springfield, but not the NBA. So it would have to be in one of the original NBA cities.

In baseball's voting, a writer has to cover the sport for 10 consecutive years before being allowed to vote for the Hall of Fame. That's credibility.

Hence, NBA writers wouldn't vote for 10 years. During the first 10 years of the new NBA Hall of Fame, the league would induct five players a year from its list of the 50 greatest players, which it announced in 1996 to celebrate the 50th anniversary of the league.

After that, writers would vote on players who have been retired five years.

If the Basketball Hall of Fame still wanted to honor NBA players, that would be fine. Many star athletes are in more than one hall.

But the NBA, with more than enough money to make this new Hall a showplace, needs to take care of its legacy and its players. Leaving such an important task in the hands of others has proven once again to be a huge mistake.

Rob Parker is a sports columnist for The Detroit News.