The Houston Rockets will announce Thursday that they've signed three-time All-Star center Yao Ming to a five-year extension, thereby securing his services through the 2010-11 season, a source close to the negotiations confirmed early Wednesday morning. 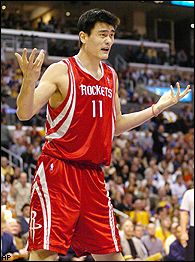 The story was first reported by KRIV-TV in Houston. The Associated Press reported Wednesday that Rockets owner Leslie Alexander and Yao would participate in a conference call planned for Thursday.

That this comes without drama or shock value -- not even for the Lakers -- is further proof that Yao simply isn't cutting it as your standard-issue NBA superstar. Under the next collective bargaining agreement, the value of the contract, which doesn't kick in until next season, will be 25 percent of whatever the salary cap is. Estimates have the deal starting at $12.5 million. What the Rockets have to wonder is whether he'll ever start acting like someone pulling down that kind of coin.

Didn't he read the manual? Doesn't he know this was his chance to hold the franchise hostage and make sure everyone in Dubya's stomping grounds danced to Yao's xiao*? To induce GMs around the league to prostrate themselves before his size 18s and shower him with gifts and expound on how magnificent he would look in their uniforms? (Heck, even Tim Duncan went the sampler route.)

To inspire media and fans to speculate and chatter and raise a general ruckus about where he should go and why? (Several sources say Lakers rising exec Jim Buss -- son of owner Dr. Jerry Buss -- thought he could lure Yao to L.A. but is now targeting LeBron James.)

Yao could've been the center of attention for at least a month, if not an entire year, had he played out his option -- and, instead, he does this. Quietly negotiates a max extension. Quietly arranges to call from China to make the announcement. Quietly hitches his wagon to a franchise and a market that, quite frankly, are not big enough to fully exploit his worldwide drawing power.

I understand now why his rookie-year teammates celebrated when he finally unleashed his first post-dunk, T-drawing primal scream. The dude simply refuses to see that being focused on winning and making his teammates better and honoring his country and respecting his elders and trying, despite his wealth and fame and privilege, to embody that whole Rudyard Kipling poem thing is just -- well, damn it, it's just not the NBA way.

Here's how it's done: Keep a checklist of grievances and see this as the perfect time for full-bore payback. Poke fun at those who tagged him a bust before his first NBA game. Steal the spotlight from those who insinuated his All-Star starts are bogus because he comes from a country of 1.3 billion people. (As if that's something he should be sorry for, especially considering a billion are not believed to have Internet access.) Drop hints about how honored he'd be to follow in the purple-and-gold pivots of Kareem, Wilt and Shaq. That might've even induced Phil Jackson to say how much better suited Yao is than the Diesel for the triangle offense. Or how much New York reminds him of his native Shanghai. Or how he might just have to leave the league entirely if the referees don't start cutting him a little more slack.

Re-signing without milking the moment for all its worth -- to him, at everyone else's expense -- wasn't his only offseason violation. Rather than delaying his ankle surgery, thereby allowing him to miss part or all of training camp and provide himself a built-in excuse for playing his way into shape, he had it done early in the summer. Then he hired a personal trainer to keep working on his upper body while his ankle healed. Then he bought a $3,000 portable ice-electric stimulation contraption so he could still meet his Basketball Without Borders obligations in Beijing in mid-July while treating his ankle in his downtime.

How Yao reached his decision to stay in Houston is almost as bad. First he weighed if any place could give him a better chance of winning a championship. Then he considered how much he enjoyed playing last season with newly acquired Tracy McGrady. Then he remembered how Houston, its franchise and its people, embraced him as much for who he is as who they hope he will be. How GM Carroll Dawson announced Yao was going to be the No. 1 pick and never wavered in the face of withering skepticism. How the team, from the 12th man to the coaching staff, has been remodeled to exploit his strengths and compensate for his weaknesses.

Yao even concluded that for all his wisecracks about the traffic and sprawl and cowpie-kickin' attitude, Houston really isn't all that bad as an adopted home.

All of which he may or may not mention Thursday. If he feels in any way he might be overstating his place in the Rockets' universe -- as he sees it -- he'll stick to thanking the franchise for believing in him and promising to do his best to live up to its commitment and expectations and then throw in a self-deprecating crack. Something about looking like coach Jeff Van Gundy in six years. Or having enough time now to see Shaq retire. Or having the money to build a private freeway to and from the Toyota Center.

The guy just doesn't get it. It's quite a burden for the rest of us to carry, but let's hope he never does.

Ric Bucher covers the NBA for ESPN The Magazine and collaborated with Rockets center Yao Ming on "Yao: A Life in Two Worlds."