On the first day of free agency this summer, Rick Brunson called his agent, Leon Rose.

"I haven't heard anything," Rose said, proving that he is Brunson's friend as well as an advisor. Somebody else might've shouted: "You're Rick Brunson, for God's sake! I've got LeBron James, Allen Iverson, Eddie Jones and Rip Hamilton as clients! I've got to find jobs for Aaron McKie, Dajuan Wagner and DeSagana Diop! You've been a free agent eight straight summers and no one's ever called! How did you get past my secretary, anyway?"

"I'm not calling about that," Brunson said. "I just wanted to see how you were doing."

Three hours later, Rose called him back. "You won't believe who called," he said.

And that's how Brunson's reign as the King of Non-Guaranteed Contracts ended. After eight offseasons of watching who signed where to decide which training-camp invitation he should pursue, Brunson made the transaction wire himself, signing a one-year, $1 million deal with the Sonics. Fully guaranteed.

"We knew we were the first," Sonics general manager Rick Sund said. "It was a selling point. We also wanted him to feel the belief we had in him."

Brunson going to Seattle amounted to a keypad beep amid the air horns of free-agent signings, but for anyone who has doggedly clung to a far-fetched dream -- in other words, most of us -- it was Gabriel channeling Miles Davis in Carnegie Hall. Translation: a loud, triumphant, miraculously blessed sound. Dorothy ain't the only one who took a circuitous route to the Emerald City. Brunson went undrafted out of Temple, played in Australia and the CBA his first two years as a pro, got cut by two different teams (Magic and Knicks) in the same preseason (1997) and has been waived six times in all. The Sonics are his eighth team in a nine-year career, putting him one year away from his personal goal of playing 10 years in the NBA. The list of lottery picks or vastly more talented players who haven't achieved that would reach the top of the Space Needle. Roy Tarpley. Lloyd Daniels. Todd Day. Carlos Rogers. Terry DeHere. Big Country Reeves, Shawn Respert, Ed O'Bannon and Mario Bennett, all drafted the year Brunson wasn't, didn't come close.

None of that, though, had Brunson throwing a celebratory barbecue at his Cherry Hill, N.J., home with Rose and his family the last weekend in July. The Sonics' offer arrived right after Brunson completed a 400-hour work-study program as a social worker with troubled teens in Philadelphia, thereby fulfilling the last major requirement for his bachelor's degree from Temple.

"I never really cared about celebrating my contract," Brunson said. "Playing basketball is easy. But going to school is not for everybody." 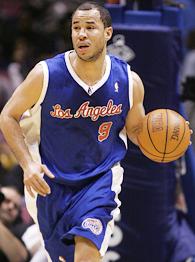 He is not likely to inspire as many people to go into social work as he has to chase an NBA career. Every playground semi-legend who has seen Brunson play has thought, "If that dude can play in the NBA, then I know I can." They are both right and dead wrong. Listed as 6-foot-4 and 205 pounds, he's not quick, has miniscule ups and has to have his feet set to make a 3. He has a decent handle, but he's not going to single-handedly break a press or collapse a defense. He's a defensive hound, but most guards can get a step on him at will. There are hundreds of guys playing pick-up games every day with greater physical gifts.

But they've got a better chance of being LeBron than Brunson. Because NBA teams aren't made of the 12 most talented players a GM can find. They're made of 12 players, ideally, who can work together for an entire 82-game season. Brunson is on the brink of reaching his goal because it didn't come with any caveats, like, "I want to play 10 years and average X points or X assists or make X dollars." He wanted to be in the NBA for 10 years, period.

So he developed an ego to fit every occasion. He became so adept at finding his way onto a team in October that four out of the last five years the editors of the official NBA Register included him and left the team name blank.

"I've never been embarrassed about being cut and I never went into a situation thinking I was better than anybody," he says. "I've seen too many guys who use the money as a crutch. If they have a bad day, it's 'The coach doesn't like me' or 'All I need is a good half of a season and I can get paid.' Every time I stepped on the court, I wasn't just playing for one team, I was performing for 29 other teams as well. Everyone has a role, but not everyone can play. I understood that. I knew I could play in the league, but I knew I had value as a practice player, too."

Everyone, though, itches to show what they can do, and prove they're better than advertised. Brunson's advice: Get your ya-yas out in the offseason pick-up runs. NBA reserves are best seen, on time and always in the right place, attempting to stick with the program. They aren't called on to win games as much as they're looked to not to lose them. They're expected to play all-out but under control. When Brunson was lucky enough to make a roster, he might have gone days or weeks with no burn but would have to stay physically and mentally in shape and then play mistake-free or efficiently in, say, a four-minute stint. Playing or not, he knew he'd be yelled at, so the coach could get his message across to his stars without risk of alienating them.

"I have a saying: Never exhale," Brunson said. "Once you get comfortable, you're on your way out."

His chance to be more than a practice player finally came last season, thanks to injuries to Clippers guards Marko Jaric and No. 4 pick Shaun Livingston. Brunson made 80 appearances and 39 starts and proved he could play significant minutes and hold a team together. He passed, shot and defended as the game plan dictated without complaint or hesitation. There were plenty of times he didn't make a play, but rarely did he try to make the wrong one. Most coaches can live with that, especially from their third-string point guard. He averaged 5.1 assists and 1.6 turnovers and made enough 3s (36 percent) to keep teams honest.

"His assists per minutes played is one of the best in the league," Sund said. "What we like is that there is no unknown with him. You know what you're getting. He knows who he is."

None of that was enough for the Clippers. Rather than snap up the Sonics' offer, Brunson demonstrated his gratitude by giving the Clippers a chance to keep him. They didn't even try as part of an overhaul that has upgraded their talent at the expense of chemistry. Maybe coach Mike Dunleavy can find enough shots for Sam Cassell, Cuttino Mobley, Corey Maggette and Elton Brand without derailing the development of Shaun Livingston and Chris Kaman -- and maybe Kofi Annan and George Dubya will bunk down in a timeshare on the French Riviera this winter. Peace prizes all around, if that happens.

"I wish I was there just to see how that's going to work," Brunson said, smiling.

The Clippers' snub was one more test of his philosophy of trying for the best and preparing for the worst, a mind-set he credits Temple coach John Chaney for cultivating. His mom, Nancy Linton, meanwhile, demonstrated what perseverance can do. Linton raised five kids on her own in the projects of Syracuse, N.Y. The family was eligible for welfare but she refused, choosing to work as an operator for BlueCross BlueShield, a job she still holds today.

"That stuck with me," Brunson said.

Hence, the degree, which always is a nice touch on a coaching resume, particularly if it was earned working with troubled teenagers. He believes he could stretch his playing career to a full dozen seasons, but he's already working toward his next job -- coaching the Owls.

"They know my intentions," he said.

For now, he can prepare for the season imagining Ray Allen on one wing and Rashard Lewis on the other. He can look at the schedule and plan for his family -- wife Sandra, son Jalen (9) and daughter Erica (4) -- to come out to Seattle and know when he'll be on the East Coast to see them. What he can't do, he says, is think he's assured of anything other than a paycheck.

"My first thought was I have to work even harder to prove I haven't relaxed," Brunson said.

As Rose said upon hearing Brunson would get his just public due on Labor Day weekend: "Nothing could be more appropriate."

Ric Bucher covers the NBA for ESPN The Magazine and collaborated with Rockets center Yao Ming on "Yao: A Life in Two Worlds."