Editor's note: We asked Henry Abbott of TrueHoop to write the ultimate blog entry on the NBA's new basketball. From launch to tip-off, here's a roundup of info and opinion on the controversial new ball.

Countdown and liftoff with, curiously, an icon of plane crashes

During the playoffs of last spring, the NBA did everything it possibly could to draw attention to Spalding's latest product.

Mainly, it did that by dragging around a mysterious black box, getting it on TV as much as possible, and trying to get people to guess what it was. 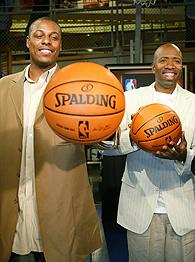 In TrueHoop's reader comments, "Smack Adams" took a guess: "Since NBA.com touts the contents of the box as 'sure to change the way you see the game,' I'm guessing it's reams and reams of blotter acid."

But it wasn't all that mysterious. Well before that black box was officially opened on June 28, I got an e-mail with a link to an online photo of the new ball. I blogged about it and, well, I don't think anyone was surprised. Especially as the box was the shape and size of a basketball, and the "B" in NBA stands for...

Back then the NBA still enjoyed the notion that a big bundle of fanfare surrounding the new ball was good for the league, so it made a big stink of the unveiling. David Stern, Stu Jackson, Kenny "the Jet" Smith and even Paul Pierce were on hand. Everyone said all kinds of nice things, and executives from the NBA and Spalding no doubt went to bed that night dreaming that every sports section in the world would include extensive discussion of the new NBA ball. (Ahh, but one must always be oh so specific with one's wishes.)

In an ominous bit of foreshadowing, the online press release shows a cute little animated graphic of water drip, drip, dripping on that ball. The caption reads: "Moisture management material provides superior grip and feel throughout the course of a game."

J.E. Skeets was one of the first bloggers to get his mitts on the new ball (allegedly the balls weren't going to be in wide release until Halloween, but they seem to be everywhere now). In New York for the draft in June, Skeets plucked one off the shelf in the NBA store and found the PR-friendly staff eager to put in the good word for the work of the Spalding technicians. Wrote Skeets:

It's a nice ball and has a crazy super grip to it. I could palm the thing easily. Funny part: I started dribbling it around the store a bit, when all of a sudden some employee got pissed. He was all like, There are only 61 of these in the world, and they cost over $200 bucks," and blah-blah-blah. I just laughed at him and said, "It's a ball dude. Jeesh."

At that point, it seemed like the new ball might already be rolling fast down the water-park slide of success, buoyed in the rushing waters of NBA fame and big-dollar backing (Spalding reportedly pays the NBA $125 million and provides countless "official" balls over eight years), toward the wave pool of big revenues. But any lifeguard can tell you: When you hear thunder, those waters get dangerous in a hurry, and then it's everybody out of the pool.

Shaquille O'Neal is one of the few NBA players who can make thunder. You can watch him on video saying again and again that the ball is terrible, and whoever was responsible should lose not only his job but also his college degree:

Feels like one of those cheap balls that you buy at the toy store, indoor-outdoor balls. I look for shooting percentages to be way down and turnovers to be way up, because when the ball gets wet you can't really control it. Whoever did that needs to be fired. It was terrible, a terrible decision. Awful. I might get fined for saying that, but so what?

A flood of other players -- almost certainly the majority of NBA players interviewed over the ensuing week -- echoed O'Neal's sentiments as they arrived at training camp and played around with their new balls. Raja Bell, for instance, says "it sucks."

His teammate Steve Nash, reigning MVP, didn't really mince words either, as reported by Paul Coro in the Arizona Republic:

You make moves in traffic and the ball gets stuck in parts of your hands and your wrist where normally it slides and you get it back the way you want it. Now, even if it's in your hand, it sticks and you can't get rid of it sometimes. It's a really difficult ball to play with. 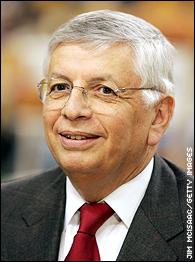 The NBA quickly trotted out VP Stu Jackson to say, essentially, that the new ball was really fantastic and there was no need for hand-wringing. (After his announcement, apparently unreassured by his own reassuring platitudes, Jackson reportedly made an unannounced foray to Nets' training camp to see for himself just how slippery that ball really got.) Media day also coincided with lots of goofy studio photography of players and the ball they loved to hate. It seemed the PR whitewash was on.

Then Jackson's boss engaged in just a little bit of hand-wringing. In the second week of October, as ball-gate raged and seemingly every NBA player who strayed near a microphone went out of his way to condemn the new ball, David Stern blinked. And David Stern never blinks.

Ian Whittell reported at the time:

Speaking to reporters in Paris before Sunday's exhibition game between the San Antonio Spurs and Maccabi Tel-Aviv, Stern conceded for the first time that reverting to the old leather ball is a possibility if the rigorous testing he has just ordered validates the widespread complaints about the ball -- particularly its tendency to become slippery when wet.

(Stern's second gaffe, at the same press conference -- he was clearly short of sleep -- was uttering the phrase "we have wet both balls," which brought out everyone's inner 14-year-old.)

Everyone who has ever examined the numbers says that with this ball -- which has now been used in preseason, the NBDL and some all-star games -- turnovers are about the same and shooting percentages are slightly up compared to stats with the old ball.

In other words, Shaquille O'Neal is dead wrong. Could this really be a case of players who are hell-bent on having something to complain about?

Brett Edwards of The Association blog gave the new ball a whirl:

Last night in my weekly pickup game we played exclusively with the new ball, full court 5 on 5 for about two hours, and there was a clear consensus: everyone loved it!
I was very surprised by this, and honestly I was anticipating the opposite. When I first got my hands on it, I thought my initial impression that the players were making too much of this would be wrong. It seemed a little softer and definitely felt different to the touch than the historically all-leather ball. But once game play began, everyone (about 13 of us) all agreed that the ball was not just good, but great to play with.

The grip is much better than the leather ball, as there is a slight tackiness to it, even after playing in the dusty-floored gym. As for the ball getting slippery once the sweat from the players gets on it? Complete nonfactor. It was excessively humid last night, everyone was sweating much more than normal, and there were zero instances of the ball slipping out of a player's hand, or of sloppy passes or shots because of this.

Washington Post blogger Dan Steinberg's day of inquiry, running around with a new ball, an old ball, and some professional soccer players, will probably one day be seen as one of the great early efforts of sports blogging. (One of those soccer players asked a really important question: If the problem is the ball getting sweatier and sweatier, can't they just bust out a new one like in baseball? Are there rules against that? Wouldn't that solve a lot of problems?) Steinberg's great day is all on shaky home/newspaper-reporter-shot video, too, including chucking everything they had off a fourth floor balcony. This is science, people. Or at least, kind of like science.

Mark Cuban put his position of influence to good use and inspired a team of actual scientists, in the University of Texas-Arlington physics department, to test the bejesus out of the ball. Their preliminary report to Cuban found (I paraphrase):

• Leather balls are bouncier, which could affect dribbling, reactions on the backboard, rim etc. (Brett Edwards found the same thing, and found shots that clanged off rim with the new ball tend to stick closer to home and have a better chance of lucking their way in.)

• When they're dry, the new synthetic ball is twice as grippy as the leather ball.

• When they're slightly wet, the leather ball gets grippier. The synthetic, meanwhile, doesn't absorb much water at all, so just a little bit of moisture is enough to spread all around and make the ball a real greased pig. When slightly wet, a leather ball is grippier than a synthetic one. (Assuming this is true, isn't it weird the people at Spalding were specifically promoting the new ball's ability to deal with moisture? From Spalding's official site: "Moisture contacts ball. Moisture spreads evenly. Evaporation occurs.")

• The new balls bounce much more erratically than the old ones. (Tell you what, though, it bounces a lot better than the pumpkin Steinberg chucked off the stadium in D.C.) 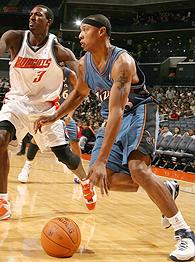 The new ball is sticking

Back on terra firma of the United States, Commissioner Stern presumably got his normal sleep patterns back intact and remembered that he never, ever, ever rolls over for a bunch of whiny brat ballplayers. He announced last week that the new ball was staying, so there. Period of inquisition and hand-wringing over. (Sadly, he never went into a lot of detail about the league's internal ball testing. I wish David Stern's summer intern had a blog.)

Which means the players have to lay down their arms, put off the revolution and slip back into "coping with the powers that be" mode.

Caron Butler of the Washington Wizards would have to be considered the poet laureate of this phase. He told Steinberg what must be the most moving and conclusive diatribe to date on the topic:

I mean, growing up, when you go to the park, people bring their own balls, you know? They bring Spaldings, they bring Fusions, they bring balls that've been ripped. Sometimes they bring balls with the little tittie popped out already, and they bounce and fly over here somewhere. So, I mean, you've got to play with it, you know? So I don't know what the big deal is. Let's play ball, you know what I'm saying?

Henry Abbott is a freelance writer who blogs daily at TrueHoop.