Robert Swift is the mystery man of the 2004 NBA draft.

The high school senior hasn't been on a plane to work out for anyone since he declared for the NBA draft in May. The 18-year-old, 7-foot Swift, who graduated from Bakersfield (Calif.) High School on June 3, only plays hoops at a local gym in his hometown, and drives down to Los Angeles for an occasional workout organized by his agency, SFX.

Yet, Swift is a lock for the first round. He won't go past No. 25 to the Boston Celtics, according to multiple sources in the league. And he could go a lot higher. But despite his low profile, Swift has a promise, a guarantee that he won't be available past the Celtics' third and final selection in the first round.

While unconventional, Swift's low-profile approach to the draft has actually helped create even more of a demand for the USC signee. 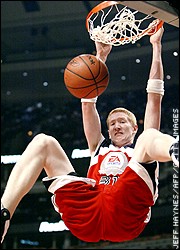 Utah is flirting with the idea of taking Swift at No. 14. The Clippers, who pick second, could make a trade with Atlanta for the Hawks' sixth and 17th picks and could select Swift with the latter of the two selections. Golden State may be interested in Swift if the Warriors' top choices aren't available at No. 11.

But, all of these scenarios would mean a team took Swift without interviewing him or working him out. They would be basing the decision on scouting him during the season.

"That's true," Swift's father, Bruce, said of his son not working out for anyone or going through NBA-organized physicals and medical testing procedures. Swift wasn't in Chicago with the rest of those projected in the first round.

"Plenty of GMs and scouts have seen him in action against the best high school players," said Bruce Swift of his son's 10 points and four rebounds in 19 minutes of the McDonald's All-American game, and then his 17 points and 12 rebounds and four blocks in the EA Sports Roundball Classic earlier this spring.

"There's something to be said for being 7 feet." Bruce Swift adds. "We ran everything through Arn Tellem [at SFX], and he kept us informed as to what we should do. I'm comfortable with his decision."

Swift is one of the few true centers in this draft. His father said the family had nothing to base the decision of not working out for teams on since it never has gone through the draft process. But while top picks around the country are interviewing with teams, going against other players who might be competing with them for the same draft position, Swift stays home.

"His daily routine is to hang out with his buddies and get into some open gyms, shoot a bit, play against local guys here in Bakersfield," said Swift, who added that his son has a personal weight and skills trainer.

And, in keeping a low profile, Swift said his son wouldn't be in New York for Thursday's draft. He said Robert's next trip would be on Friday for a news conference in the city of the team that selects him the previous night.

"Robert wants to go to a team that wants him and can use him," Swift said. "Whether he gets floor time in a game or is working in practice, whatever it takes, he'll do."

USC coach Henry Bibby referred to Swift as a "program changer." But Bibby won't get a chance to coach him, although he might coach against him if Bibby can land the Los Angeles Lakers job. Regardless, Bibby was in love with Swift's low-post skills, his hands, feet, and thirst for picking up the game.

One general manager, who didn't want to divulge his real interest publicly, told ESPN.com that Swift's value has increased because he hasn't worked out.

So, why are the Celtics so high on Swift? It may come down to the fact Boston may not find a better player, or a more ready player, at No. 15. If the Celtics pass on Swift with their first pick, they'll simply have to gamble that he'll be available with their 24th or 25th pick (or make a trade). The promise is that he won't slip past their last pick, not that he has to go with their first pick.

It's not uncommon for Boston to make a first-round guarantee. Boston promised it would take Kedrick Brown out of Okaloosa-Walton (Fla.) Community College in 2001. Like Swift, Brown hid out and didn't work out for teams. And, as promised, the Celtics selected Brown at No. 11. Brown has since been traded to Cleveland.

A year ago, the Celtics let it be known they would select Marcus Banks and Kendrick Perkins, so both players limited their workouts. Banks, a senior out of UNLV, went to Memphis at No. 13 and Perkins, a high school senior out of Ozen High near Houston, went to Memphis at No. 27. The Celtics swapped those two picks for their two picks of Troy Bell of Boston College at No. 16 and Dahntay Jones of Duke at No. 20.

"He's got a great commitment," said an influential NBA source. "He's safe. He's a true center with wonderful footwork. It's a novelty because he's not a highly glamorized high school guy. It certainly is unique that he hasn't been on a plane in this process, but he's a lock [for the first round]."

Brown did at least go to New York to shake NBA commissioner David Stern's hand in 2001. Swift won't even do that next week. No, the mystery man won't be unveiled nationally until Friday, when he likely will be announced as a first-round pick in Boston, in Utah or maybe with the L.A. Clippers.