Bob Lanier, Pete Maravich, Nate "Tiny" Archibald and 163 other players were selected in the 1970 NBA draft before Marty Blake turned heads of every talent evaluator in the room with the Atlanta Hawks' 10th-round pick: Manuel Raga of Mexico.

"They thought it was one of my many jokes," said Blake, the NBA's director of scouting who was then the Hawks' general manager.

The next round Blake did it again, selecting native Italian Dino Meneghin.

Blake had never seen either of the players perform on the basketball court before the Hawks selected them. He drafted them based only on the advice of acquaintances living overseas. Though he couldn't come up with the $35,000 to buy out either of their professional contracts with foreign teams, Blake is seen today as a pioneer on the international scouting front. 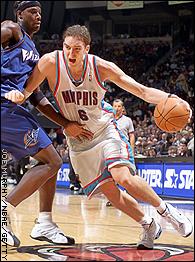 Thirty four years later, the quality of international basketball has improved, and so too has the process that NBA teams employ to evaluate talent of a foreign player. This past season, 71 players on NBA rosters were born outside the United States, and with the influx of foreign players only expected to increase, teams that hope to remain competitive must travel the globe to scout the world's best talent.

"Particularly if you have a high draft pick, you better make sure you are watching the world," NBA commissioner David Stern said. "A Pau Gasol could be a priceless acquisition, and if you are a team that never watched him and you picked 1 through 6 (in the 2001 draft), you have to be scratching your head and saying, 'What did I miss?' "

Gasol was the third overall pick by the Hawks, but was immediately traded to the Memphis Grizzlies, whose international scout, Rich Sheubrooks, is based in Gasol's native Spain. After the final year of his contract with FC Barcelona was bought out, Gasol quickly proved that he belonged in the NBA, scoring more points per game (17.6) than the combined effort of the Nos. 1, 2 and 4 picks in the 2001 draft (17.3 ppg), en route to earning the league's Rookie of the Year Award.

The costs of scouting in the league range from $100,000 to $1 million, depending on how many talent evaluators a team employs on its full-time staff and the locale of foreign players the teams might be interested in.

"But I don't hear many people complaining about what they have to spend," said Houston Rockets general manager Carroll Dawson, who has been with the organization for the past 24 years. In the past last two drafts alone, the Rockets have selected three foreigners -- Yao Ming, Bostjan Nachbar and Malick Badiane.

Dawson said the Rockets didn't even consider scouting players overseas until Arvydas Sabonis was taken by -- surprise! -- the Hawks in 1985. However, the Hawks had jumped the gun. Sabonis was too young to be eligible for the NBA draft, and the Portland Trail Blazers beat the Hawks to the punch in 1986, though Sabonis didn't play in Portland for another nine years.

"Considering the amount of money teams are paying today's players, they can't worry about scouting costs," said Blake, who remembers taking $28 out of his own pocket to pay for a round-trip bus ticket from Milwaukee to Fort Leonard Wood, Mo., his first NBA scouting trip, to see Sam Jones and Al Bianchi play in 1954. "The bottom line is that cost is a fraction of the net result."

Over the past six years, 25 foreign players or 14.5 percent of all players drafted have been first-round selections. 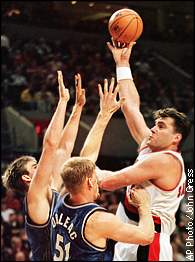 "There are more than a million basketball players worldwide with NBA aspirations," Dallas Mavericks owner Mark Cuban said. Only the Seattle SuperSonics have selected as many international players (6) as the Mavericks have since 1998. "We want to make sure we can locate the best of them and determine if they are good fits for the Mavericks. Geography is no longer a limiting factor."

Ten years ago, Dale Mock sold his International Scouting Service newsletters to half the teams in the NBA. Now, all his clients are college teams, as not one team in the league pays the $425 price to get the quarterly newsletter.

"They don't need our part-time scouting advice," Mock said. "They have a full staff on the ground in all parts of the world. They can't afford to make a mistake [by] either missing someone or drafting the wrong guy."

Most aggressive teams have at least one full-time scout based in Europe and fly team executives around the world based on their recommendations. At Reebok's Eurocamp, which took place in Treviso, Italy, earlier this month, the Nuggets had six staff members on hand, including general manager Kiki Vandeweghe and assistant general manager David Fredman, as well as "brain doctor" Jon Niednagel, who the team pays as a consultant.

"The costs have definitely gone up," Fredman said. "But to try to cut back on scouting in any sport is shooting yourself in the foot. Smart owners won't cut back because they understand that is our lifeblood."

Although Fredman, as the director of scouting for the Utah Jazz, admits he told team brass to select Russian forward Andrei Kirilenko with the 19th pick in the 1999 draft without ever seeing him in person, very few first-round decisions are based on video tape alone.

"The only way to properly evaluate a player is to go over and see them," said Dave Babcock, director of scouting for the Milwaukee Bucks, a team that had not selected a foreign player in the draft until they picked Szymon Szewczyk in the second round last year. "Very few teams over the last couple years have made a decision based on word of mouth and workouts. If you are drafting a guy in the lottery, you have to see him play 10 to 15 times. There's a lot of money on the line and you just can't afford to take a risk."

That being said, those who have lackluster workouts no longer make the grade.

Last year, with a record 20 international players selected in the draft, many critics suggested that scouts were buying into the hype of drafting foreign players. The preference for international players over Americans caused some players who proved their worth in college to take a jab at the logic.

"I should have left UCLA after my freshman year, moved to Yugoslavia and changed my name to Jason Kaponovich. I'd have been a first-round pick," said Jason Kapono, who was selected by the Cleveland Cavaliers with the second pick in the second round last year.

Cavaliers general manager Jim Paxson says the international hype has clearly leveled out this year. Case in point: A shocking 28 of the 38 international players who had applied as early entry candidates, including Tiago Splitter, Kosta Perovic and Peja Samardziski, withdrew their names before last Thursday's deadline, either because they had poor workouts or couldn't get a first-round guarantee.

"The days of the European mystique are numbered," said Keith Kreiter, who represents Phoenix Suns forward Maciej Lampe and 21-year-old Brazilian point guard Marcelo Huertas, one of the players who pulled out after trying out with more than 10 teams. "If you have the skills, you have to flaunt it. You can't just show up for a couple workouts and not work hard. Teams are definitely doing their due diligence."

Although teams like the Bucks and the Indiana Pacers have drafted only one player from outside North America in their history, that doesn't mean they aren't actively searching as much as teams like the Detroit Pistons, who used all three of their draft picks last year on foreign talent.

"We're out there with everyone else," Babcock said. "It is now safe to say that there are no more diamonds in the rough. Everywhere you go there are scouts from NBA teams evaluating that same player."

In fact, the Pacers have one of the most extensive scouting departments in the league and are one of two teams that have a full-time scout, Joe Touomou, who covers Africa and South America. 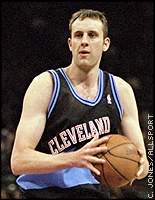 Paxson has been listening to the recommendations made by Rudy D'Amico since he became the team's international scout in 1999. Still, the team hasn't drafted a foreign player since taking Zydrunas Ilgauskas in 1996.

"Sometimes I think he doesn't think we take him seriously," Paxson said. "But whether we take a player or not depends on several factors, including when we pick and what our needs are."

The New Orleans Hornets are the only team in the NBA which, despite making 26 selections since 1988, has never taken an international player.

Shoe companies have been helping NBA teams cut some of their travel costs by organizing camps in foreign countries that group together the best players in the surrounding area. That's because they, too, want to find the next NBA star.

In addition to Reebok's Eurocamp, adidas recently sponsored a camp in Shanghai, China, that included the top 50 players in Asia and has plans for another camp in July in Berlin, Germany.

The relationship between the shoe companies and some NBA scouts goes even further. The Grizzlies' Sheubrooks doubles as a scout for Nike, who Gasol predictably signed with when he came to the United States.

"Basketball Without Borders," a joint program between the NBA and the Federation of International Basketball Association, has organized camps this year in Europe (Treviso, Italy), Latin America (Rio de Janiero, Brazil) and Africa (Johannesburg, South Africa).

The camp director, Pistons international scouting director Tony Ronzone, has the benefit of working with one of the largest scouting budgets in the league, which hovers around the $1 million mark.

"Scouting is becoming more consequential, in part because so many teams are capped out, the only way to add talent is through the draft and with salary cap exceptions," Pistons chief executive Tom Wilson said. "It is more difficult because you are scouting the world and you are guessing how the foreign players will match up against American talent and it's a crapshoot to some degree."

Even though the Pistons won the championship this year, many are questioning whether they would have been better off selecting Carmelo Anthony instead of Milicic.

In today's scouting world there's only one sure bet: Don't expect any team to come up with an unknown like Manuel Raga ever again.