ORLANDO, Fla. -- We have established for weeks now that the NCAA rules that make players pay for their own expenses up front before individual team workouts have pushed players to stay in the draft.

Well, there is one exception: The NCAA allows the NBA to pay for the league's predraft camp without any impact on a player's college eligibility.

As such, nine players -- to the best of our knowledge -- are in Orlando for the free ride to test their draft status. Drills begin Tuesday night, games are played Wednesday through Friday and physicals occur over the weekend. By the end of the week, we should know how many of these nine will be staying in the draft. A few of the players listed below did have team workouts and, if they choose to return to school, will have to go through the paperwork-driven process of proving that they paid up front for the expenses.

There are two other players, both higher-profile, who will be in Orlando for private workouts. Pitt junior center Aaron Gray will go through physicals at the draft camp but he'll also have a workout Thursday for NBA personnel. Meanwhile, Villanova sophomore guard Kyle Lowry will have one on Wednesday.

Who are the nine and what do they need to do this week according to NBA personnel?

1. Morris Almond, Rice
Numbers: 6-6, Jr., F, 21.9 ppg, 5.8 rpg
Where does he stand? Needs to play his way into second round.
How does he do it? He must make a name for himself by standing out as a big-time scorer.
What's at stake? If he returns, Rice has a legit shot to be an NCAA Tournament team.

2. Renaldo Balkman, South Carolina
Numbers: 6-8, Jr., F, 9.6 ppg, 6.3 rpg
Where does he stand? Still trying to play his way into the draft. NBA personnel say he is putting out vibes that he wants to stay in the draft.
How does he do it? Must prove he can be a true NBA small forward with ballhandling, shooting and passing.
What's at stake? If he leaves, the Gamecocks go down a notch after losing three of their top five scorers. South Carolina has recruited well, but he could be the difference between the NCAAs and NIT.

3. Bobby Brown, Cal State Fullerton
Numbers: 6-1, Jr., G, 17.5 ppg, 4.6 apg
Where does he stand? He's a potential second-round pick.
How does he do it? He has to prove he has point guard skills. Everyone knows he can score.
What's at stake? Fullerton was 16-13 with him last season but the Titans had three seniors in their top six. Lose Brown and the key departures would rise to four. You do the math. 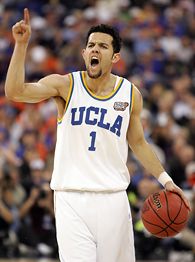 4. Jordan Farmar, UCLA
Numbers: 6-2, So., PG, 13.5 ppg, 5.1 apg
Where does he stand? He's a solid first-round pick if he stays in the draft.
How does he do that? Well, he can still move up, which is what he's trying to do here. His floor game needs to be tight. He'll need to show how well he can run a team.
What's at stake? The Bruins are a Final Four contender with Farmar and leading-scorer Arron Afflalo back (the assumption is that he will return to school after not attending Orlando). Still, the Bruins say they have Darren Collison ready to go to offset a Farmar departure, so it might not be as damaging as it seems if he leaves.

5. Daniel Gibson, Texas
Numbers: 6-2, So., G, 13.4 ppg, 3.6 rpg, 3.1 apg
Where does he stand? He is considered a second-round pick.
How does he change that? He needs to prove he's a point guard, not just a wing. He was moved off the ball during the season. The comparison being made is to Bobby Jackson. If that's the case, Gibson must stand out as an all-around ballplayer at the camp. The consensus is that he leaves the camp in the same state -- second round.
What's at stake? If he returns, the Longhorns avoid losing all five starters. Gibson would be a bridge to the newcomers and allow Texas to have a tutor for newcomer D.J. Augustin. He'll complement A.J. Abrams, who replaced Gibson at the point during the season. Either way, the Longhorns will be rebuilding, but with Gibson, they're more of a challenger to Kansas and Texas A&M.

6. Coby Karl, Boise State
Numbers: 6-4, Jr., 17.2 ppg, 5.1 rpg, 4 apg
Where does he stand? A possible second-round pick but nothing guaranteed.
What does he have to do? Well, he must prove that he is a solid defender and can score against elite competition.
What's at stake? Karl is battling thyroid cancer. Still, the son of Denver Nuggets coach George Karl is going ahead with his plan of testing the draft process. If Karl returns, the Broncos (14-15, 6-10 WAC) are a player in the WAC next season. If he doesn't, they'll drop. It's that simple.

7. Blake Schilb, Loyola-Chicago
Numbers: 6-7, Jr., F, 19.1 ppg, 5.2 rpg, 3.9 apg
Where does he stand? He is considered to be a bubble second-round pick.
How does he change that? He'll have to be a standout performer, but the consensus is that he will return to Loyola next season.
What's at stake? He was the leading scorer on a team that had only one senior in its top 10. With Schilb back, Loyola has a realistic shot of winning the league after going 19-11, 8-8 (Horizon) last season.

8. Mustafa Shakur, Arizona
Numbers: 6-3, Jr., 11.2 ppg, 3.7 rpg, 4.7 apg
Where does he stand? He is in the second round but could slide out of the draft.
How does he change that? He desperately wants to stay in the draft. The Arizona coaches have started to move on emotionally, already saying they can see J.P. Prince running the show next season. Shakur must prove he can shoot the ball well and improve his decision-making.
What's at stake? Talk to Arizona and the staff says not much. The Wildcats were more concerned that freshman Marcus Williams nearly declared for the draft. Losing Shakur won't crush this program in the slightest. The Wildcats will be fine if he stays in the draft.

9. Darius Washington, Jr., Memphis
Numbers: 6-2, So., G, 13.4 ppg, 2.8 rpg, 3.1 apg
Where does he stand? He is in the second round. How high is still unknown. It's not crazy to think he could slide out of the draft, either. Even though everyone assumes he has signed with an agent, there is no record of that yet. So, for these purposes he's staying on the list. Memphis coach John Calipari expects him to stay in the draft.
How does he change his stock? He has to make good decisions and prove he is truly a point guard. Decision-making has been the knock on him throughout his career.
What's at stake? If you talk to Calipari, there doesn't seem to be much at stake. The Tigers are set because of incoming guard Will Kemp and the return of Andre Allen, who was much more of a point than Washington for the Tigers.

Andy Katz is a senior writer for ESPN.com