Of the dozen players the NBA trotted out as proposed lottery locks Saturday in Orlando, no one was as high on being a top pick as LSU redshirt freshman Tyrus Thomas.

Thomas wasn't cocky. He simply was confident. He said he knew in the fall, fresh off missing his freshman season with a bulging disk, that he could end up being a candidate for the top pick in this draft.

Nothing about Thomas is a joke. He's supposedly a bit looser around his teammates, but on the court and with the media, he's much more serious.

He also has Dominique Wilkins-like flying ability and his shot blocking was awe-inspiring at times last season. He is the player with the most upside in this supposedly modest draft.

"Did I think this was possible? I thought it was possible, honestly, I did," said the 6-foot-9 native of Baton Rouge, La. "I know a lot of people didn't. A lot of the critics weren't in the gym. They watched the game. They didn't watch me at 9 or 10 o'clock working out, rebounding for myself. 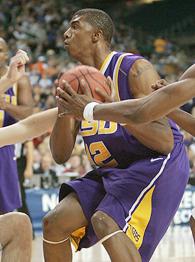 "I'm telling you, I honestly thought this could happen. All I did during my redshirt year was work out, night in and night out. Even during the season, I was shooting at nights, in the morning, running, and knew this was my goal."

But where did this "I'll show you" attitude come from?

"Tyrus Thomas always believed in himself, and deep down he always thought he was going to be a very good player," LSU coach John Brady said. "I don't think he expressed it until now. Now he's revealing what he always thought about himself."

Basically, Thomas now has the forum.

"He always operated under the belief that he was better than people think," Brady said, noting that Thomas didn't come from winning programs, so he probably didn't feel as comfortable pumping up himself in the past.

Thomas also wants you to know that he hardly showed what he's capable of at LSU, where he averaged 12.3 points and 9.2 rebounds last season despite not starting the first nine games (and missing four along the way because of a high-ankle sprain). It was his defense and shot blocking, though, that made him stand out.

He blocked five shots against Duke in the Sweet 16 and swatted away three against Texas in the Elite Eight.

"I was watching that Duke game and saw Shelden [Williams] going for a low-post power move when [Thomas] came out of nowhere and threw it into the stands," said former Texas center LaMarcus Aldridge, another candidate for the No. 1 pick. "He's an amazing athlete."

Despite a developing midrange jumper, Thomas' game at LSU was mostly up and around the rim next to Glen "Big Baby" Davis. That's where he was needed, but it apparently is not where Thomas would like to be in the NBA.

"I feel more comfortable facing the basket and on the perimeter," Thomas said. "Once again, the critics don't know. LSU was the first time I've played in the post. A lot of guys don't know that. They'll say, 'He didn't shoot the ball.' Well, I didn't shoot the ball because I didn't shoot. They'll say, 'He didn't put the ball on the floor well.' Well, the offense didn't let me put the ball on the floor. A lot of people make assumptions and don't really look at the games. I have a little bit to prove and show what I can do."

That's Thomas' take, anyway. Brady said Thomas played with his back to the basket in high school.

As a first-year player at LSU, Thomas had to earn his minutes and he started the season coming off the bench behind Darnell Lazare. Brady said the Tigers could have removed the redshirt the season before and played Thomas for the final 12-14 games, but Brady didn't think it made sense for Thomas or the program.