WALTHAM, Mass. -- If you wanted a taste of what the 2006 NBA draft has become, then you needed to be here Monday with the four likely finalists for the Boston Celtics' No. 7 overall pick.

That's if they even keep the pick, with a flurry of trade possibilities being discussed.

You see, the Celtics are like most teams in this draft. They like these players, but they don't love anyone in particular and they're quite open to trading the pick if the offer is tantalizing enough.

Most NBA teams are feeling the same way about the '06 draft. There are plenty of choices at nearly every spot in the first round. The players all know that they aren't on any kind of ladder but rather will be slotted by each team as the picks unfold. In fact, this should be termed the "fit draft," because this year a team is far more likely to take a player that fits it, not a player who is too good to pass up.

"There's no player that sticks out as someone they have to have," Rondo said.

"When LeBron [James] was in the draft, even if they had a dominant forward, they were still taking LeBron," Williams said. "This year, teams are only going to take what they need. A better fit is more important than going high."

Williams cited Darko Milicic as the prime example. He didn't fit Detroit, yet went No. 2 overall in that James-led draft in 2003.

"He didn't play for two years and his contract was coming up [in the third year of the then-three-year rookie guaranteed deals] and he had to show what he could do," Williams said.

Milicic was shipped off to Orlando last season, where at least he was able to get more significant minutes.

The idea of a fit draft isn't a unique concept. But it has put players in certain spots, more this year than any other in the recent past. Williams is a perfect example of a player who fits only with a few teams.

He worked out for Boston and Toronto twice each, and also for Minnesota, Houston and Atlanta. But if Williams is going to be a lottery selection, he's likely going to go at either No. 7 to Boston or No. 13 to Philadelphia (he has an interview with the Sixers scheduled Tuesday). Even though he said he fits with the Celtics, Hawks and Raptors, he understands the latter two aren't likely to pick a point guard at No. 5 or No. 1 (barring trades).

Williams and his representation, Bill Duffy, understand he could fall. 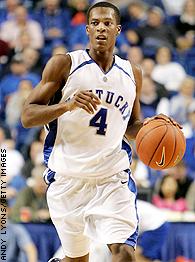 Rondo essentially is in the same situation. He worked out for 11 teams (Boston, Atlanta, Houston, Phoenix, Sacramento, Indiana, Washington, Minnesota, Toronto, New Jersey and Seattle); his range is a bit wider than Williams'.

"I'm all over the board, anywhere from seven to 25," Rondo said.

Simmons is another classic example of what this draft is all about. He could go as high as Boston at No. 7 or as low as No. 20 to New York.

Simmons worked out for the Celtics twice, and for New York, Philadelphia, Chicago (for its No. 16 pick, not No. 2), Seattle, Minnesota (not likely for the No. 6, but maybe in a trade scenario), New Orleans/Oklahoma City and Washington.

"I don't have a clue of where I'm going," Simmons said. "I'm just trying to leave a lasting impression."

Foye actually could be the lone exception to this trend. He is looming as the ultimate climber in the draft after being originally pegged as a combo guard; but he's making a strong case that he should be considered a point more than a shooting guard. If that's the case, his candidacy has been strengthened.

Foye said he was the one who controlled the Villanova offense in the final eight minutes of the game. He said it may have appeared that Kyle Lowry and Mike Nardi were the point guards, but if you look deeper into how he ran the Wildcats, you'll see that he was the playmaker. He still averaged 20 points per game, which is why he says there is the appearance that he was a shooting guard.

Foye worked out for every team in the top 14 except for Chicago, Charlotte and Portland. He definitely is alive for Atlanta at No. 5 and Minnesota at No. 6 if either team decides to go with a point guard.

Like Williams, this was Foye's second stop in Boston. 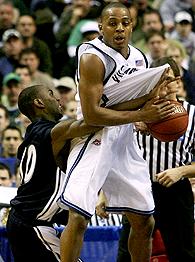 "I had a good workout before and was dominant -- got to the rim, shot the ball well -- but maybe they wanted to see if I could do it again," Foye said. "I went against one of the best defenders and showed what I could do."

If you must get a read on the actual workout (often these are overrated), it probably was a draw, with each guard taking the other to the hole with quick moves to get into space. Each player made his share of shots. Still, this was just two-on-two, and being a point means running an entire team, not doing a drill or playing in special situations.

The Celtics spent quality time with each one of the four players Monday. Still, at the end of the day, they were discussing the pick in a potential trade with Portland (possibly for point Sebastian Telfair), among others. So, as much as the Celtics are weighing a decision on one of these four, they may scrap the whole thing and make a trade for a veteran or a projected up-and-coming player.

The same thing is going on in Seattle, where the Sonics worked out a host of players in the past few weeks but aren't so enamored with anyone that they've ruled out trading their No. 10 pick (possibly to the Suns, who could select Rodney Carney). Other teams could do the same thing -- mull over a prospect and then just trade down or out of the draft.

So, as the draft draws near, even the top prospects get more anxious, knowing that many NBA teams aren't enthralled enough with them to keep their first-round picks. Unlike some actor hoping to land on Broadway, though, someone will give them a role -- and a guaranteed two-year contract. They just won't know who until Wednesday night.