NEW YORK -- The easy thing would be to pick on Marcus Williams, to call him the player who dropped the furthest, to question his decision to leave Connecticut a year early in light of the projected lottery pick falling eight spots beyond that in the NBA draft Wednesday night.

That viewpoint would be fair in a traditional NBA draft. This was not one of those.

All along, this year's draft was a "fit draft," one in which teams were selecting what fit for them rather than taking the most talented players remaining at the time of their selection. 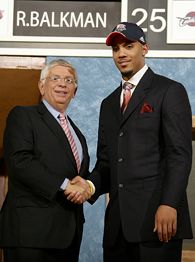 That's why it shouldn't come as a surprise that once Williams slipped past Boston at No. 7 (the Celtics' pick, Randy Foye, was packaged first to Portland and then to Minnesota in trades) and Philadelphia at No. 13 (the Sixers' pick, Thabo Sefolosha, was sent to Chicago in a swap for No. 16 pick Rodney Carney), he wasn't going anytime soon.

The only other team that may have wanted a point guard after the Sixers was Indiana at No. 17, so for Williams to drop to New Jersey at No. 22 wasn't totally startling.

In fact, after the pick, Williams was overjoyed when he made his rounds through the media along the terrace at Madison Square Garden.

"I'm a great fit in New Jersey," he said of joining a team that has Jason Kidd as its starting point guard but might end up lacking depth at the one given the status of Jeff McInnis (player option) and Jacque Vaughn (unrestricted free agent).

"I'll play behind one of the best point guards in the NBA and a guy that I tried to style my game after. I can go into the league and learn things from him firsthand."

This doesn't mean Williams wasn't a bit surprised to see players like Olexsiy Pecherov go in front of him (to Washington at No. 18). But he was smart enough to start to look at team needs as the draft was unfolding.

He said he was asking his father who needed point guards after the lottery. They started to look at New Jersey and figured out that was probably where he was going to land.

Even the selection of point guard Rajon Rondo at No. 21 -- by the Suns, who then traded him to Boston -- wasn't a total stunner, since the Celtics worked out both Rondo and Williams on Monday (and they are represented by the same agent, Bill Duffy). Ultimately, Boston simply liked Rondo a bit better than Williams.

While Rondo might still end up being a part of a potential Allen Iverson deal with Philadelphia, Williams lands in a spot where he knows he'll be secure.

"I never thought, 'Oh, man. I'm dropping,'" Williams said. "Being here, after what I went through last summer, is a great opportunity."

Williams is right. It is amazing that he ended up in the first round at all after he was suspended for the first two months of the season for his role in the theft of laptops on UConn's campus last June.

"I went through a lot, so to be here in New York ... is something," Williams said.

No one will remember the pick number if Williams sticks with the Nets and becomes Kidd's heir apparent. It seems the top-rated point guard in the draft may have found the perfect fit.