WALTHAM, Mass. -- Joakim Noah took an entry pass, planted and scored on Michigan's Courtney Sims. He held up his hands during defense and on a defensive slide drill across the lane. He bench pressed.

He did everything he was asked to do during Monday's NBA draft workout for the Boston Celtics. It was no different for the Florida junior forward when he went through workouts for Chicago, Charlotte and Minnesota last week. It won't be any different when he works out for Memphis, Sacramento or Atlanta in the next two weeks. 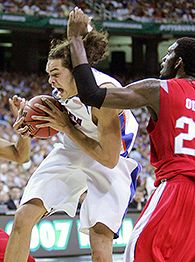 After watching Noah's hour-long workout, there was no reason to think he was hurting. But he was.

"Right now I'm at 75 percent," Noah said. "I was playing at 75 percent during the season. I don't feel like I'm getting the proper height on my hook shot, and it did bother me a bit but I don't have any regrets."

Yet all of the teams know about his shoulder injury. They know because they have seen the MRI of a slight tear in his right rotator cuff. But you can't even begin to suggest that it is affecting him. He won't let it.

"It's something that has been bothering me for a while," said Noah. He said he first suffered the injury in mid-February when the Gators clinched the SEC against South Carolina. "I was getting a lot of [pain relieving] shots in my butt and when you're playing in a game, all of the adrenaline was pumping at that time of the year and I didn't think there was time to sit out."

Noah said he got the MRI after the season and his doctors at Florida told him that surgery wasn't necessary. He said even if they had told him it was, he wasn't going to go through with it now because he has a draft to prepare for and a career to begin.

So he began to rehab after the season. But that didn't stop Noah from pushing his shoulder.

"He's a highly competitive kid, and there was never a time during the year that he wanted to be held out of practice," Florida coach Billy Donovan said Tuesday. Donovan said he worked out the other Florida draft hopefuls -- Al Horford, Corey Brewer and Taurean Green -- after the season ended. Noah wanted to work out as well, but the team doctors and trainers told Donovan that Noah should rest his shoulder.

"But Jo came to me and said, 'Coach, work me out.' I said 'I couldn't.' He said, 'How about stuff with my left hand?' So we worked on his left-handed jump hooks and ballhandling without raising his [right] shoulder," Donovan said. "But then he wanted to go with this right. I just walked off the court. Jo is his own man and if some guy says don't work out, he's going to work out. He's his own man. He did have problems with it, but it didn't prevent him from practicing or playing."

Noah said he rehabbed the shoulder during workouts with workout guru Joe Abunassar in Los Angeles in May.

Noah said he was fine when he arrived in Orlando for the pre-draft physicals two weeks ago. That was until he met with every team's doctor.

Donovan said he understands why the team doctors have to be certain.

"Every team owes it to its organization to properly check and make sure the players are medically sound," Donovan said. "They're investing a lot of money, and they want to do proper research. I don't have enough knowledge to say where he's at, but he says he's fine. I have no reason not to believe him. But I wouldn't judge him off of that. I think he's done enough off a two-year period."

That's true. Noah was the Most Outstanding Player at the Final Four after helping the Gators win the 2006 national title over UCLA. He was instrumental again this past April with the title victory over Ohio State.

Noah's scoring did dip from 14 points as a sophomore to 12 points his junior year. But there was more emphasis on Horford in the post this past season.

But what Noah is doing should make NBA teams take notice. He's playing through discomfort. Granted, every injury is different and so is pain tolerance. But it's normal for players to not work out during an injury prior to the draft. Duke's J.J. Redick did it last year when he had a back injury.

"I'm going through the workouts and taking contact," Noah said. "I don't feel 100 percent, and if I don't get picked where I think I should, it won't be because I didn't try. I understand this is a business. But give me four or five weeks with my new team and I'll do the rehab and be fine. It could be a lot worse. I could have broken my leg."

Noah was saying this after he worked out against Sims, who was brought in as a practice partner. Meanwhile, North Carolina's Brandan Wright didn't work out against Noah or Sims. He shot by himself at one end of the court. Noah and Sims did the Celtics' infamous three-minute run (up and back for three minutes) against one another. Wright did it later by himself.

Noah didn't want to get into Wright's not working out but basically didn't understand why someone wouldn't want the competition. He said he understood if the player was advised not to. It's not abnormal to do the one-on-one workouts. It does happen. It's just not a decision made by the majority of players. Wright and China's Yi Jianlian are the only two players who aren't working out against anyone else. So too is Georgetown's Jeff Green, although that may change if Green stays in the draft after the withdrawal deadline on June 18.

Wright said he and his agent (Jim Tanner) talked about it and decided he was used to working out by himself so he could show all his fundamentals.

"You can show all your skills and show what you can do," Wright said.

Wright will take that same one-on-none act to Milwaukee (selecting in the No. 6 spot), while also likely working out for Atlanta (No. 3), Memphis (No. 4) and Minnesota (No. 7) after Monday's workout for Boston (No. 5).

Celtics coach Doc Rivers said he wasn't going to hold Wright's abstention from working out against the former Tar Heel. Rivers did see Wright when North Carolina lost to his son Jeremiah's Georgetown team in the Elite Eight in New Jersey last March. Rivers said he could study Wright's footwork, his weak hand and check how explosive he is in his shooting drills.

The Celtics' staff also got a chance to interview Wright. But what Rivers didn't see with Wright was the competitive fire and basketball IQ that Noah displayed.

"I love his energy," Rivers said of Noah. "He's so verbal and that is so overlooked. He instinctively talks [on defense]. You can't teach that. It's an innate act. He has a high basketball IQ. That's important."

And Noah has a high tolerance for pain. That's something that will give Noah more points than any negativity that might emerge from an MRI.