Right now, you could look at it either way. 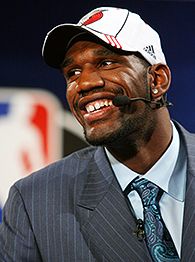 The Blazers, on the same night they took Greg Oden with the No. 1 pick, also dealt away the closest thing they've had to an all-star in the past half-decade, agreeing to terms with the Knicks on a deal sending Zach Randolph to New York (along with Fred Jones and Dan Dickau) for Channing Frye and Steve Francis.

And the Sonics, on the night they chose Kevin Durant of Texas with the No. 2 pick, also agreed to send their best player, Ray Allen, to the Boston Celtics for Delonte West, Wally Szczerbiak and the rights to the No. 5 pick, Jeff Green.

"I know we're going to be connected for a long time, Kevin Durant and Greg Oden," said Oden. "He's a really, really good player. I'm a pretty decent player. So I hope things work out."

Yes, things almost certainly will work out for the both of them, and in a decade's time or less we'll most likely have an answer to the question of which of them should have gone first -- a debate that right now has the potential to live up to the arguments surrounding some of them other epic NBA drafts in recent memory.

Drafts such as 2004, when Dwight Howard got the nod over Emeka Okafor -- a move that now seems like it was the correct one for the Orlando Magic.

Or a draft like 2003, when the debate wasn't over who should have gone first, but ultimately over who went second -- Darko Milicic over Carmelo Anthony, Chris Bosh, Dwyane Wade, Josh Howard and others. 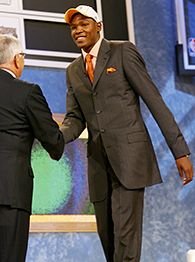 But mostly in the months leading up to this draft, people have been comparing it to the infamous 1984 draft when Hakeem Olajuwon went first, Sam Bowie second and Michael Jordan third. The prospect of being the next Portland GM to miss the next Jordan no doubt weighed heavily on the mind of Blazers GM Kevin Pritchard.

"I'm far from being a savior," Durant said at his Madison Square Garden news conference following his selection. "Ray Allen is a great player, and it would have been fun learning from him, but Delonte West and Szczerbiak are not bad at all, and I'm looking forward to playing with them."

Oden and Durant both drew a few laughs with their quick-witted responses, and the two were practically linked at the hip as they made their way through the so-called "car wash" upstairs from the draft stage at the Garden, going from interview podiums to network cubbyholes to brightly-lit photo shoot rooms -- and even visit to the the ESPN SportsNation chat room -- the same place where I cornered Minnesota Timberwolves draft pick Corey Brewer after his chat session and asked him if he expected he'd ever play with Kevin Garnett?

Well, crazy might not have been the perfect word on a night when teams were mostly conservative with their picks all the way through the first round. The Blazers could have taken a risk and gone for Durant, but they didn't. 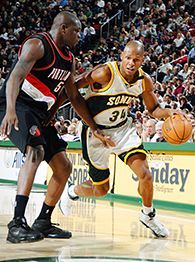 The Lakers could have stolen everyone's thunder by announcing what their plans are in the days ahead for Kobe Bryant, but they didn't. Kobe could have announced plans for his holdout, but he stayed mum instead.

The Timberwolves could have grabbed the spotlight, too, by coming to a conclusion on the Garnett trade talks, which they didn't.

Heck, the Atlanta Hawks even could have stuck to form and walked out of here without a point guard, which they didn't.

Instead, this was a night when the two teams at the top of the draft went with the safe picks -- even though those safe picks carry the weight of massive long-term expectations that won't dissipate until either those expectations are fulfilled, or until it becomes clear whether one of the teams came out ahead of the other in what will forever be remembered as the Oden-Durant draft.

Yes, it might be remembered in Boston as the Ray Allen trade night, or in New York as the Zach Randolph trade night. But in the long run, it'll be the night of Greg Oden and Kevin Durant, who forever will be linked as the faces of Draft Night 2007.

Check back in a half-decade or so to see which one of them should have gone first.