TUCSON, Ariz. -- As expected, Arizona sophomore Marcus Williams announced Thursday that he will leave college to become eligible for the NBA draft.

Williams considered the NBA last year but decided it was best for him to stay for another season in Tucson. This year, the 20-year-old said he will hire an agent and will not return. 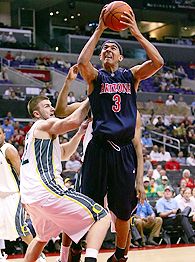 "I think I'm ready," Williams said. "It's going to give me a lot of opportunities to give back to my community. I felt like it was time. It was a hard decision, but the coaching staff has been great. I've had a lot of support from them."

The 6-foot-7 forward made the all-Pac-10 team after leading Arizona in scoring last season at 16.6 points per game. He said he hopes to prove himself worthy of a first-round pick.

"A lot of it depends on my workouts with individual teams," Williams said. "I am in the gym twice a day, every day, trying to make sure I can go to the right situation and as high as possible."

Coach Lute Olson had said in February that he would be shocked if Williams didn't turn pro.

"Marcus is very, very hungry for this next step," Arizona associate coach Jim Rosborough said at Williams' news conference. "Sometimes people don't realize what the motivation is, the deep, deep motivation. I know Marcus is hungry for the success he will have. From the staff we wish him well, and he will do well."

Williams, a high school standout in Seattle, said he would try to continue his class work through the spring while also taking part in workouts with NBA clubs.

"It's always been a dream of mine to play in the NBA," said Williams, "and I feel like I'm in a good position to take that next step."