LAWRENCE, Kan. - Brandon Rush, who led Kansas in scoring last year, has withdrawn from the NBA draft and will play his junior season at the school. 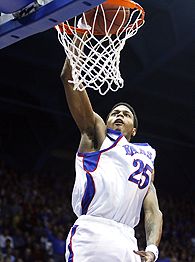 Jayhawks coach Bill Self said that Rush's decision to declare for the draft allowed him to see what NBA teams thought of him.

"Brandon has handled the process exactly the way the system was designed and has followed through with everything he said he would do," Self said. "It has always been my goal that Brandon make the best decision for his future. I believe that Brandon will prepare harder than ever to put himself into a position that he will be a very high NBA draft pick after his junior season."

Sophomore Julian Wright, another starter, has committed to the draft. But with Rush returning, Kansas will have all but one of the 14 players who went 33-5 and captured the Jayhawks' third straight conference title.

Rush suffered a knee injury recently, but said that incident had little to do with his decision.

"People will think the reason I am returning is because I injured my knee playing in a pickup game," Rush said in a statement released by the school. "That is not true, but it did re-enforce to me that the time was not right to go to the NBA.

"We have a great team returning and I love my teammates. The people at Kansas and the fans have treated me so well. It is hard to pass up the opportunity to experience another year of that."