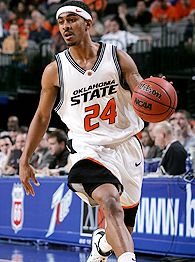 "It has always been a dream of mine to play in the NBA, and now
is the time for me to pursue that dream," Curry said Monday, according to The Associated Press.
"This is an opportunity that I just can't pass up. I'm ready for a
new chapter in my life."

Multiple sources told ESPN.com that Curry is under the impression that he is being selected in the second round by Chicago at No. 49. But, when contacted over the weekend, a member of the Bulls' personnel department said that was simply not true. A promise for a late second-round pick would be rare, considering that a number of scenarios could occur in front of a team that may make upholding such a guarantee tough to deliver.

Curry is being advised to remain an amateur through the draft and not sign with an agent. If Curry were to go unselected, with no signed representation, then he could return to college. Kentucky's Randolph Morris was the latest to do that two years ago, although his association with an agent ended up costing him 14 games the ensuing season.

"We've thoroughly enjoyed having JamesOn as a part of the
Cowboy basketball family," Sean Sutton said, according to AP. "I appreciate the
many contributions that he's made to our program. He's a special
young man who is a terrific basketball player. He also excelled in
the classroom during his time in our program."

Curry was an alternate for the Orlando pre-draft camp but didn't attend. A pre-draft NBA camp official was unclear last month if Curry chose not to come or was never taken off alternate status. Curry didn't have any other workouts, according to Oklahoma State.

Curry was second on the Cowboys in scoring at 17.3 points a game and first on the team in assists at 3.7 a game. The Cowboys finished a disappointing 6-10 in the Big 12, 22-13 overall, and lost to Marist College in the first round of the NIT.

Andy Katz is a senior writer at ESPN.com. Information from The Associated Press was used in this report.