NEW YORK -- The Portland Trail Blazers got Greg Oden and
felt like they won a championship.

The Seattle SuperSonics settled for Kevin Durant -- but their
night wasn't quite the celebration.

The Trail Blazers ended months of debate Thursday night when
they chose Oden over fellow college freshman Durant with the No. 1
pick in a highly anticipated NBA draft.

Portland opted for the 7-footer who can dominate a game with his
defense over the sensational scoring of Durant, who would have been
the No. 1 pick in many other years after one of the most
outstanding freshman seasons in NCAA history.

But franchise centers are hard to find, and most believe the
Blazers got one.

"I was on the phone with the radio station back in Portland,"
Oden said. "They said they stomped the floor like they won the NBA
championship once they called my name."

Fans rushed the court at the Rose Garden, where a perennial
playoff team has fallen on hard times after some worse behavior.
But the Blazers got Rookie of the Year Brandon Roy last year and
got an early start on having next season's winner when they grabbed
Oden to play alongside LaMarcus Aldridge.

"They did have a bad [reputation], but I think Brandon and
LaMarcus kind of turned that around," Oden said. "I hope that I
can come and just push that along some more."

As expected, Durant was quickly taken second by the Sonics. The 6-9 forward, wearing an orange tie to match Texas' colors, averaged 25.8 points and 11.1 rebounds, ranking fourth nationally in both categories, and is considered the most talented player in the draft. 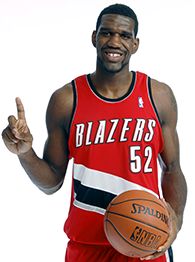 Seattle also traded Ray Allen and the rights to the 35th overall pick (Glen "Big Baby" Davis) to
Boston for Wally Szczerbiak, Delonte West and the No. 5 pick. Boston selected Georgetown forward Jeff Green for Seattle with the fifth pick. Seattle will also receive a future second-round pick from the Boston Celtics.

Moments after he was picked, Durant saw on TV that the SuperSonics had traded Allen. Fans booed the Allen trade at a draft party for the Sonics, who still face losing Rashard Lewis to free agency.

But the 6-9 Durant doesn't consider himself the Sonics' savior.

"Not at all, not at all," Durant said. "When you play since
you were 8 or 9 years old, you know the game is not a one-man sport. I'm far from being a savior.

"We are thrilled to have Kevin," Sonics GM Sam Presti said. "But at the same time, to make
the decision to move a player -- and a person -- like Ray Allen was tremendously difficult.

"Boston really pursued this. What started as a smaller conversation became fulfilled. Their pursuit was impeccable."

Durant said he knows Green from growing up in the Washington, D.C. area.

"I know Jeff pretty well, on a D.C. Blue Devils team and we gained a friendship from there," Durant said. "He's a great player and I can't wait to play with him."

While Seattle made an impact by drafting Durant and trading for Green, the Charlotte Bobcats also made their presence felt via a trade. The Bobcats traded the draft rights to Brandan Wright, the No. 8 overall pick, to the Golden State Warriors for Jason Richardson and second-round pick Jermareo Davidson (No. 36 overall).

Bobcats part-owner Michael Jordan has been saying for weeks that he didn't want a rookie, but wanted an established player who could help put the Bobcats in the playoffs.

Oden led Ohio State to
the national championship game despite never playing at full
strength after surgery on his right wrist. Still, he averaged 15.7
points and shot nearly 62 percent while drawing comparisons to Bill
Russell for his rebounding and shot blocking abilities.

Looking nervous and battling a head cold since arriving in New
York, Oden shared a long handshake with commissioner David Stern
before heading off for interviews. He was expected to fly to
Portland later Thursday night.

Oden could have been the top pick last year out of high school
if not for the NBA's age requirement rule.

"I'm a better player because of that year in college," Oden
said. "Coach [Thad] Matta, he taught me so much, first about being
a young man growing up in Columbus."

The Pacific Northwest rivals got an immediate jump-start to
their rebuilding plans by moving up in last month's lottery to grab
the top two picks. Though this is considered the deepest draft in
years, Oden and Durant are regarded as the only can't-miss players.

The Atlanta Hawks used the No. 3 pick, their first of two in the
lottery on Al Horford, who saluted the pro-Florida crowd with the
Gator chomp. The two-time defending NCAA champions became the first
school with three players selected in the top 10 of the same draft.

They made it when Corey Brewer went to Minnesota at No. 7 and
Joakim Noah -- donning a brown bow tie and getting a huge reaction
from his hometown crowd -- was taken by Chicago two picks later.

"This is an unbelievable experience," Horford said. "Winning
two national championships. Moving up to the next level is unreal."

Two more Gators went in the second round: Chris Richard at No. 41 to Minnesota and Taurean Green by Portland at No. 52. The five players equaled the second-most for one school in a draft. UNLV had six in 1977 -- though that came in four rounds.

The Hawks passed on Mike Conley, even though they still
need a point guard after passing on Chris Paul and Deron Williams
two years ago. The Memphis Grizzlies quickly grabbed Conley, Oden's
teammate since their junior high days and the third freshman in the
top four picks.

The Milwaukee Bucks took a chance at No. 6 on the draft's mystery player, Chinese forward Yi Jianlian. Though Yi was getting plenty of attention -- half of the record 60 international media
members were from China -- he came with plenty of question marks. He hasn't played against top competition in the Chinese leagues, and he is rumored to be older than the 19 he is listed.

Milwaukee also ignored concerns that Yi only wanted to play in a
major market with a large Asian population. He didn't even work out
for the Bucks.

"It's a surprise to me as well, because when I was in China, Milwaukee didn't come to watch me play or work out," Yi said. "Myself, I'm not really familiar with the city, but I'm happy with the team and I'm happy to play in the NBA."

Wright and Hawes were the fourth and fifth freshmen taken in the top 10.

"Freshmen are very, very talented," Law said. "I think in the draft, it's all about position and what a team needs, and you see some great, great players in this draft. I'm happy with the team
that I went to and just happy to get to Atlanta and help turn that franchise around."

Thaddeus Young (Philadelphia, No. 12) and Javaris Crittenton (Los Angeles Lakers, No. 19) gave Georgia Tech two first-rounders. Sean Williams (No. 17, New Jersey) and Jared Dudley (No. 22,
Charlotte) did the same for Boston College -- though Williams was kicked off the team last season for rules violations.

The Pistons added Eastern Washington guard Rodney Stuckey with the 15th pick while the Wizards chose USC's Nick Young with the 16th pick.

The Heat and Sixers later swapped picks, as Smith went to Philadelphia in exchange for Cook, a 2009 second-round pick and cash considerations.

The Knicks added small forward Wilson Chandler of DePaul with the 23rd pick.

ESPN's Ric Bucher reports the Suns agreed to trade the rights to their No. 24 pick (Rudy Fernandez) to Portland in exchange for cash.

The Utah Jazz selected Rice's Morris Almond with the 25th pick to address their need for a 3-point shooter.

Oregon guard Aaron Brooks was chosen by the Rockets with the 26th pick. Houston acquired Mike James in an off-season trade that sent Juwan Howard to Minnesota in an effort to shore up their point guard play.

Phoenix chose Alando Tucker, of Wisconsin, with the 29th pick and the Sixers closed out the first round of the draft by choosing Finland's Petteri Koponen with the 30th pick.

The Sixers then agreed to trade Koponen to Portland in exchange for the 42nd pick in the 2007 draft and cash considerations.

Among the notable players chosen in the second round:

• Gabe Pruitt, who led USC with 47 steals last season, was chosen 32nd by the Celtics.

• The SEC made its mark as Davis, Davidson, Richard, Vanderbilt's Derrick Byars (No. 42, Philadelphia) and Green were second-round draftees.

• Nick Fazekas, the three-time WAC Player of the Year, was chosen 34th by the Mavericks. His teammate, Ramon Sessions, went 56th overall to the Bucks.