The Celtics agreed to take center Raef LaFrentz and the six
seasons remaining on a $69 million, seven-year contract signed before last season. 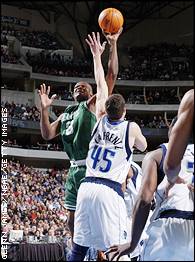 The Celtics also get Jiri Welsch and Chris Mills, players the Mavericks got in an offseason trade that also brought Antawn Jamison from Golden State, and Dallas' first-round pick in 2004.
The Mavericks will get guard Tony Delk from Boston.

"It's not every day that a 27-year-old All-Star becomes
available," said Donnie Nelson, Dallas' president of basketball
operations. "We feel we've got one of the most versatile coaches
in the league. To add a player of Antoine's ability just gives
(coach Don Nelson) more options to work with."

Nelson struck the deal with Danny Ainge, who became Boston's
head of basketball operations in May. The two are close friends,
with Nelson having been an assistant to Ainge in Phoenix.

Between his jobs with the Suns and Celtics, Ainge was a TV
analyst and he said on the air he did not like Walker's game. Since
joining Boston, he's said he had no intention of trading Walker.

Now Walker, a three-time All-Star who averaged 17.3 points and
8.7 rebounds last season, goes from playing alongside one high
scorer in Paul Pierce to being joined by four: Dallas' nucleus of
Dirk Nowitzki, Steve Nash and Michael Finley, plus Jamison, who was
added in August.

The Mavericks, the NBA's highest-scoring team the last two
years, have now upgraded a roster that won 60 games and reached the
Western Conference finals last season. It also counters the changes
made by fellow Western Conference opponents San Antonio, Sacramento
and the Lakers.

"Dallas likes to take chances and make things happen. They're
on the cusp of winning a championship right now," Ainge said. "I
can't sit here and tell you that we're an NBA championship team
right now. I just don't see that. But I'm not satisfied winning 44
games."

Walker has size (6-foot-9, 245 pounds) but can run the offense.
His dribbling and passing skills make him the prototype "point
forward" coveted by the Mavs coach.

Walker led the Celtics in assists the last three seasons, and he
and Pierce combined to average nearly half of Boston's points
during that span.

"We see Antoine as a triple-double guy," said Donnie Nelson,
the coach's son and an assistant coach. "I know in some form or
fashion at the end of the game you're going to see the Big Three
and Antoine Squared."

Donnie Nelson said Nowitzki will get more minutes at center.
Shawn Bradley and Danny Fortson, also acquired in the Golden State
trade, will help man the position. Eduardo Najera could play there,
too.

Delk will be a backup swingman, with Travis Best still the
primary relief for Nash. Nelson said Delk may be able to provide
some of the intangibles lost when Nick Van Exel was sent to Golden
State.

"He's not afraid, he's tough and experienced," Nelson said,
referring to Delk. "He's got a knack for making big shots and big
plays."

LaFrentz was acquired from Denver at the trade deadline two
seasons ago, then re-signed last summer. He was mostly a
disappointment last season, averaging just 9.3 points and 4.8
rebounds.

The Mavericks had coveted Welsch in their trade with the
Warriors but were willing to give up on the project to upgrade
their roster now. The 6-foot-7 swingman from the Czech Republic was
a first-round pick last season but saw limited time as a rookie
with Golden State.

The oft-injured Mills was seen as a trading chip from the time
Dallas acquired him. The forward played only 112 games the last
four seasons but has a big contract that expires after this year,
which will help the Celtics clear room under the salary cap. He
hasn't played this preseason.