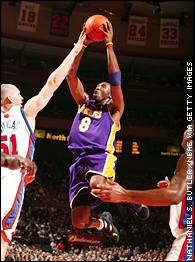 How do you stay focused through all of the distractions?

Bryant: Faith. I have my good days and I have my bad days, you know what I mean? If I just have faith, God will carry me through.

Will a hostile environment help the situation?

Bryant: I heard it was hostile in here about five minutes ago. (Laughter) You know I always love coming to New York. I love the city. I love playing here. I'm anxious to get out there and play.

Because you've always played in the spotlight, does it make it any easier for you?

Bryant: Well, it's been a little harder. (That changes) when I get on the floor, start playing. Everything has been more difficult than in the past. When I play, everything feels good.

What kind of support have you gotten from your teammates and coach?

Bryant: You know what, the organization has been very supportive, making sure everything runs smoothly. The players, even though they don't have to, have showed the support they have for me by rallying around me (whether it's) throwing cameras out of the way or making sure everything's running as smoothly as possible with me and the fans and the media or whatever. I really appreciate that because they don't have to do that for me.

With all of the new faces, is basketball coming easier for this team?

Bryant: I think we're doing a pretty good job considering all of the circumstances. Everybody thought it was going to be truly difficult. But we've been able to work everything out and just play. There have been games where we've struggled, but it's all part of the process. We'll get there.

Have the games been easier or harder for you?

Bryant: It's just been hard for me from a physical standpoint because I'm still trying to get myself back in shape. Some games, my legs feel great. Other games, they don't. So I've kind of had to adjust my game a little bit. But playing with so many great players makes it a lot easier. I don't have to step up and play as well as I did last year.

Why were you so down after last night's loss at Detroit?

Why was the rest of the team so down, though?

Bryant: Well, I mean, we wanted to kick the road trip off the right way. Unfortunately, we weren't able to do that. Everybody was upset by the fact that our defense collapsed. In the fourth quarter we weren't getting any stops. We're accustomed to doing that, and it just didn't happen for us.

But is this team together?

It's a process. It's just the beginning of the season. But we're getting there. We're making strides.

How is this team feeling facing a back-to-back game on the road?

Kobe, has your approach to life changed?

Bryant: Yeah. When you go something like I'm going through ... Everybody in this room has something that they're going through. Everybody has their breaking point. And I've been there. And it brings you closer to God.

Did you ever think you were at your breaking point?

How did you get around your breaking point?

Bryant: Faith. There's no other way to go.

Bryant: Faith and God. I just had to put it in His hands and allow him to carry me. Because you can't carry it yourself. It's too much, too heavy.

Has the fan reaction been as bad as you expected?

Bryant: I don't know. I mean, I go in expecting the worst. Some arenas have been great, some not so great. There's nothing I can really do about it. We just go out and play the game. Whatever happens happens. Whatever the things they say to me, I can't change that. I can't affect that.

What is the "worst"?

Bryant: People talking about my family. They have nothing to do with my situation. You know, dragging them into it and saying false things about them. That really pisses me off. There are obvious things I won't get into, but it's a combination of everything.

If you had a chance to talk to a young star coming into the league, what advice would you give him?

Bryant: Just to be yourself. Be yourself. Everybody makes mistakes. Nobody's perfect. Anybody makes mistakes. ... People who expect you to be perfect are terribly wrong. They're just making a mistake themselves. So I think just live your life to your best abilities and try to be a good human being and maximize the blessing that God has given you.