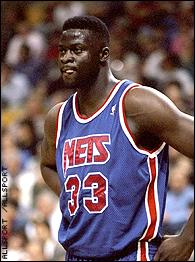 A medical examiner determined that Dare, pronounced dead Friday
at Englewood Hospital after being rushed to the emergency room, had
a heart attack due to an arrhythmia condition that was discovered
when he was in college at George Washington.

He collapsed while preparing breakfast after a routine morning
workout at his home.

The 7-foot-0, 265-pound Nigerian center played 110 games in four seasons
with the Nets, averaging 2.1 points and 2.6 rebounds. He had only
four career assists, none in his first two seasons.

While at George Washington, he led the Colonials to consecutive
NCAA tournament appearances under coach Mike Jarvis. Dare, who spent his prep years at Milford Academy in Milford, Conn., left for the NBA after his sophomore season at GWU.

Dare is survived by his parents, Gabriel and Joan, and two
sisters and a brother.